Three new recipes today, and two out of three will be repeated.

For dinner, I made Portobello Melts, Chopped Bacon Lettuce and Tomato Salad and Black Magic Cake for dessert. The Husband won’t go near mushrooms, so the Portobello Melts were ALL MINE. And it’s a good thing, because they were absolutely, positively delicious. This recipe comes from Penzey’s magazine, One. I don’t subscribe, but got a free issue in the mail the other day. I served them on English Muffins, instead of the Texas Toast (had to save SOME calories), and used Port Salut instead of Provolone, since I had some on hand already.

The Chopped Bacon, Lettuce and Tomato Salad was real easy to throw together, and this recipe comes from a local newspaper. I gotta tell you, I was a little hesitant about 1/3 cup of mayo being the only dressing, but it worked. Very flavorful, and a great use of juicy Jersey tomatoes (although it took me awhile to find some juicy ones; the ones at the grocery store looked a little anemic). Recipe calls for a full head of lettuce; I used 3/4 of the head, and that worked just fine.

The Black Magic Cake recipe comes from another blogger and I loved how quickly it came together. For a very simple bundt cake, it does the trick. Dense and fudgy, it certainly presents nicely. If I made it again, I’d top it with some chocolate drizzle or something similar, because I think it needs it. Not being a big bundt cake fan to begin with though could be coloring my objectivity. You might like it adorned with just confectioners sugar. The recipe calls for 1 cup of coffee. You might laugh, but I haven’t the faintest idea on how to make coffee. I don’t drink the stuff, so I don’t need to know how to make it, you know? The Husband has a special Cuban coffee he makes, so he’s taken over that area, and that’s just fine by me. For the cup of coffee, I used instant Espresso and it worked fine.

We ran out after dinner tonight, and on the way home, Nicholas called out a request for Dunkin Donuts, “munchkins AND chocolate.” I yes’d him away and The Husband ran in to get Nicholas’ treat. I forgot what the “chocolate” meant, but after The Husband placed the order (of course!), I remembered Nicholas recently became fond of the Chocolate Frosted donuts, so I called The Husband while he was inside the store, and although I couldn’t see his face, since we were in the car waiting for him, I’m SURE there was a big eye-roll as we modified the order. NO, Nicholas didn’t eat ALL this stuff right before bed. He had half his donut, and the rest he’s saving until tomorrow, after telling The Husband in no uncertain terms that they were HIS donuts and he was not to touch them.

In case you didn’t hear the news, Laura Bush finally decided on the new Head Chef for the White House (Cristeta Comerford), the first woman Head Chef ever, and the honor goes to someone who’s been there for 10 years. I’m really glad they hired from the inside, even if it was after their “competition” to find the best candidate. I thought it was funny that the requirements included being able to make Chicken Mole, Chicken Enchiladas, gourmet aandwiches and hamburgers … not too much of a challenge for a lot of us. Planning meals for 2000 guests monthly sure would be fun, though stressful.

For those who live in NJ and are looking for local Farmer’s Markets (in response to a few e-mails I’ve received), you may want to check out this link to find one near you.

Anyways, off to spend some time with my munchkin. Until tomorrow… 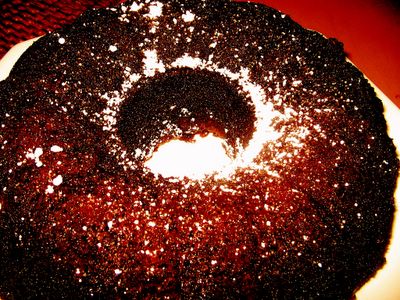 You can tell who licked the bowl after I made the Black Magic Cake: 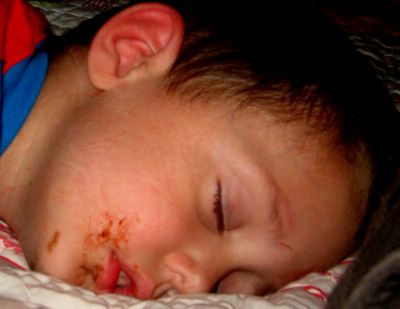 Gently rinse and clean the mushrooms; pat dry. Place in a bowl and carefully toss with seasoned salt and 1 tablespoon oil. In a large frying pan, saute onions in 1/2 tablespoon oil over medium heat until brown, about 5 minutes. Remove and set aside. Carefully place mushrooms in the
pan flat side down (start the toast now). Fry for 2 minutes then gently turn each piece. Fry for another 30 seconds then arrange the mushrooms
into 2 lots, roughly the shape of the toast. Top with a slice of provolone then cover the pan for about 30 seconds until the cheese is melted. Slide a spatula under the mushrooms, trying to keep the shape, and place on the toast. Top with onions and serve.

Cook bacon until crisp. Drain on paper towel. Meanwhile, core the tomatoes, cut them in half horizontally and scoop the seeds out with your finger. Don’t be obsessive about getting every seed, but just go quickly through. Chop the tomatoes into 1-inch (or so) pieces and place them in a bowl with mayonnaise, salt and pepper. Cover and chill at least 30 minutes, or several hours. Before serving, chop lettuce and bacon, add to bowl and stir to coat evenly. Serve with grilled sirloin or other steak, or as a side to hamburgers, and accompany with corn on the cob. Serves four.

Cate’s Note: I also added some ground black pepper in with the salt, used only a pinch of cayenne instead of the 1/4 tsp and used 15 pieces of bacon instead of 6. Delicious!

Lastly, here’s the Gourmet Chicken Pizza we made for dinner last night. This one comes from AllRecipes’ web site.

Preheat oven to 425F. Lightly grease a pizza pan or medium baking sheet. Place chicken in a large skillet over medium-high heat. Cook until no longer pink and juices run clear. Cool, then either shred or chop into small pieces. Unroll dough and press into the prepared pizza pan or baking sheet. Bake crust for 7 minutes in the preheated oven, or until it begins to turn golden brown. Remove from oven. Spread ranch dressing over partially baked crust. Sprinkle on mozzarella cheese. Place tomatoes, green onion and chicken on top of mozzarella cheese, then top with Cheddar cheese. Return to the oven for 20 to 25 minutes, until cheese is melted and bubbly.