The first day of our official The Husband Cooks Wednesdays. Although he does cook every now and then, it’s nice to have a set day where I don’t need to do any planning. It’s all about him. I had some chicken thighs and drumsticks in the refrigerator, so he ended up using that and making his very delicious roast chicken. Not sure about his method since he usually wings it, but it involves green olives, chicken broth, mojo and seasonings. Whatever he does, it works. He also made rice and black beans. As often as he makes that (a couple times a month), tonight was the best he’s ever made it. Now if only he would write down what he’s doing, he could reproduce it. :)

Nicholas told The Husband that his dinner was good, and I told him that every Wednesday, Daddy would be cooking dinner. Nicholas then asked if he could make dinner tomorrow night. I said sure.

“But I have to be careful so I don’t burn my fingers, right?”

“Yes, you do.” (Of course, we’re not going to let him anywhere near the stove by himself).

We’ll play along tomorrow to see what menu he comes up with. Brace yourselves … it could be a granola bar with yogurt drink. Healthy, yes, but we might be a bit hungry later on.

Had a few requests for the “recipe” for the Bhel Puri I made yesterday. Like asking an Italian how they make their lasagna, the more people you ask, the more different recipes you’ll get. It’s the same with Bhel Puri, which you can see by googling it. I got my recipe from our old neighbors, who are Indian, and it could not be simpler. More layering, than a recipe per se.

Put a thin layer of siev noodles on your plate (thin crunchy noodles that you can find in an Indian store).
Top with boiled, cooked potato, finely chopped (I used two potatoes for the dish pictured yesterday; enough for 2 of us)
Then add a layer of diced tomatoes (I used 3)
Add a layer of finely chopped onion (I used half an onion)
Dollop plain yogurt over it
Top with a little bit of garam masala powder (again, found in an Indian grocery store; drop me a line if you can’t find it)
Dig in!

Since today’s the last day of the month, I rounded up all the new recipes that I made for the month. I’m pretty pleased with myself – 34 new recipes! I’ve listed them below, in case you’ve missed any. If you need to find one of the recipes listed, you can type it into the search box at the top of my web site and it will use google to bring up the referenced posts.

Nicholas’ latest favorite activity is walking around with my shoes on, cracking himself up hysterically in giggles while doing it. Very cute at 3. When he’s a bit older, we’ll have to have a talk though. 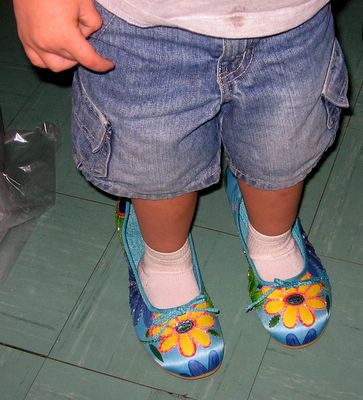 All for tonight. Tune in tomorrow to see what Nicholas plans for dinner. Should be interesting.