Got home from work a little late today as we had a zillion pressure-deadlines to meet. Luckily, it was The Husband Cooks Wednesday so I didn’t have to worry about dinner – that’s definitely a nice perk at the end of a hectic day. Called The Neighbor on my way home and she sent The Girlfriend down to stay with us for awhile to give them some respite. She asked her, “Do you want to go to Nick’s house?” Funny, as though the answer would ever be “no!” They had a great time, and The Girlfriend happily ate The Husband’s cooking, even thanking him for the meal at the end.

They both needed baths and I decided to be brave and take the duty on. A lot of pressure keeping them from seeing each other naked and the bubbles in just the right places at all times. They had a blast though, and were in there for a good 45 minutes, neither of them wanting to come out. I don’t think their fingers and toes could get any more wrinkled. Towards the end, they were even taking turns washing each other’s back. 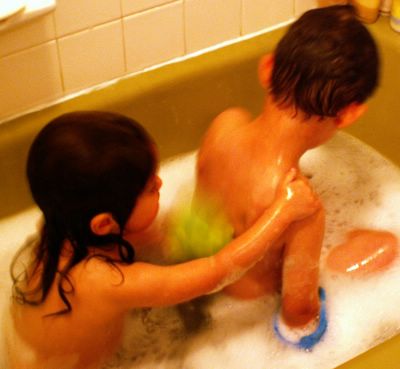 They didn’t want to part ways at the end of the night, but we gently explained to them that they’ll see each other at school tomorrow morning, and then again tomorrow night. Tough getting in the middle of true love like that, but after walking The Girlfriend home, Nicholas happily went for the cookie jar, knowing he didn’t have to share. ;)

Finally downloaded the picture of the Roasted Tomato and Prosciutto Salad recipe I made a week ago. The picture doesn’t do it justice, since it’s taken with a new camera I haven’t gotten the hang of yet. The word “salad” in the title is there because there was watercress to be added as part of the recipe, but I nixed that part, and it’s definitely not missed; so we’ll have to rename the recipe, otherwise it probably doesn’t make sense. If you didn’t already print out the recipe, GO! It’s a good one, a few steps, but great presentation and delicious. Also downloaded the picture for the pasta we had the same night. Although it certainly looks pretty, it wasn’t a WOW for us, and won’t be repeated. 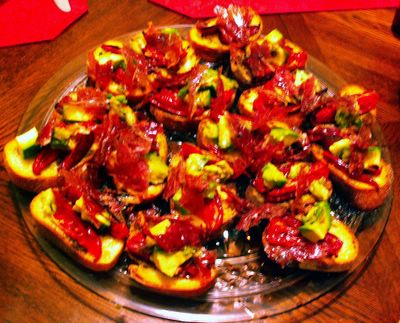 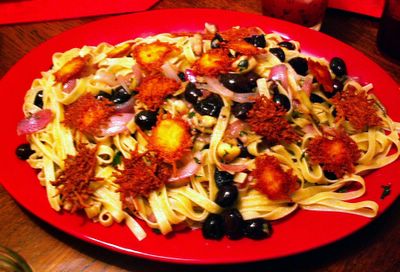 There’s a new Indian restaurant that opened up nearby, and I think we’re going to get some takeout from them tomorrow. The Husband has had a craving for it the past few days, and my office offered to pay for take-out dinner tonight since it was a crazy day, so feeding Ths Husband’s craving and someone else pays, who am I to say no? Until tomorrow…