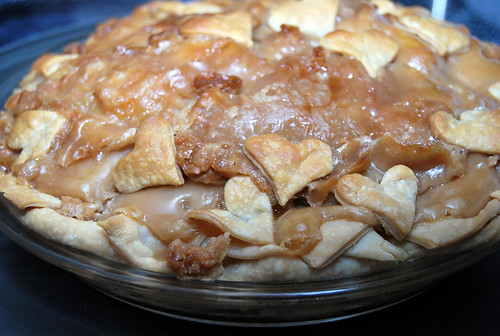 I tend to be pretty picky with my sweets; I just happen to prefer salty over sweet.  The Husband?  Even more so.  I can probably count on one hand the desserts he will gravitate towards.  When I make one of the “chosen few,” he will demolish them with reckless abandon.  Last weekend, I made one of his favorites, Mini Cheesecakes.  I think he probably polished off a good 8 or 9 on his own over two days.  ‘Course he happens to have, for the most part, the type of metabolism that can handle that.  He’s lucky that way.

One of his “go-to” desserts is apple pie, so when faced with a still-too-full bag of apples from Costco, I thought it was high time to make apple pie.  After all these years that we’ve been together, I think this might actually be the first apple pie I’ve made.  I stumbled upon a recipe on AllRecipes website that looked easy enough to take for a spin.  When considering recipes to try from there, I usually glance at the first handful of reviews and decide from there.  This recipe for Grandma Ople’s Apple Pie has, as of right now, 562 reviews.  To me, I think that’s a little crazy.  I mean, really, how many people need to say it’s a good, solid recipe before we can be convinced to try it?  Now, granted, many of them have tweaked the recipe here and there, and have offered their suggestions, but 562 reviews?  Crazy.

That being said, if you have a hankering for apple pie, it doesn’t get much easier than this one.  I sprinkled a little bit of cinnamon on the apples before topping with the crust, but otherwise didn’t tinker with the recipe.  When pouring the topping over the crust, I put the dish on a baking pan (and baked it like that as well) to catch any potential spillage.

The end result?  Homemade apple pie with no fuss or muss … and I didn’t need to read 562 views.

Grandma Ople’s Apple Pie
Recipe courtesy of AllRecipes.  Submitted by Moshasmama
“This was my grandmother’s apple pie recipe. I have never seen another one quite like it. It will always be my favorite, and I hope it becomes one of your favorites as well!”

Melt butter in a sauce pan. Stir in flour to form a paste. Add white sugar, brown sugar and water; bring to a boil. Reduce temperature, and simmer 5 minutes. Meanwhile, place the bottom crust in your pan. Fill with apples, mounded slightly. Cover with a lattice work of crust. Gently pour the sugar and butter liquid over the crust. Pour slowly so that it does not run off. Bake 15 minutes at 425 degrees F (220 degrees C). Reduce the temperature to 350 degrees F (175 degrees C), and continue baking for 35 to 45 minutes.