A dinner at the American Bounty restaurant, located on the Culinary Institute of America’s campus. An upscale dining experience with the menu to match.

When I traveled to Rhinebeck, New York in February, part of the weekend festivities included dinner at the American Bounty restaurant on the Culinary Institute of America’s property. Staffed by the CIA’s students and graduates, it is a fine dining restaurant with perfect table settings, attentive service, and a carefully paced meal. Its focus is the farm-to-table experience, and many of the ingredients come directly from the Hudson Valley area.

To say we were in for a treat would be an understatement. 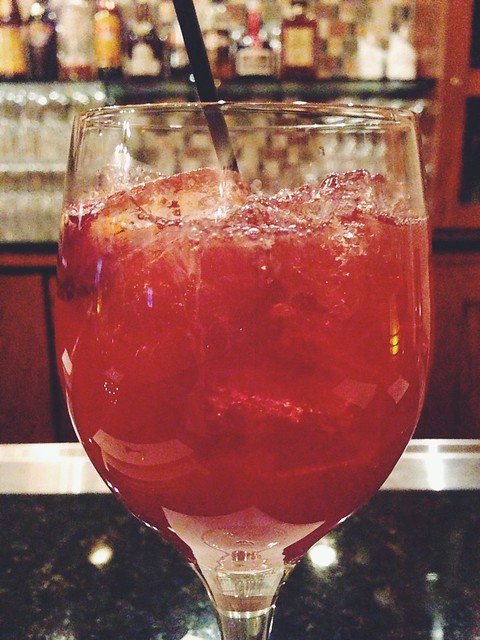 The menu was filled with seasonal items, and many specialties. I had heard good things about their new Pastry Chef, namely that she was into fun desserts that bordered on scientific experiments, but I tried my best to focus on first things first.

Any time I’m out in a restaurant, I try to order things that a) I don’t usually cook at home and b) items I’ve never had. And this particular weekend was no exception.

Once I saw cage free foie gras on the menu, it was a given that I would order it, although it was hard to pass up the Prince Edward Island Mussels. Beautifully presented and perfectly proportioned, the foie gras was soft and smooth and everything it should be. Served alongside a smear of dipping sauce and several slices of toast points, it was devoured pretty quickly. (I *did* have a bite of the mussels as well, and they were garlicky and tender, and served in a generous portion.) 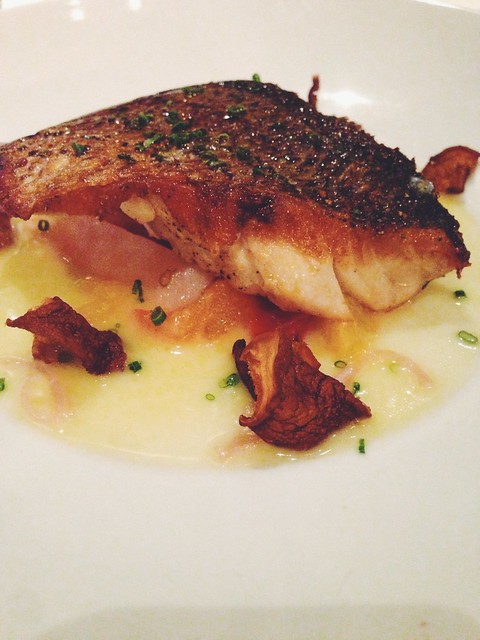 For my main course, I went with Wild Striped Sea Bass, with a crispy skin, kohlrabi, and shiitake mushrooms. It also featured a white wine butter sauce and it was amazing. Had I not been in the company of the Jones Dairy Farm team, I would have licked the plate clean. It was my first time having sea bass, and it won’t be my last. Expertly cooked and flaky bite after bite.

And now for dessert. As I mentioned, my expectations were pretty high given what I had heard about the Pastry Chef, and the description of each dessert made it hard to choose just one. Most of us chose a different item so we could pass around our plates and share. Since we were in New York, and I’m a sucker for cotton candy, I went with the flight of New York-inspired sweet bites. 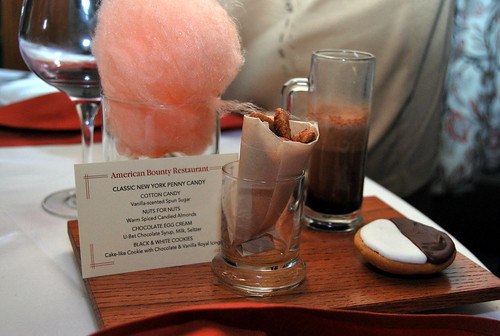 It was uniquely presented, expertly described, and I was so ready to love it.

It fell completely short for me. And could be summed up with one word: meh.

I ate the cotton candy (it was fine), and shared the nuts and the traditional Black & White cookie, neither of which got rave reviews from the others either. It was one of those things that you really wanted to like.

One of the desserts was a performance piece. A giant chocolate egg-shaped ball comes out and the waiter pours a hot chocolate sauce over it. As he does, the ball opens as a flower bloom would, and there is an edible chocolate box inside. It was something to see for sure, and as long as you love chocolate, it received rave reviews.

That being said, the foie gras and sea bass were indisputably the highlights of the meal, and were definitely worth the visit alone.

Hungry for more Hyde Park/Rhinebeck, New York posts?
The Beekman Arms is the hotel that we stayed at downtown, ghosts notwithstanding.
There are lots of quaint shops in Rhinebeck that are worth a visit.
Pack a picnic lunch and visit a few of the area mansions.
And the reason for the whole visit? Meeting the nice folks at Jones Dairy Farm.