A tranquil beautiful setting tucked into Summit, the Reeves-Reed Arboretum is a great spot for a visit. 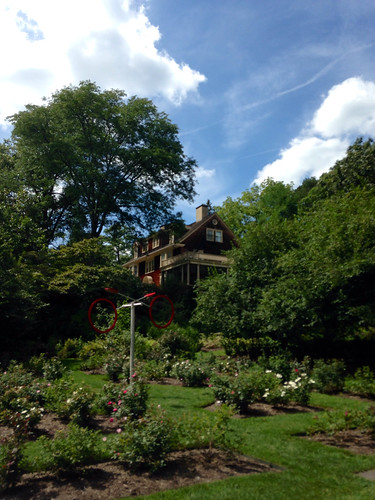 “Visit an arboretum” was on our Summer Bucket List because, although we have several arboretums in the area, we haven’t really visited one (although our annual visit to the gingerbread exhibit is at an arboretum, there is nothing floral to see in the dead of winter for sure). The bright skies and warm temps this afternoon made it a great time to visit (and a Groupon for frozen yogurt down the street turned it into a perfect afternoon).

The arboretum is very easy to find in a residential section of Summit. When I first saw the entrance gate, I thought it was closed, but as you approach slowly, it opens automatically, so don’t let that deter you (and the exit/gate is the same way). The property has several small houses/offices, and the starting point wasn’t entirely clear, but we found someone in the parking lot to ask and she pointed us to one of the smaller houses near the parking lot and greenhouse. In there we found a really friendly employee (and thankfully restrooms), who gave us a map and explained the different trails we could take through the property. She cautioned against going on one of the trails because of some recent overgrowth of poison ivy, and then she handed us a bag of fish food and asked us to feed the fish in the pond on the way through. She also told us where to find the (one) resident frog, who was exactly where she said he would be. She was awesomely helpful!

You have to look really closely, but he’s in this picture. I was actually surprised when we found him. 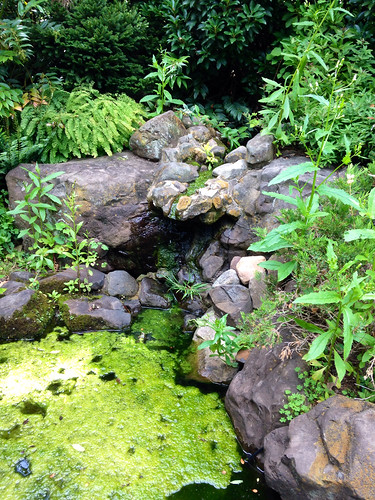 We took the path through wildflowers behind the building that housed her office and continued down to a path that led us to the Elephant Tree that she mentioned (which could not be more appropriately named), with a really cute picnic area, which reminded me of something out of The Flintstones. 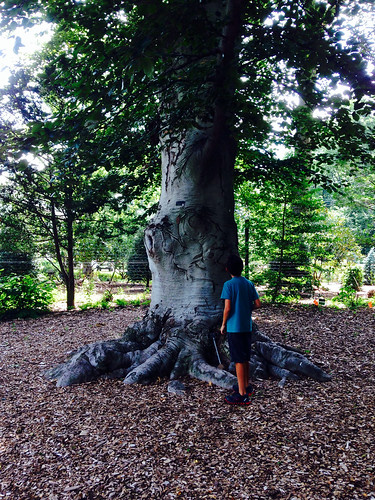 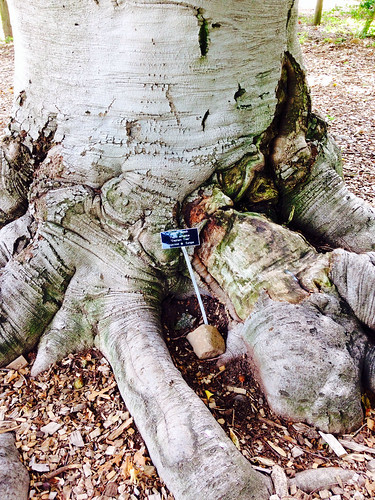 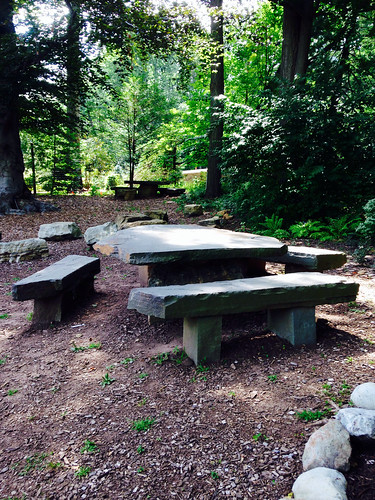 Throughout our time there today, we discovered many little trails, walkways, paths, and surprises tucked around nearly every corner. And with the blooms all over, it smelled seriously amazing. 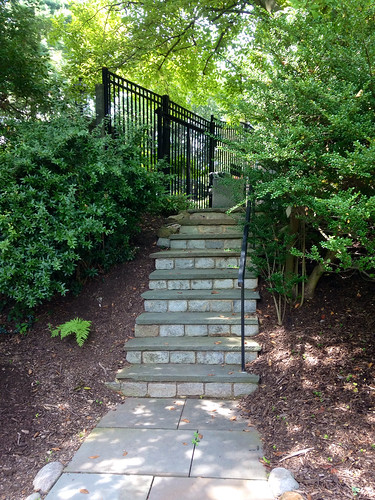 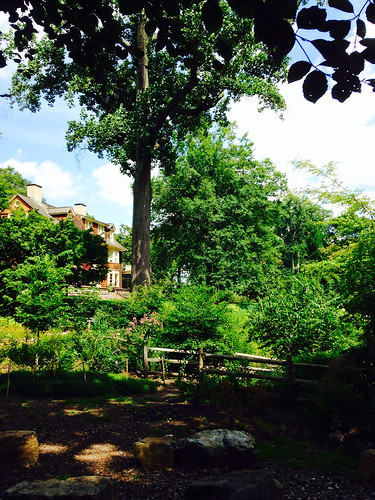 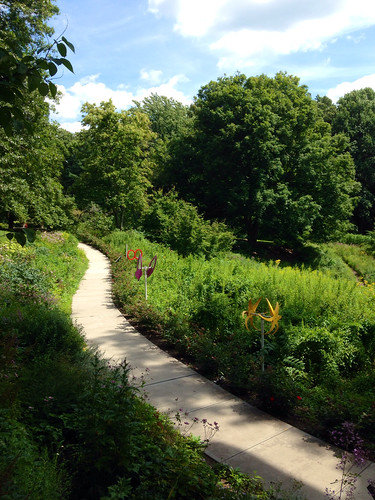 There are a number of areas that would make awesome picnic spots, and some visitors were definitely taking advantage of the gorgeous weather we are having. There were a few people visiting when we were there, but the arboretum seems like a well-kept secret otherwise. There is no admission cost, but there was a box near the greenhouse for optional donations. 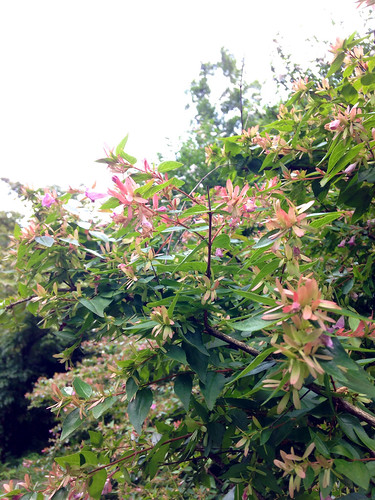 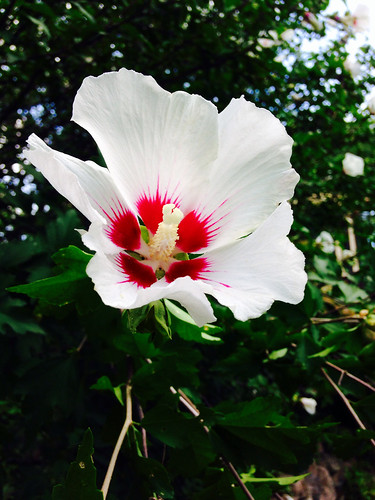 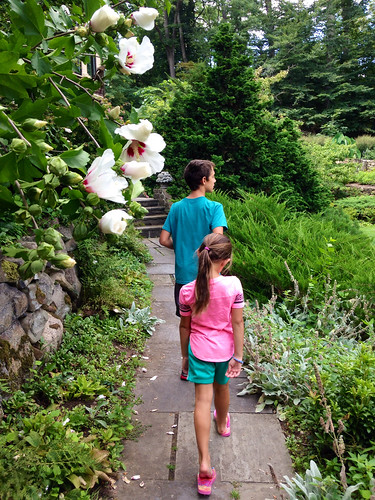 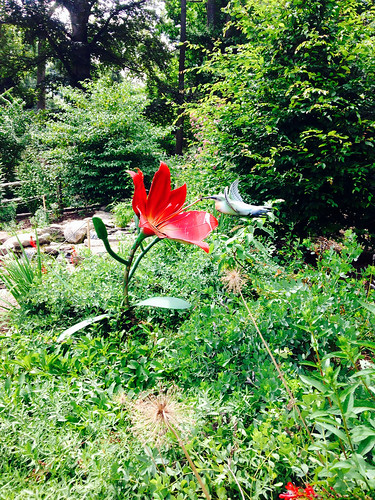 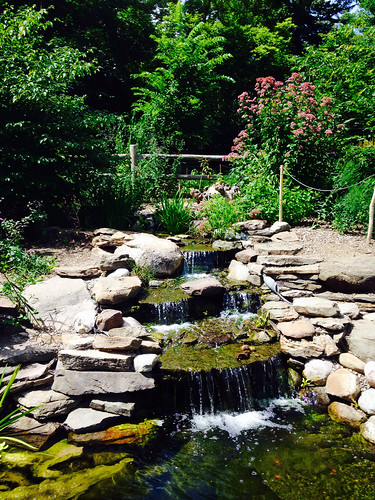 We also have “visit a new waterfall” on our Summer Bucket List, and we may just use the above the cross that one off too.

Originally created in 1889, the estate and landscaping has been added to with each of its owners. The owners in 1916 added significantly to the daffodil plantings, which make the property a huge draw in the Spring season, and the beautiful rose gardens were added in 1925. In the late 1960s, the property had the last of its private owners. In 1974, the citizens of Summit, along with the Reed family, raised money to maintain the property as an arboretum, and the City of Summit became its eventual owner, along with an adjacent property. The arboretum and its property does not receive any funding from the town as it all comes from visitor donations and fundraising. They have a number of different events throughout the year, including a Fall celebration, a camp out, and even cookies and cocoa with Santa.

If you some time, no matter the season, it’s a wonderful place to stop in … and exhale.

Hungry for more places to visit in New Jersey?
The Grounds for Sculpture property is a great place to spend a few hours, and the likes of which you won’t find anywhere else.
The lambing tour at Long Valley Creamery made for a fun afternoon, particularly because it included a cheese tasting. #cheeseismyhappyplace
The Sterling Hill Mining Museum is the perfect place to escape to on a hot summer day.
The Mega Train exhibit is back at the Morris Museum and worth a stop.
And for more day trips and fun places to visit, check out this Pinterest board.