Tasty little mushroom and sausage nibbles that are a perfect light appetizer when entertaining. 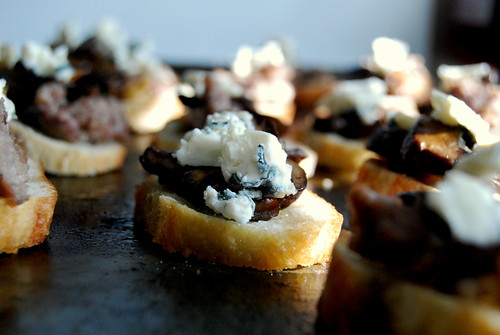 For me, recipe development is a very stream of consciousness type of thing, with one thought leading to another and before you know it, here we are with a new recipe. Inspiration can come from anywhere … a season, fresh produce, something random I saw on tv, farmer’s market goods, or a craving. Yesterday, while grabbing a few things off my grocery list at the store, I spied a basket of warm baguettes. And all of the sudden, I wanted crostini.

But not your every day summer crostini of mozzarella, sliced tomatoes, and basil.

Something a little left of that.

How about a nice thin, crispy slice of baguette topped with sauteed baby bella mushrooms, sausage, and bleu cheese?

Truth be told, I am forever looking for more ways to use bleu cheese.

The sausage I used was a pork sausage roll from Jones Dairy Farm. All natural ingredients and very gently spiced, it goes perfectly with the woodsiness of the baby bella mushrooms, and needs no extra spices or fancy ingredients. And because neither of my kids like mushrooms, this is an appetizer recipe I don’t have to share. Ok, well, I shared with friends next door. A little topping of melted bleu cheese, and it’s a nice little savory bite that comes together in about 15-20 minutes, give or take interruptions from little people.

END_OF_DOCUMENT_TOKEN_TO_BE_REPLACED

A frittata, taking full advantage of summer produce, perfect for a lunch or light dinner. 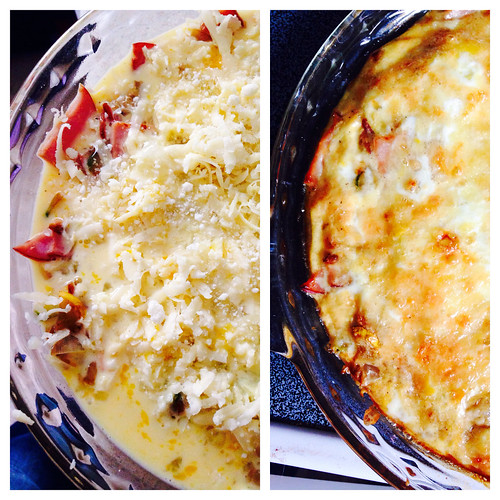 Warm weather means trips to the local farmer’s market to stock up on fresh summer produce like yellow squash and zucchini. These vegetables are so versatile they can lend themselves to many different dishes. They’re perfect sauteed and added to a light pasta, or mixed up with chicken in a stir-fry. But the way I love it the most? In a frittata. Frittatas are one of those great go-to dishes that are ideal for a light summer dinner, or to get a week’s worth of lunches made in one fell swoop. Once you have a basic recipe, you can mix and match the ingredients you add in, using up farmer’s market bounty, leftovers from your fridge, or favorite flavors of your family.

Since this is the season for squash and zucchini, and we had a lot of it from a recent trip to the farmer’s market, I added them to this most recent frittata. Also cheese. Because, well, cheese. If I can add cheese to a recipe, I will. Cheese is one of my happy places, no doubt. And this time, to add a little bit of salty crispness to the frittata, I added some frizzled bits of Canadian bacon from the folks at Jones Dairy Farm. 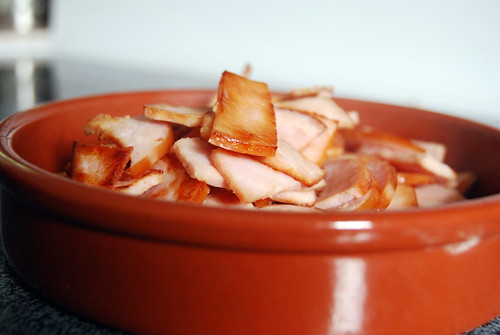 I love this Canadian bacon, so easy to use in a variety of recipes, and easy to find (even Costco has large packages of it). It’s great in breakfast sandwiches, stir fries, and, of course, this frittata. I might have swiped a few from the dish after they came out of the pan.

I mean. They’re all crispy, and juicy, and just bursting with flavor.

You totally would have done the same.

Just a few minutes of hands-on work, and 45 minutes in the oven, and you’ll have the easiest Summer supper yet. Or a week’s worth of lunches if your kids ::coughcough:: don’t like zucchini either.

This recipe was created as part of my ongoing relationship with Jones Dairy Farm. The last recipe I made for them was a delicious sundae using their cherrywood smoked bacon. You can find the recipe right here.

END_OF_DOCUMENT_TOKEN_TO_BE_REPLACED 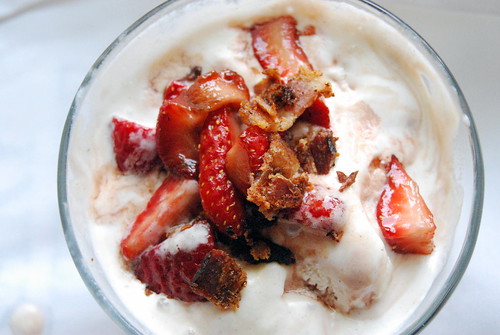 After meeting the team from Jones Dairy Farm back in February, I knew I wanted to work with them. For a variety of reasons. Because I loved their mission statement. Because their products contain no filler or unpronounceable ingredients. Because they are a family business. And, you know. Bacon.

My first assignment for Jones Dairy Farm was to create a recipe with their bacon. Not just any bacon, mind you. Dry aged. Cherrywood smoked. Thick cut. Pretty much the bacon to end all bacon.

In the grand scheme of things, it’s not hard to create a bacon recipe. But I wanted to do some out-of-the-box thinking with this one. Create something completely different. A recipe you wouldn’t have thought of on your own. 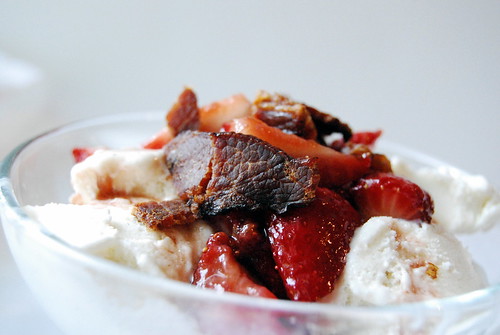 Now besides the fact that this recipe features bacon, tomorrow is also the kick off of National Ice Cream Month. Yes, a full month to celebrate ice cream. And this recipe to celebrate bacon.

I mean, life can hardly get better.

This recipe is super simple, and took full advantage of the fresh strawberries we picked recently. You’ll get a subtle, rich tang after you marinate the chopped strawberries in balsamic vinegar, and the extra juice is perfect when lightly drizzled over your ice cream. Top it with the crispy chopped pieces of bacon, and well, it’s honestly just awesomeness in your mouth.

And the neighbors I force fed it to completely agree. 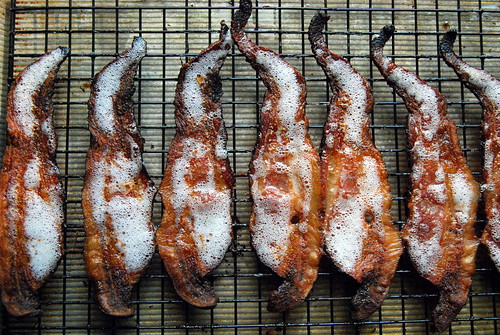 One more thing. I don’t cook the bacon in a pan. That’s so old school. I bake it in the oven. I’ve been doing it that way as long as I can remember and it’s the best way to cook bacon for three simple reasons:

2 – by putting it on a wire rack set inside the cookie sheet (as pictured above), you allow the bacon to get perfectly crispy from all sides

3 – the bacon doesn’t cook in the grease, as it would in the pan, since it drips to the bottom. which makes it a tiny bit healthier. and that means you can have more. You’re welcome.

Celebrate summer. And National Ice Cream Month. And most of all, BACON, with this simple, but blow-your-mind recipe.

For even more Jones Dairy Farm goodness, be sure to grab a copy of their just-released cookbook. It was put together to celebrate their 125th year anniversary and features many bacon recipes, along with highlighting their other products as well. Everything from breakfast to dessert is yours for the making. Free to download. 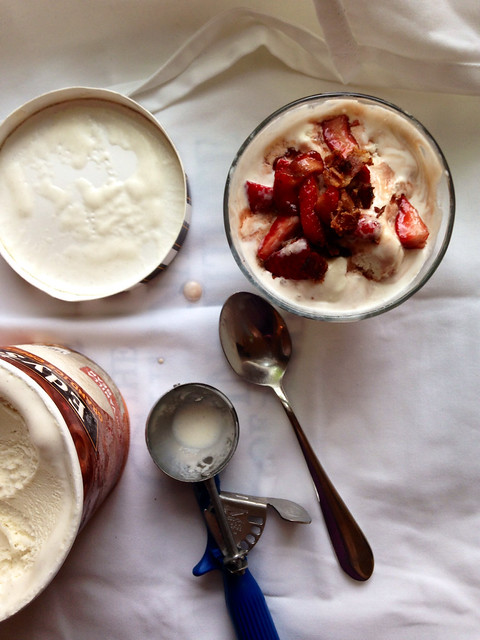 END_OF_DOCUMENT_TOKEN_TO_BE_REPLACED

My sister and I grew up on Jones Dairy Farm breakfast sausages. In fact that’s the first thing my Mom mentioned to me when I said that I would be meeting the folks from Jones Dairy Farm this past weekend. And both my own kids love sausages, whether for breakfast, lunch, or dinner, so it’s a tradition that has continued to this day.

So how was I going to say no to a weekend adventure? Especially when it was taking place at the Culinary Institute of America in Hyde Park, New York.

With iced coffee in hand, at the unforgiving time of 6:20 am on Saturday morning, I set out for the campus. The CIA side of the visit will come in another post, likely next week. For today, we focus on Jones Dairy Farm.

First of all, I hate to admit it, but I didn’t even know they made bacon. I don’t know if I just wasn’t paying attention, and maybe really did know but just didn’t know that I knew …? But that’s my story and I’m sticking to it. If you saw my bacon picture on Instagram on Saturday morning, you know what I thought about the bacon.

Just the perfect amount of crispiness, and fat, and chew, and black pepper.

And if we didn’t have a full day ahead of us that morning, I totally would have gone back for more.

In fact, I even texted Sarah across the table that we should, because, you know, there is strength in numbers.

END_OF_DOCUMENT_TOKEN_TO_BE_REPLACED

A super simple cauliflower recipe made in a way that you’ve never seen it before. Indian flavors, two steps, pure deliciousness. To say I have a new appreciation for cauliflower would be an understatement. Or, at the very least, an appreciation for turning cauliflower into something completely unique and different than how it originally started out. So when my friend Cathy sent me a recipe for a spicy whole roasted cauliflower, it immediately got added to my list of things to make.

Gone are the days when we just had straight up cauliflower smothered in melted cheese. Now we’re turning cauliflower into breadsticks and pizza, risotto and mashed potatoes, mac and cheese, and steak. In fact, I even have a cheddar and bacon cauliflower pancake recipe coming soon. I made tonight’s cauliflower recipe on Friday, and it ended up coming in handy this weekend. The basic premise of the recipe is you mix Greek yogurt with a handful of spices, cover the cauliflower with this marinade, and bake it in the oven for about 30-40 minutes. It could not get simpler than that, and beyond the simplicity of the recipe, I love the flexibility of it. Although the spices I used are Indian-influenced, you could mix and match any flavor profile you want. Make a Greek version with some oregano and lemon juice. Or perhaps an Italian version with oregano and basil, with maybe some sun-dried tomatoes thrown in for good measure. I honestly don’t think this recipe can be screwed up.

I made it on a night when I needed something easy that required pretty much no thought and ingredients I had on hand already. I didn’t have a dinner plan ready, and Nick had a dance to go to that night. I made the kids a tray of roasted broccoli (they’re not cauliflower converts … yet), and this for me. Leftover ribs for protein.

Now for the cauliflower story from this weekend… I spent Saturday at the Culinary Institute of America (CIA) campus in Hyde Park (more details on that coming later this week), and one of the things we did while we were there was to have a Chopped-style challenge. If you’re not familiar with the Food Network show Chopped, you’re basically handed a basket of ingredients and have to make something amazing with it. I, along with three other team members, was handed a basket that had broccoli, kale, bulgur, lettuce, cauliflower, oranges, and Greek yogurt. All those specific ingredients had to be used to create one main dish and one side dish in an hour, and we could also use any Jones Dairy Farm products we wanted, along with any herbs and spices in the CIA kitchen.

Once I saw the cauliflower and the Greek yogurt, it was a no-brainer, and I took the reins for making the side dish, while the other three team members worked on our main course.

There was a team of CIA chefs in the kitchen during our one hour of cooking time, offering assistance as we needed it, and doing some taste testing along the way. Two of the chefs were also judges, along with two members of Jones Dairy Farm. When Chef Michael came around and took a taste of my marinade (pre-bake), I watched his face for a reaction, and he said “Interesting.” I asked him “Interesting bad or interesting good?” “Just interesting. I can’t say anything else because I’m judging.”

Although I wasn’t worried, I was certainly wondering.