A healthy, super delicious two ingredient dinner that you can get on the table in fifteen minutes? YES, a thousand times yes. 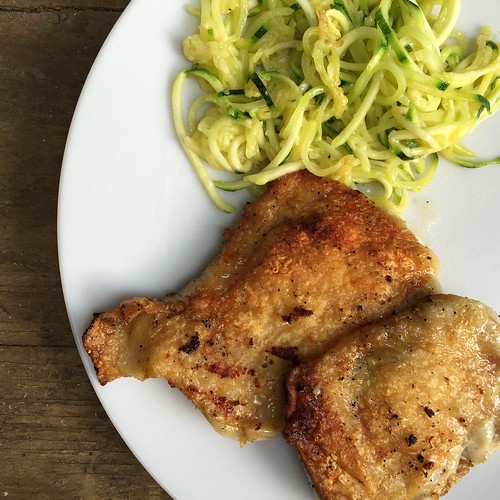 When you find yourself making the same recipe twice in less than seven days, you know it’s a winner.

I originally discovered it in the Nom Nom Paleo cookbook some months back, and finally got around to making it. I’m not even sure why it took me so long … oh, right. Too many recipes, not enough time. But now that I have, and again a second time, it is guaranteed to be in heavy rotation.

Because two ingredients (I’m not counting spices from your cabinet) and it’s both healthy AND delicious?

Bonus points for being kid-approved.

And it fits so many eating plans … Whole30, Paleo, Primal, clean eating… everything except vegetarian. Natch.

It calls for cooking the chicken thighs in ghee. Ghee is something I’ve been cooking with since I did my first round of Whole30 some months back. It’s clarified butter, which means it is butter without the dairy. You can definitely make it on your own, but, for now, I’ve just been buying it at the Indian grocery store. It’s super cheap there.

The recipe suggests buying a splatter guard, and although I hate have extra items in my kitchen, after making it twice already, I think I’m going to add one to my wish list. It’s not terrible without it, it would just save a few minutes of extra clean-up from the splatter.

Because you’re pounding the chicken so it’s very flat, which allows for even cooking, this cooks up in nothing flat. The ghee gives the skin a nice extra crispy coating. Almost like fried chicken, but not.

I cut the skin off Nick’s pieces, because he’s in a I-don’t-like-chicken-skin-phase, which was fine because it made the dogs happy.

Skin weirdness notwithstanding, it’s a meal that we all can agree on and love.

Make it; you won’t be disappointed. 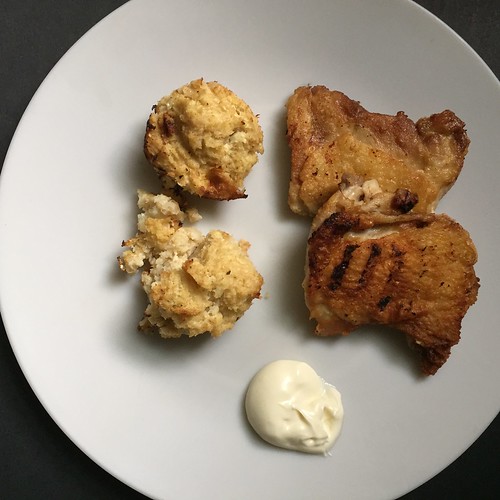 *last night, I served it with Baked Cheesy Cauliflower Tots and homemade mayo. Last week, as shown in the first photo, it was a side of zucchini noodles with Parmesan

END_OF_DOCUMENT_TOKEN_TO_BE_REPLACED

‘Tis the season for grilling, and this flank steak is the perfect way to celebrate warm weather foods, and it’s quick enough that you can enjoy it even on the busiest day of your week. 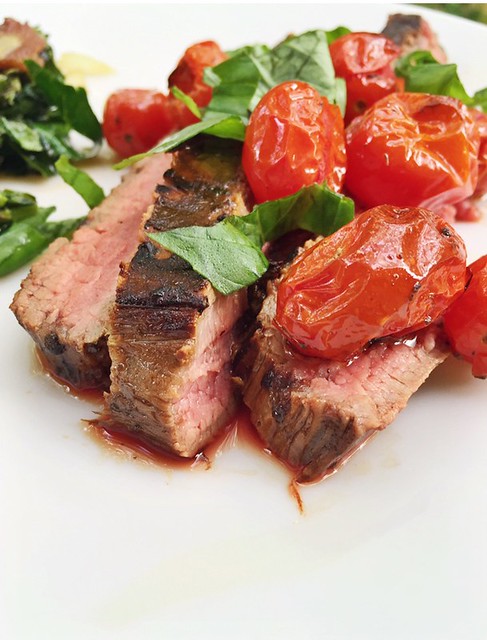 Every two weeks, we have a Girl Scout meeting in the evening and the timing of it usually means take-out on the way home, or scrounging through the refrigerator for leftovers.

But tonight, I made an effort to get dinner done before we even left.

I also needed something quick and easy, healthy, and that the kids would eat.

Delivering all the goodness of dinner cooked on the grill, this meal can be ready in thirty minutes, which includes the 15 minutes of marinating time.

That’s a movement I can get behind.

Once I started marinating the steak, I popped a tray of cherry tomatoes in the oven for roasting, and when the steak was done grilling, the tomatoes were done. The steak was then topped with the roasted tomatoes and torn pieces of fresh basil.

Whether you’re following Whole30, paleo, primal, clean eating … or just an eat-all-things-grilled lifestyle, this meal works out perfectly. In half an hour, you can get a complete dinner that you can feel good about serving your family.

Which is pretty much my favorite kind of meal.

*I said this was almost the meal I was looking for, because it failed to meet the kid-friendly part of my requirements. Madeline ate enough to get by and Nick reminded me that he’s “not a fan of steak,” and proceeded to microwave his until it no longer resembled what I made. Kids.