Happy Mother’s Day to all my readers – hope you enjoyed your special day.

I awoke to 10 white roses strewn across the bed. Geesh, when your day starts like that, it can only get better, right? The Husband and Nicholas brought me breakfast in bed … two eggs sunny side up, buttered toast, strawberries, chocolate milk and another two white roses. Then came the gifts. The TV in my kitchen broke a few weeks ago, so The Husband got me a really nice new flat screen TV. Gotta love that! He also put together a basket full of all sorts of spices, sauces and marinades, along with a wooden spoon and a red oven mitt. He went to Le Gourmet Chef for the first time on Friday and came out with all the goodies for the basket he put together. He had never been there before and deemed it a “really cool kitchen store” – pretty high praise coming from him. When I came downstairs, another dozen white roses were waiting for me.

And, of course, the most special gift came from my son. He made this necklace in school this week, and a card as well. All together now … “awwwwww…..” 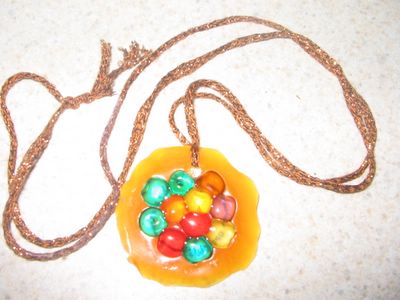 Dinner preparation was actually really relaxing today. I didn’t overdo it in terms of planning too many dishes, as I’m wont to do. I tend to usually make more than I need to for three reasons: a) variety for my guests, b) a chance to try out more recipes and c) more leftovers = less cooking later in the week.

I started with two Antipasto Platters. Coming from a pretty traditional Italian father, Antipasto at family gathering is always a must. 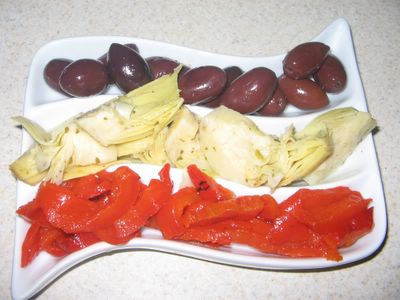 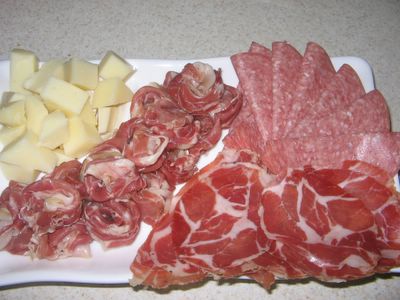 We’ve had the Hanger Steak three times now this week, so you know this one’s a keeper. Still flavorful, tender and really simple to make. 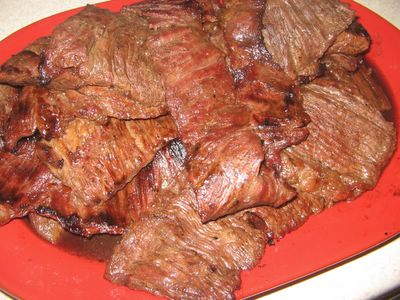 Only major drawbacks I had with prep work today were these dang olives. First of all, it’s an awful lot of work for something that you just pop into your mouth and eat in all of 20 seconds. Secondly, I think the taste of the actual olive is such a strong flavor, that you don’t know what it is stuffed with. Nobody could pick out the sausage flavor inside. A pretty time consuming recipe: first you have to remove all the pimientos, then stuff the olives with the sausage meat mixture, then sprinkle with olive oil, roll in flour, roll in eggs, cover with bread crumbs and THEN deep fry. Everyone seemed to like them – I doubled the recipe and only had a few left, but I don’t think I’ll make them again. 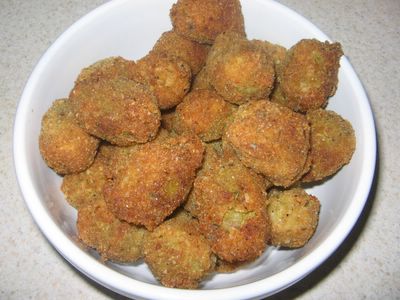 I served Roasted Potatoes with the steak, and it was a pretty standard recipe. Take 10 oz of small new potatoes and quarter them. Toss with olive oil, salt and pepper and bake at 375 for an hour. Hard to mess that up.

One other side item I made was Crostini with Blue Cheese and Honey. I sliced a loaf of Rosemary Bread and toasted the slices on a cookie sheet in the oven. Once toasted, I took them out, drizzled with extra virgin olive oil, topped with crumbled blue cheese and put them back in the oven for a few minutes, until the blue cheese melted. Once done, I drizzled it with a little bit of honey and a sprinkling of salt. Delicious! I would definitely make these again, and think everyone else agreed – only 2 pieces left.

For dessert, I had two things. First, the Dulce de Leche Brownies. A tried-and-true, these are always a hit.

Second dessert was an ice cream mix-in station. Just a fiddly thing, so I won’t be making this again.

All in all, an enjoyable, reasonably relaxing day … what more could you want for a Sunday?

Tune in tomorrow for highlights on this week’s activities. It’s gonna be a busy one!