I went to the Gourmet Food Show with my Mom today, and had a great time. It was about 50% smaller than the Food Network Expo we went to in Philly last year, and in terms of walking/crowds/shopping, that made it a bit more manageable. A few great finds there today, but first let’s talk about Paula Deen!

She was doing two appearances today, and we caught her first one. She was there with her husband, Michael, who served as the perfect partner for her banter, and also as a waiter once the food started coming. She had someone else actually making the food (her recipes), so she could continue talking to the crowd. She opened her segment by taking Q&A from the audience for about 15-20 minutes, answering everything from “What was the song the woman sang at your wedding?” (Answer: “Here”) to “Where are Jamie and Bobby (her sons)?” (Answer: “Working back at the restaurant in Savannah.”) It was quite the tell-all in terms of news. She filled the audience in on some of the back-room secrets of her show. First off, if you’ve seen the show, you know she cooks in a gorgeous kitchen of a sprawling, beautiful yellow house. Turns out, the house isn’t hers, but that of her producer, Gordon Elliot, in Millville, NY. Yup, that’s the second juicy tidbit. The show isn’t filmed in Savannah, but rather the country area of upstate New York. And the dogs on the show? Nope, not hers either. And after she revealed all that (which she thought the audience already knew), she jokingly asked for the protection of the police officer that was standing by. She talked about how she and Michael met, and what everyone in her family was up to. She mentioned her cooking classes … once a month at the restaurant, for about 50 people. I would SO do a quick trip to Georgia to go — what fun that would be! Her personality in person is the same as you see on her show … that charming Southern drawl, a girlish giggle and the unassuming attitude that she really IS your girlfriend next door. She said that’s one of the reasons she thinks her show and cookbooks are as successful as they are … because everyone can easily relate to her, and attain what she has. She said her favorite food is butter and she doesn’t cook anything she can’t pronounce.

Once she was done with Q&A, she showed the audience how to make her Overnight Praline French Toast (that’s the one my sister made for the brunch a few weeks ago) and Eggs Benedict. The Eggs Benedict are done on a fried green tomato, instead of an English Muffin and the recipe is not online at FoodTV or in any of her cookbooks. Tomorrow, you can find it at www.gourmetfoodshows.com. After cooking, she directed her husband, Michael, to portion out the food and serve it to the audience. She answered more questions for awhile longer and told the story of how she got started (took $200 and started a catering business on her own), and literally had to be dragged away by her assistant (see picture below) and her agent to sign autographs and pose for pictures. She seemed genuinely touched by the audience’s presence and adulation of her, and that was really heartwarming. 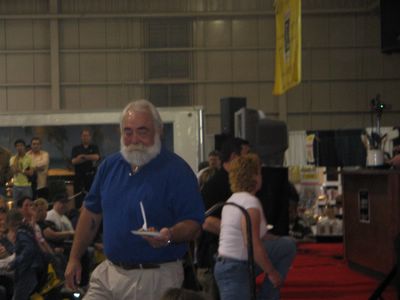 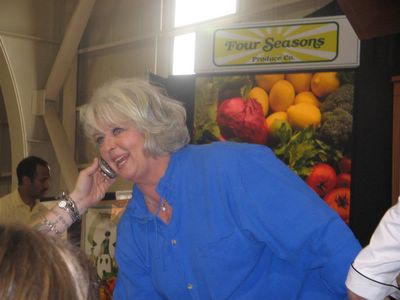 Paula chats with a fan on the phone 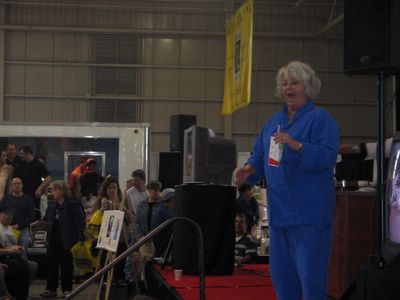 Paula chatting with the audience 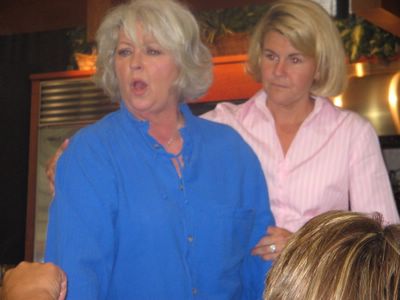 Paula and Theresa, her personal assistant

The rest of the show was great as well, with purchases around every corner. A HUGE bag of Ghiradelli chocolate chips for a mere $5! My second favorite find was a booth from Doughmakers. They’re the ones that invented the cookie sheets that have a pebble-like surface. Invented by two Moms, the raised surface is supposed to let air go through the cookies easier, preventing browning and making a more evenly baked cookie. I’ve seen these mentioned in various magazines before over the past year or so, but have yet to find a retail source to purchase them … until today! Very cool.

And lastly, my absolute favorite find – a new bookstore! One of the booths was from a local bookstore that I didn’t even know existed. All the cookbooks in their booth today were $3.99/each! I scooped up 8 books, and you can tune in tomorrow for the down-low on what I got.

Until then… happy cooking!