OK, finally got my computer back and it seems to be operational, albeit even a little faster, so I’m going to catch up a bit on some photos from the past week.

Here’s Nicholas and his girlfriend on Sunday, feeding sheep at the farm: 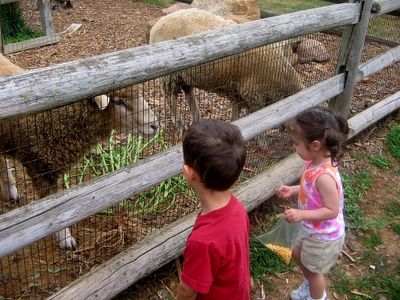 Here’s the HOMEMADE macaroni and cheese that I made for Nicholas that he refuses to eat … not even one stinkin’ taste! 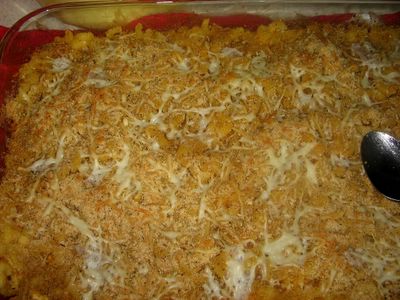 The Coconut Shrimp Ceviche I made the other night, from a recent Tyler Florence Food 911 episode: 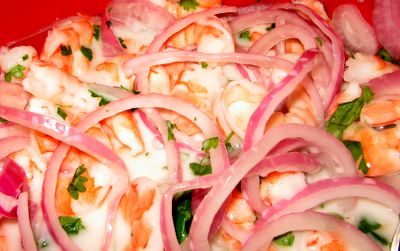 Here’s the Teddy Bear and the Elmo Nicholas made earlier in the week at Build-a-Bear store: 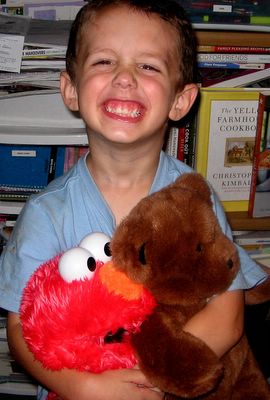 Nicholas’ nails from the “Beauty Day” at school yesterday. Hard to tell from the picture, but each nail has a small blue and white circle on it. 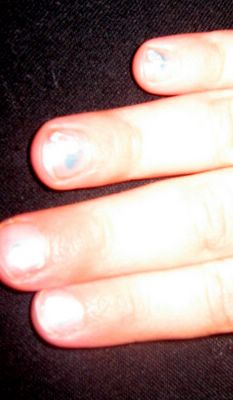 Today we ended up getting take-out and taking care of things around the house. It’s so hot outside, neither of us felt like going out. Nicholas was at my parents’ house for dinner, so it gave us a chance to catch up on a few things. We have officially had the worst take-out dinner ever, so far. And I guess, by tonight’s standards, if this is as bad as it ever gets, then we’re doing OK. Getting food like this just makes me want to open up my restaurant NOW.

You know how restaurants always make perfect looking wraps? So perfect that you wish you could replicate it at home? Not this restaurant. I couldn’t decide what I wanted, and finally settled on the Bleu Cheese Chicken Wrap. First, there was not one speck of bleu cheese in this wrap, nor one iota of bleu cheese dressing. Secondly, you could not pick this dang thing up. It fell apart as soon as you did. And lastly, it was so fiery hot that I couldn’t eat it, and The Husband ended up giving me half of his Chicken Parm sub as a trade. 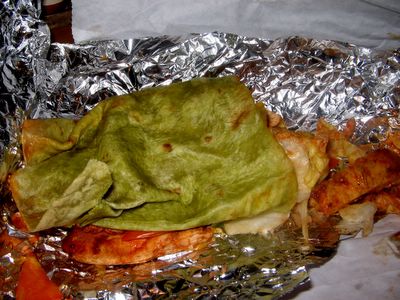 Next we have bruschetta. The bruschetta I am familiar with is usually a slice of toasted bread topped with chopped tomatoes, a little diced onion, some basil and olive oil … no? This was a slice of bread (not toasted), topped with balsamic dressing, BIG pieces of tomato, slices of red onion and white onion, big slab of melted mozzarella cheese and finished with tortilla strips that were doused with more balsamic dressing. Now please enlighten me … what bruschetta is topped with tortilla strips? Maybe one at a Mexican restaurant … though not a Mexican food, I could understand the tortilla strips there. But at an Italian restaurant? The concoction was edible, though I wouldn’t order it again. It’s just not bruschetta. 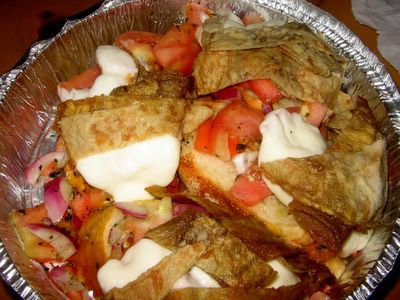 And lastly, the Cannolis. I love cannolis. I have found the best ones in town, and they come from another Italian place (no delivery). These arrive and they seem to have missed the point of the ricotta filling. It’s called filling because it FILLS the cannoli shell. See anything wrong with this picture? It’s all over the bottom of the pan, and the shells are mostly empty. Now lest you think this is a “but it’s 90 degrees outside, it must’ve melted problem” — not so. I’ve had them once before in the Winter, same end result. Then, I chalked it up to it being a new restaurant, and a very young, inexperienced waitress. 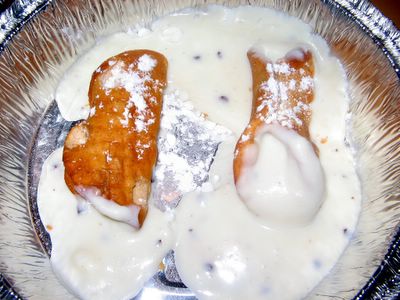 Another long week is finally over. Not sure what’s on tap for the weekend yet … getting a pair of glasses (I know, we live on the edge of excitement, right?). The exciting part is it’s a mystery shop, so someone else picks up the tab. Since I only wear glasses at night, I hate spending the $$ on them myself. This works out nicely. A favorite reggae band of Nicholas’ (Verdict) is playing at IKEA on Saturday afternoon, so we might head out for that. After that, this weekend is anybody’s guess, so tune in to see what develops. Until then…