So we have a new tradition with The Neighbors – Friday Night Date Night. Nicholas and The Girlfriend get together and have dinner and playtime at one of our two houses, and we alternate houses that we the adults get date night too. Works out well for all! Tonight the kids were here and The Neighbors escaped for an “adult” dinner. Not only did The Neighbors escape, but so did The Husband; some of his current employees took him out for a “good bye” dinner. Sounds like I got the short end of the stick, huh? Actually we had a blast here, with me being the third wheel on Nicholas and The Girlfriend’s date. They had homemade pizza, grapes, cheese sticks, the leftover Potato Salad with Pickled Cucumbers from Supper Club last night and apple juice. I was surprised both of them gobbled up the potato salad – veggies in their little bodies! Yay! Quite the feast. They ate really well, scoffing down the food, and had a second feasting with a picnic under the table a few hours later. 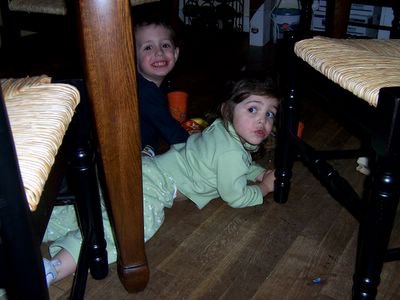 Our cat, Luke, even joined them to find out what all the excitement was about: 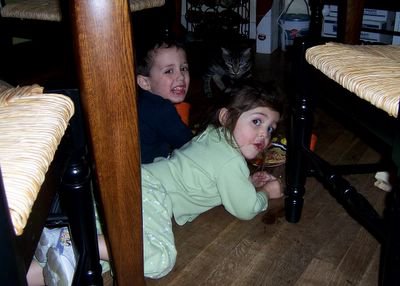 By the end of the night, Nicholas was calling The Girlfriend with his last name, and if you ask her what her name is, she now responds with her first name and his last name. I swear I was only in the kitchen for a few minutes … no rush-trips to Vegas! But it certainly sounds like things are getting serious between these two. By the end of the night, when Nicholas called her, she was answering him, “Yes, dear!”

I had Supper Club leftovers for dinner tonight (and they still taste just as great as they did last night), and also made a new recipe for dessert, Truffle Brownies. I doubled the batch and sent The Neighbors home with dessert. I’d make it again, but the freezer time needs to be a little longer than the hour suggested, because otherwise they don’t cut cleanly.

With us going away this weekend, Stephanie from Dispensing Happiness has graciously agreed to host Weekend Dog Blogging #9 for me, so if you have a pup picture to show off, go on and visit her web site and either leave it in the comment section or send her an e-mail. I’ll forward Stephanie any e-mails I get in the interim. Weekend Dog Blogging #10 will be back here the next weekend as usual.

And speaking of guest hosting, Clare of Eat Stuff is still in the hospital, so Farmgirl Fare is taking over Weekend Cat Blogging duties this weekend, putting together a special “get well” edition for Clare and Kiri, so be sure to hop on over there and join in the fun (see specific post here).

All for now. Tune in tomorrow to see what the weekend brings. Until then…

Preheat oven to 350 degrees F. Using a hand held electric mixer, beat the eggs and salt together in a large mixing bowl until frothy. Add the sugar and beat until the eggs are thick and pale yellow, about 2 to 3 minutes. Add the vanilla extract and beat an additional 30 seconds.

Put the margarine and chocolate in a microwave safe container and microwave on high for 1 minute. Stir to insure that the chocolate has melted. Microwave an additional 30 seconds, if needed.

With the mixer running, pour the melted chocolate into the egg mixture. Add the flour and beat 1 minute. Scrape down the sides of the bowl and beat an additional 30 seconds.

Spray the cake pan with a pan release spray and pour in the brownie batter. Place the pan on the top rack of the oven and bake 15 to 20 minutes until the center is barely set.* Remove the pan from the oven and let cool. Top with the ganache and place in the freezer for at least 1 hour.

To serve, remove from freezer and slice immediately. Allow to come to room temperature before serving.

Put the chocolate chips and cream into a microwave safe bowl. Microwave on high for 1 minute. Remove the bowl and stir with a whisk or fork until well mixed. Use immediately. If using the ganache later it will need to be reheated.