A busy day, but we managed to get a lot of errands done, including picking up our Christmas tree. The stores are already starting to get crazy busy, so I’m going to try and finish up my Christmas shopping this week to avoid the worsening onslaught. I’ve been doing a lot of it online, and that definitely helps. ‘Course the UPS man might expect a nice tip, but it’s worth it to stay out of the stores.

This weekend, our regular events are a little out of whack. Our Friday Night Date Night last night will happen next week instead, and because we’re going to my Sister and Brother-in-Law’s for dinner at lunch tomorrow, we had The Neighbors Dine Over Sunday tonight. I decided to make a Cuban-themed meal, well mostly.

We started out with homemade guacamole that Nicholas and Danielle (my stepdaughter) made all by themselves. I added a veggie packed salsa and we filled the tray with chips. The guacamole was completely obliterated by the end of the night. The salsa was real easy to make. I just made a simple fresh salsa and added in nearly a can of rinsed black beans, and almost a full can of corn. With the blue and corn chips, I added Terra’s root vegetable chips. Nicholas ate a bunch of the salsa and the veggie chips, so the Sneaky Mom strikes again – Score! 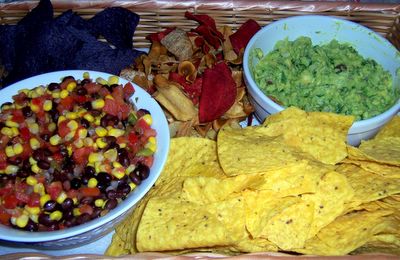 For the main course, I made two new recipes, Rachael Ray’s Cuban Spiced Pork Tenderloin and Soffrito Rice. Very simple to make, I actually came pretty close to getting it done within the 30 minutes she does — not bad considering I had kids running around the kitchen “helping.” The pork was tender and very flavorful, and the rice was delicious. I’d definitely make both again. 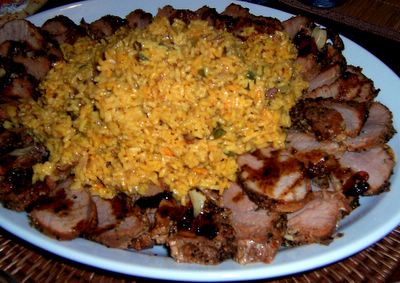 The Husband had bought a package of Smoked Salmon last weekend and was moving pretty slowly on finishing it off. I decided to help him out by making another new recipe to include with dinner, again from Rachael Ray, her Smoked Salmon Pizza. I think that was a sneak hit of the night. I’m not a big fan of salmon, and only eat it one way … in a creamy risotto-type rice dish my Mom makes with salmon. I’m a big believer in trying everything once. If you don’t like it, that’s fine. You just have to try it. So I tried the pizza … and whaddya know? I liked it! And the same went for The Neighbor and Danielle; neither of them being big salmon fans either, they both tried it and liked it. We ended up with only one tiny piece of the pizza left, so you can bet THAT one will be repeated as well, and using Boboli crust, it was a cinch to make. 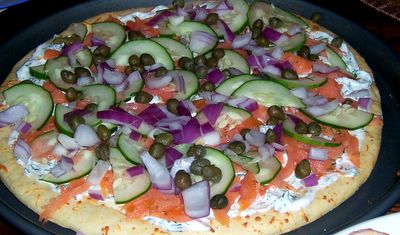 So tomorrow the Sister is cooking. She doesn’t like to reveal her menu before we come … she’s crazy like that, and I asked if I could bring anything and she said no. Well, of course, I’m going to bring something anyway, so I made 3 different desserts and will bring a small platter assortment of them, and the rest go into The Neighbor’s office and mine on Monday, along with one or two additional items, depending on my time tomorrow. One of the 3 desserts I made is a new recipe, so that’s FOUR, count ’em, FOUR new recipes for today. I must be picking up slack for my low “new recipe count” for November. ;) Anyways, she’s not revealing the menu, so I’m not revealing the desserts … you’ll have to tune in tomorrow to see what I made, but I can tell you one thing … the new recipe is another winner. So 4 new recipes today, 4 will be repeated, and Nicholas ate veggies. Sounds like a good day to me!

Tune in tomorrow to find out what hits The Sister’s Table, what goodies I made, to check out the pups for Weekend Dog Blogging #12 and to see what’s scheduled for this week. I can tell you one thing … it’s going to be BUSY.

P.S. I received an awesome “fan letter” today … thanks, you made my day!

Smoked Salmon Pizza
This makes a wonderful 10 minutes or less party offering or appetizer, as well as a light entree on summer nights. Compliment it with a simple mixed green salad for supper.

Preheat oven to 400. Crisp pizza crust 5 minutes on perforated pizza pan or on oven rack. While pizza crust is in oven, mix sour cream with lemon juice and dill in a small bowl. Remove pizza shell from oven and let stand until cool to the touch. On cool, crisp pizza shell, spread the sour cream-dill sauce in an even layer. Evenly distribute sliced smoked salmon, working all the way to the edges. Top pizza with sliced cucumber, red onion, and capers. To serve, cut pizza in 1/2. Cut each 1/2 in 1/2 again, 4 cuts across. Turn the pan a 1/4 turn and slice into quarters, making 16 cuts.

Preheat the oven to 450F. Heat medium pot with tight fitting lid over medium high heat. Add oil and bacon and brown bacon. Add onions and peppers and saute 5 minutes. Add broth and bring to a boil. Add rice. Cover the pot and reduce heat to simmer. Cook 15 to 18 minutes, until rice is tender.

For pork, cut 4 slits into each loin and nest garlic and bay into meat. Place meat on nonstick baking sheet. Combine the spices. Coat meat with oil. Rub spices over the pork tenderloins and place in oven. Roast meat 25 minutes. Remove from oven. Let juices redistribute, then slice and serve with soffrito rice and garnishes of chopped tropical fruit or chopped cilantro and scallions.