So the holidays are over and it’s back to work tomorrow. I don’t know about you, but I’m tired … I could use the break of work. ;) I did manage to get caught up on a lot of movies this weekend though, watching Surviving Christmas

, Christmas with the Kranks

. Not bad, eh? I had higher hopes for Stealth, and actually turned it off after 45 minutes. I figure if it hadn’t hooked me by then, hopes were pretty slim it would. Can’t all be winners…

Today I braved two stores for the after-Christmas madness, and managed to get a few deals, including my holiday cards for next year. Once I saw the craziness at the mall, I knew there was no way I was setting foot anywhere near there, and instead made a quick break for Target.

The Neighbors came over for dinner tonight, and since our refrigerator was already burgeoning with leftovers, I kept it simple. I made an Antipasto Platter, a Spinach Salad, and then we had Baked Spiced Shrimp with hot, crusty French bread. The Sister-in-Law was in Mystic, CT recently, and the shrimp recipe comes from a cookbook she brought me back from there. Not light by any stretch of the imagination, it was very yummy. With a cup of butter, how can it not be? The leftovers are going to make a simple Shrimp Scampi over Spaghetti for tomorrow night’s dinner. 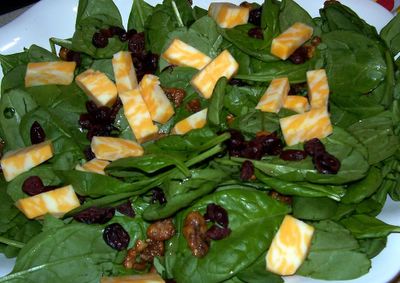 For the salad, I used spinach leaves and tossed it with dried cranberries, candied walnuts and chunks of cheese. The dressing was a mixture of maple syrup, olive oil, a few dashes of balsamic vinegar, salt and pepper. Full of veggies and good stuff, it was a perfect, quick-to-throw-together salad.

Growing up, we spent a few years living in England, and my mom quickly took to the tradition of English Crackers. It’s a neat little Christmas tradition over there. A cracker is a tube-shaped thing, brightly wrapped up. If you pull it at both ends, it makes a loud POP, like a small firecracker. Once opened, there’s a festive paper hat, a small toy and a joke inside. It’s a fun Brit tradition, and one that we’ve restarted in the last few years. While we were in England, my Mom even started making them herself. Tonight, we introduced the Neighbors to English Crackers and Nicholas and The Girlfriend had fun popping them open. 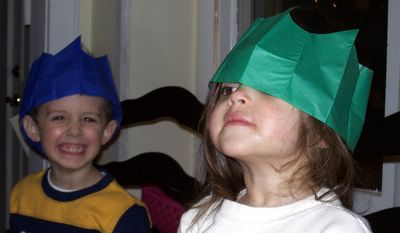 Enjoying the Spoils of English Crackers

Here’s Nicholas, passed out after yesterday’s Christmas festivities. Poor baby is sick now … took him to the doctor today and he has croup. He’s been pretty miserable all day today, except for when The Girlfriend came over, putting on a brave face then. It’s definitely no fun to be sick on Christmas when you’re a kid. Luckily his doctor opened the office just to see him and get him on some medication, so hopefully he’ll start feeling better tomorrow. 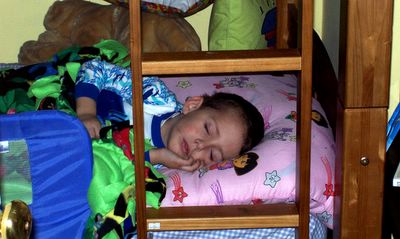 And speaking of Christmas … Santa was very good to me this year, bringing me all sorts of fun goodies for my kitchen. My Sister-in-Law gave me the Mystic cookbook and a Cuban cookbook, which I’m looking forward to delving into. Kitchen-oriented, The Husband got me five cookbooks and, amazingly enough, only one of them is a duplicate! My sister got me a great assortment of cheeses for popcorn (Nicholas and The Husband LOVE an after-dinner bowl of popcorn!) and cookbooks, and my parents got me a bunch of dishes and platters in our new colors, silicone baking pans, tons of napkin rings and more. I’m still trying to find space for everything!

OK folks, all for tonight. Tune in tomorrow, as I reveal the newest weekly event at Sweetnicks … ARF Day Tuesday! It’s something all of you can participate in, and I hope you will. Until then…