So after yesterday’s post, I got an anonymous question from a Brit, asking who IS this Rachael Ray person? I would have thought by now, she would have reached some popularity over in the UK, like Jamie Oliver,

have here, but maybe she hasn’t made it across the ocean yet. In that case, here’s the skinny.

Rachael Ray was literally born into cooking, growing up at her mother’s apronstrings at a restaurant her family owned in Cape Cod, Massachusetts. When Rachael’s family moved to NY, her mom continued working in the food industry as a supervisor for a chain of upstate restaurants.

Rachael started her own career in the food industry by working at the candy counter of Macy’s in New York City, and then later moving on to be the manager of the fresh foods department. After that, she helped to open Agata & Valentina, a gourmet marketplace, where she was the store manager and buyer. She then decided to leave the hustle and bustle of the city life and return to the slower, calmer pace of the Adirondack mountains.

Once there, Rachael managed various pubs and restaurants at Lake George resort and was then recruited by Cowan & Lobel, a large market in Albany, to be their food buyer. She also added chef duties to her job while there, and as a way to increase the store’s grocery sales during the holidays, Rachael began a series of cooking classes. And that’s when it really all came together.

Rachael’s “30 Minute Meals” classes became so popular that the local media covered them for a segment, and the following week, a NY TV station asked her to do a weekly “30 Minute Meals” piece for their evening news. Nominated for two Emmys, the show was a major success: her companion cookbook sold 10,000 copies locally and her success grew from there, spawning now a total of 4 different shows on FoodTV Network, second only to Emeril, and she has a whopping fourteen cookbooks

to her credit. In October of this year, Harpo Productions (you know, Oprah’s company), tapped Rachael to host a new daily one-hour talk show to start in the Fall of 2006. And oh yeah, there’s this new magazine that Rachael started publishing last month. And if that isn’t enough, she got married this past September in Italy. Let’s face it, she’s doing good. Those in the food business scoff at her and say she’s not a chef, and she’s quick to agree. She has had no formal training and considers herself just an average homecook. And, rightly so, I think that’s where her appeal lies. She’s teaching people how to get a healthy, hot dinner on the table with ingredients they very often have in their own pantry. That works for me, and there you have it … that’s who Rachael Ray is. :)

Friday Night Date Night was at our house tonight, and The Neighbors got a chance for a quiet dinner out. I took the opportunity to run to the bookstore to relax for a bit, still recovering from a long week of being really sick. And it proved to be perfect timing for a trip to the bookstore … the imports are here! My favorite time of the month. ;) Can’t wait to start delving into these… 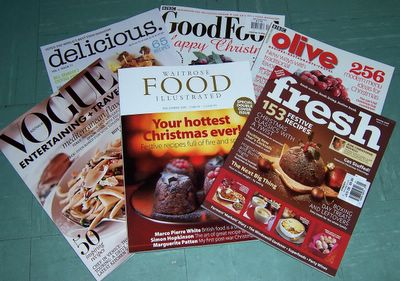 Nicholas and The Girlfriend had their Christmas party at school this week. Since I haven’t been feeling well, I didn’t go, but did send The Husband and the camera. Needless to say, I don’t think Nicholas was too thrilled wearing his reindeer antlers and nose, but he and The Girlfriend DID manage to share a few tender moments together before singing for the crowd. 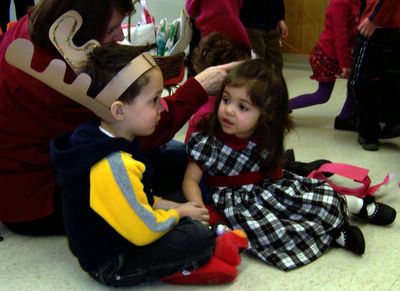 No dinner report tonight. The Husband was on his own with the two kids, and they got dinner from “the chicken and rice man” (aka Chinese take-out), and I grabbed a Grilled Asiago Pretzel and Mocha Frappuccino from the bookstore. Yum!

For those of you that still need a few last minute holiday gifts for the foodies on your list, Fine Cooking magazine has just published their list of six “must-have” food-related books. Believe it or not, in my burgeoning cooking library, I don’t have any of these, although I know Santa is bringing me one of them. ;) You still have a few more shopping days to get these in time, if one (or two! or three!) catches your fancy, and after visiting the mall tonight, I can’t say I’m planning to go back there between now and Christmas!

by Nick Mautone. With us doing a new cocktail every weekend for The Neighbors Dine Over Sunday, this one is tempting.

by Peggy Knickerbocker. I love entertaining at home, and this book looks like it might need a place on my bookshelf. It has over 100 recipes from the author and is organized by seasonal, and most importantly, accessible menus and spans the realm from a cozy dinner for two to an all-out feast.

by Max McCalman and David Gibbons. It’s a guidebook to over 200 of the very best cheeses available in the world. Each individual cheese is shown with a color picture, practical information on buying, storing and serving it, and even wine-pairing tips.

– this one was definitely on my list. It’s the most popular cookbook in Italy, and this is the first time it has been translated and available in the US. I’ve seen it at the bookstore, and the thing is H-U-G-E! Over 2,000 recipes and 200 color pictures, I think it’s a must-have for Italian food lovers.

by Jill Norman. Full of 1,800 color photos and 650 recipes, it’s “the technical reference book we’ve all been waiting for.”

by the husband and wife team of Jeffrey Alford and Naomi Duguid, this is their fifth book and “brings to life their delicious journey through Indian, Pakistan, Bangladesh, Nepal and Sri Lanka.” I gotta say, just the cover picture alone is enough to make me want it.

Just a few notes before I leave you:

1. For those participating in Weekend Dog Blogging #14 this weekend, don’t forget, your picture this weekend MUST include food (and no, dog food doesn’t count). The best picture gets a brand spankin’ new cookbook, so that should be a little motivation for you.

2. Polls close at midnight tonight for voting in the 2005 Food Blog Awards, so if you haven’t voted for Sweetnicks yet, hop to it – time’s a-wasting! You can even do it anonymously. Show Sweetnicks some love.

3. Don’t forget Weekend Cat Blogging is taking place with an ongoing round-up all weekend; Weekend Herb Blogging is the chance to show off your green thumb, love of herbs and ways you use them; and lastly, the newest regular weekend event, Weekend Indian Kitchen hosted by Mahanandi. Every Monday, she’ll post the round-up of pictures from bloggers’ showing their Indian kitchen ingredient/utensil, tool or recipe. The item could be unique, common or anything in-between. So whatever your passion, there’s a place to show it off.

P.S. I know I promised you Rachael Ray’s Top 10 Gift Ideas for the foodie on your list, but this post is getting long (hope you’re still with me!) and I’m getting tuckered, so tune in tomorrow for that. :)