Before I get to this week’s nod for New (to Me) Blogger on the Block Thursdays, first a dinner report.

As I mentioned yesterday, I’m adding a new, regular segment to my Thursday posts, Rediscovering My Library. Tonight, I broke out Food & Wine’s FAST: Over 150 Quick, Delicious Recipes in 30 Minutes or Less. I bought this one over the summer and haven’t used it yet. From it, tonight I made Quick Thai Beef Salad and served it with Miss Leslie’s Ham Salad with Biscuits, which I’ve made before. I first made the Ham Salad about a year-and-a-half ago for one of our Supper Club gatherings, and then last month, for the Summer in December theme, one of the Supper Club members resurrected it. It’s originally a Rachael Ray recipe … delicious and simple to make.

The Quick Thai Beef Salad was good. With it having fish sauce in it, it is probably going to be an acquired taste for some, as that tends to be a very strong flavor, but again, very simple to make. Dinner was on the table in about 20 minutes and full of veggies: cucumbers, celery, and tomatoes. Not bad, and not even ARF/5-a-Day yet! One caveat for those trying this recipe. It ended up having a LOT of extra sauce, so I’d halve those ingredients next go ’round. I made some modifications to the recipe, as I’m wont to do, and the recipe below includes those changes. 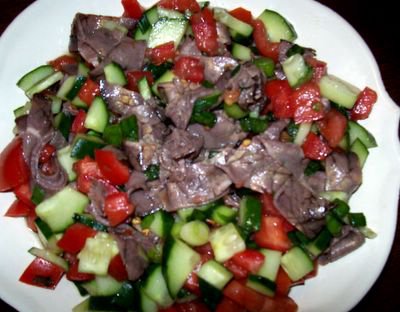 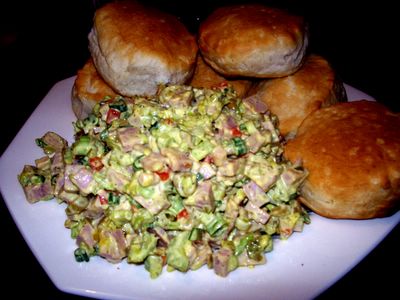 After dinner, Nicholas and I made a quick treat to bring into the office tomorrow, Pear Custard Bars. Another new recipe, they certainly look and smell good. We’ll have to wait for a taste test until tomorrow as they have to be in the fridge for 2 hours. 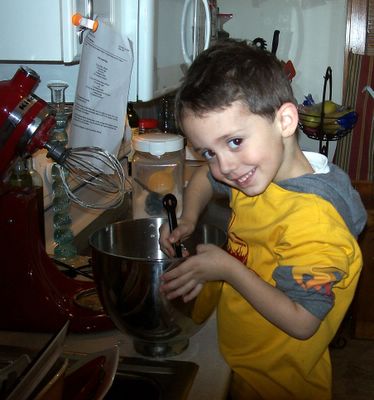 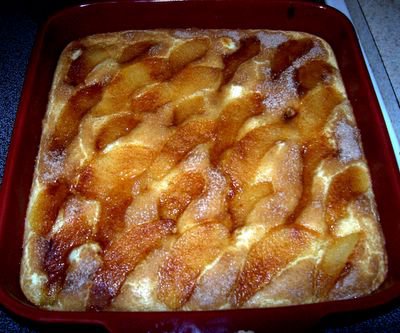 This week’s nod for New (to Me) Blogger on the Block Thursdays goes to Just Braise, a blogger I “discovered” last week. I think, so far, she is the closest (geographically speaking) blogger for my regular Thursday feature — always nice to “meet” a local. :) I was drawn into her site immediately by her banner: warm, inviting and captivating all at the same time. Check out her Gourmand Cheeseburger, loaded with goat cheese, garlic and wine, it sounds like a great combination and we love our goat cheese here. She waxes rhapsodic about tuna fish sandwiches, allowing you a peek into her childhood, and I know Clare will appreciate the kitty picture in that post — love the little white feet propped up! Hopefully Stacey will start participating in Weekend Cat Blogging over on Clare’s site. I haven’t seen a mention of a dog yet, but if there’s one over there, we’ll have to drag her into Weekend Dog Blogging. I also just printed her recipe for White Bean Bruschetta (scroll down on that post for the recipe) and think it might make an appearance either for New Years’ Eve pre-dinner munchies or for our next Supper Club event. I love the stories she tells … enough about my favorite posts of hers — go off and find your own. ;)

All for tonight. Tune in to find out what hits the table for the kids’ Friday Night Date Night and what’s on tap for the weekend and New Years’ festivities. Until then…

P.S. And in the “hey, at least she’s trying category,” The Neighbor calls me tonight and wants to know what The Husband (since he’s a volunteer firefighter) thinks about using a microwave after a small fire. Is it safe? And, oh yeah, there’s a bit of peeling paint inside it now… is that ok? OK, in her defense, at least she’s TRYING to cook. She usually uses her microwave and stove for storage (yes, you read right) and apparently when she emptied it out to use it, she missed something in the back, went to nuke something, and the microwave promptly caught fire. Sigh. Good News: No one was hurt in the dinner making effort, ‘cept, of course, the microwave. Bad News: We might have scared The Neighbor from ever cooking again. Better News: We’re just a stone’s throw away, and there’s always plenty of good eats here. Kudos to her for trying though. Gotta give her some props for that.