… and he did! ‘Course I helped a bit by picking out three recipes, but I had a craving for salad (sometimes your body just knows what it needs), and wanted to make sure it made it on the menu. Three new recipes tonight, and it looks like 3 repeaters. No WOWs, but good, easy food to throw together for a quick weeknight meal. I think The Husband probably felt the salad was a WOW, particularly after his third helping. I helped in the kitchen just a little bit … had to get off the bed – never been too good at this “relaxing” thing. But as soon as I finish here, I’m back to bed. A very healthy dinner tonight and the Sneaky Mom strikes again. Nicholas had a little bit of everything … and a LOT of the salad and Bean Empanadas.

We had Columbia’s Original “1905” Salad, Tomato and Mozzarella Quesadillas with Basil and lastly, Bean Empanadas. All were very simple to make and were on the table in 30 minutes — take that, Rachael Ray! The Columbia’s Original “1905” Salad was actually from Rachael Ray’s new magazine and has an interesting story behind it (see below). Tune in tomorrow for my thoughts on Rachael Ray’s magazine – I finally got a chance to read it and ripped out a bunch of recipes. In the meantime, I’ll leave you with the recipes, a few pictures and something to chew on.

In an e-mail from Hungry-Girl today, she answered some questions about The Cheesecake Factory’s food. Yikes! Did you know their carrot cake has a whopping 1,560 calories and 84g of fat, and 1080 cal, 71g fat, and 100 carbs for a slice of their Chocolate Chip Cookie Dough Cheesecake. Even their Chinese Chicken Salad (which I love!) clocks in at about 1,600 whopping calories. Well, today is National Bouillabaisse Day. With the average bouillabaisse, or fish stew, containing about 400 calories and 10-15g of fat per serving, you might be better off with a bowl of that. Not that we’re going to be cutting out our infrequent visits to The Cheesecake Factory, but it’s good to know before you go. :)

P.S. Thanks for all your well wishes!!

Columbia Restaurant’s Original “1905” Salad
Courtesy Columbia Restaurant From Every Day with Rachael Ray
November-December 2005 issue
Four Servings
Columbia Restaurant in the Tampa area’s historic Ybor City no doubt qualifies as mass production: 1,700 seats in 15 dining rooms that together span a full city block, making it the biggest Spanish restaurant in the world–including, you know, Spain. At least 1,000 people show up daily, and on weekends the place is bursting. The “1905” salad is a citywide obsession.

In a large bowl, toss together the lettuce, tomatoes, Swiss cheese, ham and olives. In a small bowl, whisk together the garlic, oregano and Worcestershire sauce. Gradually whisk in the olive oil, continually beating to form an emulsion. Stir in the vinegar and lemon juice and season with salt and pepper. Pour the dressing over the salad and toss well. Add the pecorino, toss and serve.

Tomato and Mozzarella Quesadillas with Basil
Sweetnicks Notes: Instead of grilling these, I put them in a frying pan with a little olive oil and cooked both sides until golden brown. They could also be baked on a greased baking sheet as well. Also, I excluded the pine nuts and just put the basil inside the quesadillas. Nicholas ate half a quesadilla by himself. Yummy stuff.
8 8-inch flour tortillas
12 ounces grated or sliced mozzarella
2 tomatoes, cut into 1/4-inch-thick slices
1/2 teaspoon plus 1/8 teaspoon kosher salt
1/2 teaspoon freshly ground black pepper
1 bunch fresh basil, leaves picked
1/4 cup pine nuts, toasted
4 teaspoons extra-virgin olive oil

Heat grill to medium. Arrange 4 of the tortillas on a cutting board. Arrange the mozzarella and tomatoes on the tortillas, leaving a 1-inch border empty. Season with 1/2 teaspoon of the salt and the pepper and top with the remaining tortillas. In a medium bowl, combine the basil, pine nuts, oil, and the remaining salt; set aside. Cook the quesadillas around the perimeter of the grill until the cheese melts and the tortillas are crisp and golden, about 2 minutes per side. Immediately cut the quesadillas into wedges and serve with the basil salad.
Yield: Makes 4 servings
Real Simple, SEPTEMBER 2005

Heat oven to 400°F. Spread 1 teaspoon of the oil on a baking sheet. Cut each piecrust into 3 equal portions. On each cut piece, spread some of the beans, then top with 1 1/2 tablespoons of the salsa and 2 tablespoons of the cheese. Fold over the other half of each piecrust piece, covering the filling, and press the curved edge with your thumb to seal. Lightly brush the tops of the empanadas with the remaining oil, then transfer to the baking sheet. Bake for 12 to 15 minutes or until golden. Serve with a dollop of sour cream, if desired.
Yield: Makes 6 servings
Real Simple, SEPTEMBER 2005 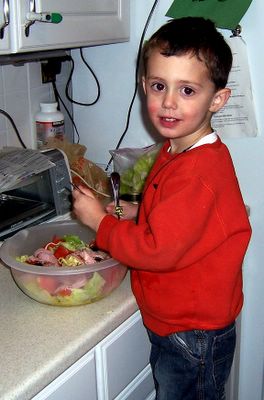 Nicholas Mixing the Salad, a New Favorite of His 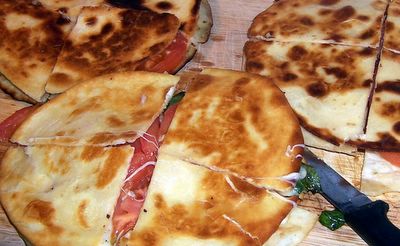 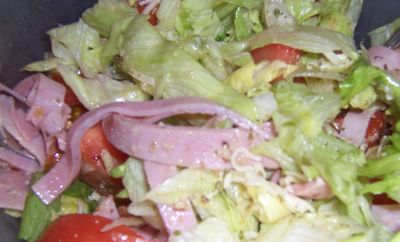 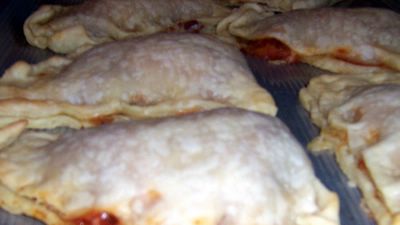