Otherwise known as The Husband Cooks Wednesdays, but he’s out of town on business, so no cooking from him today (it’s convenient that his one cooking day a week happens to fall on a business travel day, eh?).

Anyways, back to the “Well, I’ll Be Darned!” reference… Nicholas, who has a serious disdain for tomatoes (except in the form of ketchup and pizza, of course), ate a whole bowlful of Homemade Tomato Soup tonight … and kept coming back for more! This coming from the kid who won’t touch any homemade macaroni and cheese I make for him, and I’ve tried several different recipes. He is just a “blue box” type of fella.

I asked him what he wanted for dinner tonight, since we were on our own, and he responded with “chicken nuggets!” Fair enough, I can handle that. The Husband is not a big tomato soup fan, though he’ll eat it, so I figured this was as good an opportunity as any to try out a new recipe. It was a pretty simple one, and quite tasty, with the surprising addition of balsamic vinegar giving a little bit of an added flavor level. While I was working on it, Nicholas went to work making his own “soup,” and I use the word “soup” very loosely. He was very serious about what ingredients he wanted, and while it was certainly a liquid recipe, it was not exactly edible. He started with a little bit of sugar, salt (specifically requesting the one from the salt mill, as opposed to plain old table salt) and ground pepper. Then he added a few handfuls of white chocolate chips, chicken broth, water and a splash of balsamic vinegar. He certainly gets an A for effort. He put some on a spoon and asked me to try it. I pretended, and, of course, that didn’t fly. He said, “No, Mama, really try it!” I begged off, saying I wanted my tomato soup instead. That wasn’t good enough either. So I said, “OK, you try it first, and then I’ll try it.” He put the spoon to his mouth and made a slurping sound, completely faking it. I told him that didn’t count and eventually he tried it. He actually had a couple spoons of it with his chicken nuggets. He calls it Chocolate Soup. Once he was done, he asked what I was having and I said, “tomato soup,” fully expecting him to say, “Yuck, I don’t like tomatoes,” which is his usual mantra whenever he sees them. But this time, he asked to try it and had a whole spoonful, and then another, and another, before bounding off to the kitchen to grab his own bowl and spoon and polished off a whole bowlful. Score 2 for Sneaky Mom!

After dinner, I set to off to tackle a few of the dishes I’m bringing to Supper Club. All the things I’m bringing are new recipes, and I’ve got two done already, and plan to make the other two tomorrow. Tonight I made Scarborough Fair Shortbread, a savory shortbread that smells amazing, and a Chilled Strawberry Soup, that will definitely become a frequent repeater. The Chilled Strawberry Soup is a perfect dish for our Summer in December theme, and Nicholas has already happily sampled several spooonfuls. He loves his fruit, no doubt about it; he even asked to take some to school tomorrow for his lunch, and I’m only too happy to oblige. This recipe only has THREE ingredients to it, and is simple to make … take three ingredients, mix in blender and chill. Very refreshing. Tomorrow I’m going to make Jordianian Lemonade, another good choice for our theme and then Broccoli Casserole. That should do it. Judging by some of the things others have said they’re bringing, it’s pretty fair to say we’ll have quite the feast … as usual.

That’s all for tonight, folks. Tune in tomorrow to see who’s this week’s New (to Me) Blogger on the Block and, of course, the Supper Club round-up. Until then…

P.S. And for those who read yesterday’s post and browsed the Top 10 Power Foods, Nicholas and I managed to get 2 of the 10 in today — not too shabby! 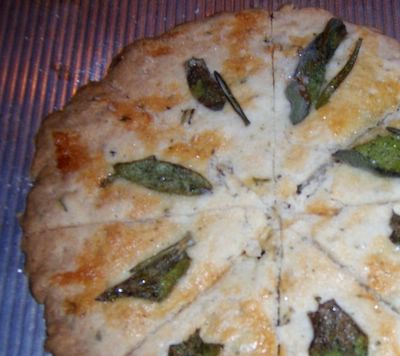 Put oven rack in middle position and preheat oven to 375°F. Stir together flour, 1/4 cup sugar, salt, and chopped herbs in a bowl, then add butter and stir with a fork until mixture forms a dough. Divide dough in half and pat each half into a 6 1/2- to 7-inch round on an ungreased baking sheet. Crimp edges of rounds and cut each into 8 wedges with a sharp knife. Lightly brush with egg white and arrange 1 leaf of each herb on each wedge. Brush herbs lightly with egg white and sprinkle with remaining 1/2 tablespoon sugar. Prick each wedge once with a fork.

Bake until golden, 15 to 17 minutes. Recut wedges while shortbread is hot, then cool completely on sheet on a rack.

Note:
Shortbread keeps in an airtight container up to 5 days.