Tonight’s nod for New (to Me) Blogger on the Block Thursday goes to Nathalie Bouffe (formerly Cabbages and Kings), a blog written by Nathalie from the UK. Gorgeous pictures, purely unadulterated honesty in her posts and a sense of humor to boot. Hey, anyone who lists her mix of favorite foods as New Rivers lemon tarts, Beaufort cheese, lavender salad dressing, Berkswell cheese, quince paste and creamed leeks right along with Oreos, Easy Mac, and Krispy Kreme donuts is definitely one to watch. Check out her site when you get a chance.

My plans for dinner changed a thousand times tonight, if they changed once. Knowing it was time for my Thursday Rediscovering My Library segment, this morning before leaving for the office, I closed my eyes and picked a random cookbook off the shelf. It ended up being Rachael Ray’s 30 Minute Meals 2

. I actually planned the entire meal for tonight from the cookbook, but then The Husband ended up going out to dinner with my stepdaughter, so it seemed a little too much for just me and Nicholas. And since he was just requesting white rice with butter, my plans were quickly going by the wayside.

I ended up making her recipe for Roquefort, Pear and Walnut Toasts, which were delicious and very simple to make. Even better, I had leftover pears and sourdough bread from this weekend, so I only needed to buy the roquefort cheese. I had to keep grabbing the container from Nicholas, since he kept swiping it and was eating it by the handful. The other two recipes that I was planning on making tonight will become tomorrow night’s dinner, and I even have the groceries already, so I’m ahead of the game. 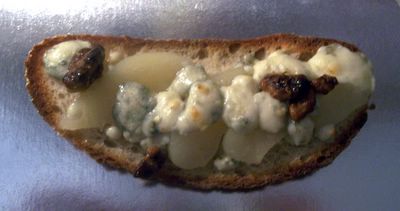 All for tonight. Tune in tomorrow for the weekend kick-off. Until then…

P.S. One last thing … rumor has it, The Neighbor Husband might be making his very first comment on my site tomorrow (after, of course, you know, the endless comments I get in person … ;)). Anyways, I need your help with something. He thinks Sandra Lee is right up there with the “great chefs.” Although I am the first to admit that a) I have some of Sandra Lee’s cookbooks and b) everyone cooks at different levels, can y’all please tell The Neighbor Husband that we, um, might want to shoot a little higher? And geesh, the matching kitchen and tablescapes drive me a little nutty… ;)

Preheat the broiler. Arrange 12 slices of baguette on the broiler pan in a single layer. Toast bread lightly on each side under broiler. Remove broiler pan from broiler. Spread out sliced pears on cutting surface and squeeze the juice of a wedge of lemon over the slices to keep them from browning. Place a slice of pear on each toast and top with Roquefort crumbles and walnut pieces. Return pan to broiler 6 inches from heat source and broil toasts 2 or 3 minutes to melt cheese and toast walnuts.