Another relaxing day today – I actually didn’t leave the house once! One of my New Years’ resolutions is to try and slow down a bit. To that end, The Husband actually resigned the Fire Department and I officially left my Supper Club today. Huge, hard decisions for both of us, but probably harder for The Husband, given that he’s been a firefighter for 10+ years now. We’ve just decided to refocus and reprioritize a bit… and I think today happened to be the kick-off of that.

And likewise, we just happened to have had one of the most relaxing The Neighbors Dine Over Sundays dinner ever. I can’t put my finger on what made tonight so right, it just was. Maybe The Neighbor can put words on it. We ate in the living room, opening up the coffee table, and sitting on the floor. A great, satisfying meal, compounded even more so by Nicholas and The Girlfriend being too busy playing upstairs to even come down to sit with us. They ran down and grabbed a bite or two here and there and finally came down to feast towards the end, but other than that, they wanted no part of us. :)

Some new recipes, and some tried-and-trues; whatever incarnation they were, they were all definitely one thing: delicious. To start with, we had Pancetta Crisps with Goat Cheese and Pear. An OMG starter, if I ever had one, and SO simple to make, it should be illegal. Slightly saltiness from the crispy pancetta, cool creaminess from the goat cheese and a touch of sweetness from the pear – perfection, and so addicting! This will definitely be a repeater in our house.

To get our greens in, I made a Greek Salad, and The Neighbor did the dressing. First time I’ve ever seen a Greek Vinaigrette that calls for putting the feta actually in the dressing, mixing it up in the food processor. Tasted great, and if The Husband’s THREE helpings are any indication, I think we’ll be making this one again. Saw an episode of Party Line with Dan and Steve, and this was something they made. 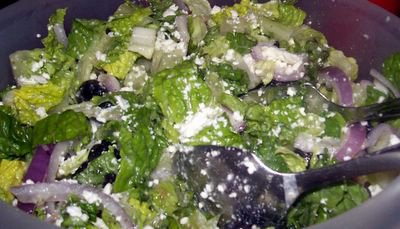 Broke out the Panini maker and made two different ones. Getting some inspiration from Joe from Culinary in the Desert and his recent turn-out of Pressed Cuban Sandwichs with Garlic Dijon Butter, I took a few cues from that and made Cuban Paninis, with Smoked Turkey, Ham, Jarlsberg Cheese and sliced pickles inside. I made a garlic butter paste (roasted garlic and softened butter mixed with a little salt and pepper) for adding to both sides of the paninis before grilling them. Delish! 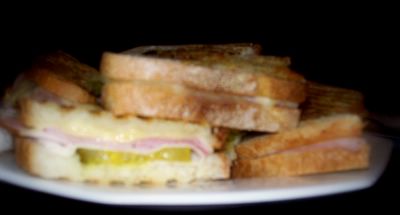 The second Panini I made would surely make Elvis proud. I put peanut butter on both sides of the bread and added sliced bananas and honey drizzles. Once it was done, out and cut, I drizzled the tops with a little more honey. Perfection in a sandwich, The Neighbor and I couldn’t stop eating them. I think the King of Rock ‘n Roll would have been deliriously happy with this new twist on his favorite sandwich.

Lastly, I made Five Cup Salad. Growing up, we called this Ambrosia. To entice our marshmallow-loving kids tonight, we called this Marshmallow Salad, given their penchant for eating marshmallows. Brings back a lot of fond memories … my Sister and I loved this stuff. I don’t think I’ve made it since Nicholas was born, but it’s still a favorite, so we’re going to have to bring it back into rotation. Can’t be easier to make: a cup of sour cream, a cup of pineapple chunks, a cup of marshmallows, a cup of mandarin oranges and a cup of shredded coconut (I use a half cup). I also add in maraschino cherries – love the taste they give it, and the pinky color. 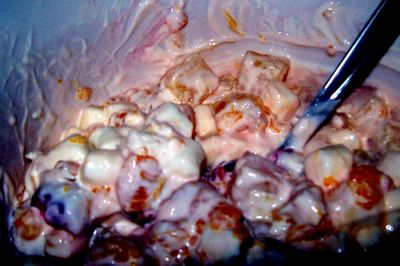 I’ll put all the recipes up tomorrow. I figure between the recap and WDB, you guys have a long enough post as it is. :)

My sister gave me some new kitchen toys last weekend. I love the salt grinder shaker thing – very cool. Haven’t tried the chopper yet, but I’ve been coveting it for awhile now — a great new gadget for my kitchen that will surely get a lot of use. 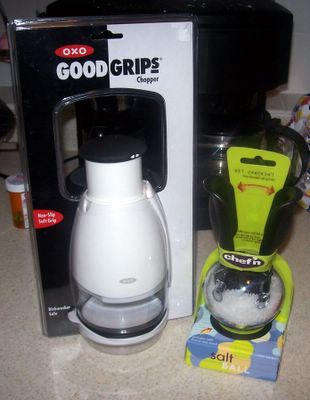 OK, without further wait, here we are at Weekend Dog Blogging #16. Pups, are you ready?

Trying to keep warm in the chilly Northeast, D checks in from The Hungry Rose: 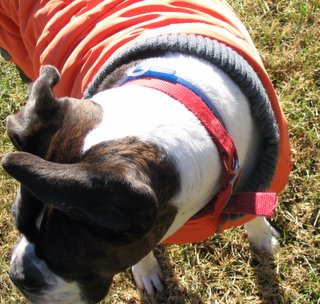 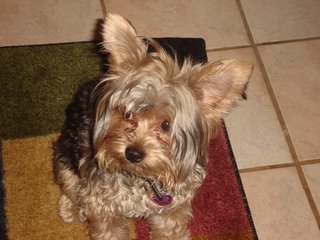 The Sleeping Pups from The Cooking Adventures of Chef Paz: Gorgeous eyes from Kahlil at Urban-Agrarian: 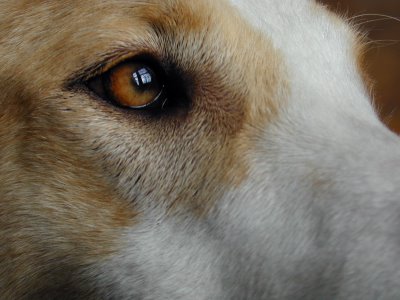 The three pooches from Dispensing Happiness, Donegal, Wicklow and Doolin: 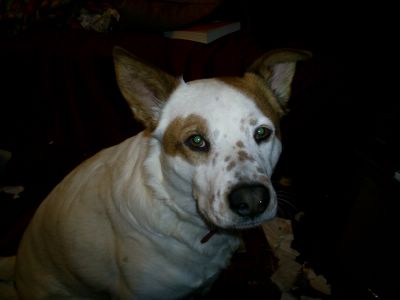 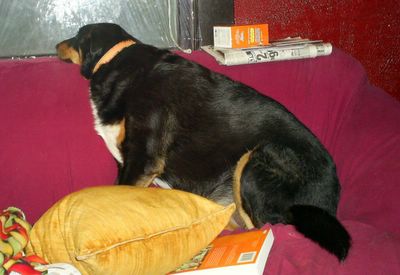 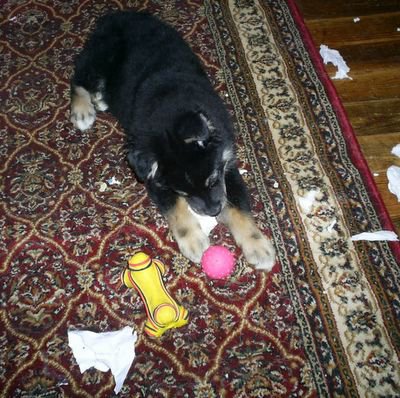 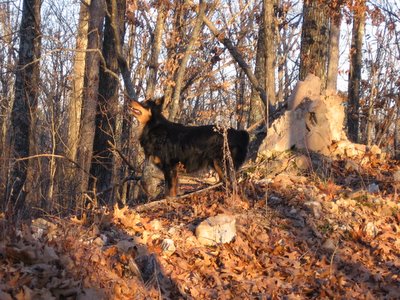 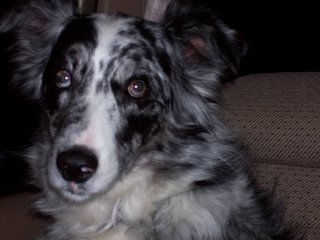 Another first-time WDBer, Pepper from Cookin’ with Cyndi joins the group:

Up a Creek without a Patl checks in from snowy Northern New England:

Lulu, the get-around girl from Why Travel to France checks in with our regular French lesson. I love this shot! There’s a French tradition for Epiphany with a crown and pastry called La Galette du Roi (the King cake). During Epiphany in France, they sell these galettes with a fève baked inside, a porcelain trinket. Whoever gets the piece with the fève, gets to be the Queen or King and wears the crown that comes with each galette. These fèves used to be more religious with praying Marys or crosses but now they’re more geared toward kids.

Another newcomer, ChiChi, stops in from Ragus Pug. 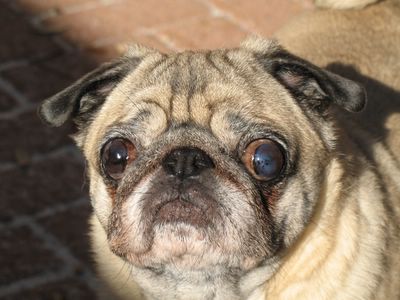 In the Dance category, Buddy from RobWonton entertains us: 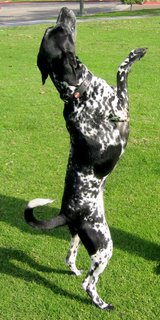 And in the “Huh? Mom, what IS it?!” category, the dogs from Musings check out Miss Lilly: 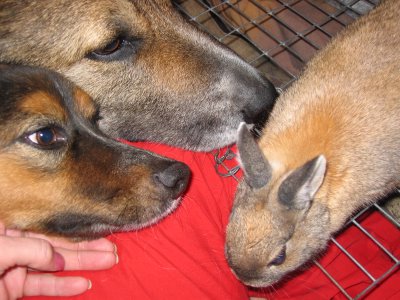 And lastly, our own contribution. This was Eli and Beau (my parents’ dog) on Christmas Day, tearing into their own holiday treats: 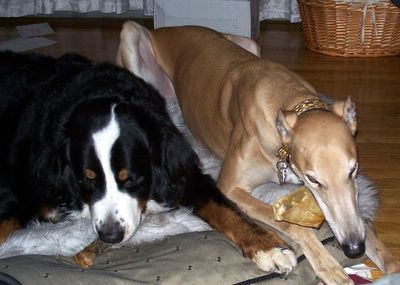