Or, I should say … The Husband is cookin’ tonight! This was actually the recipe that Nicholas and I planned to make last Thursday before a trip to the ER landed me a four day stay in the hospital. It’s a Rachael Ray recipe, from one of her very first cookbooks, Rachael Ray’s Open House Cookbook

. When I went to look it up on Amazon, I was shocked to see that people are selling it for $139 – ridiculous! I’ll post the recipe for it tomorrow … left the cookbook downstairs, and well, there’s too many stairs. ;) 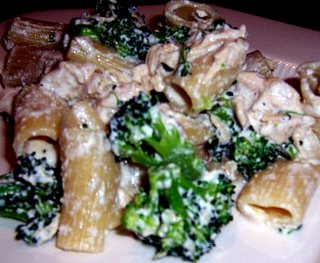 It’s a rigatoni dish with ricotta, chicken and broccoli. Even with The Husband never having cooked broccoli before, it was on the table in about 20 minutes – not too shabby. Although it makes a great quick weeknight meal, it wasn’t a WOW for us. It definitely needed more salt, and The Husband has this thing about not adding salt after a meal is cooked. Nicholas, on the other hand, ate quite a lot of it, so while it may not be a WOW for us, if Nicholas likes it, that’s enough for me.

Last week, following a series of links, I discovered that Southwest Airlines has their own magazine, Spirit. And it’s an honest-to-goodness magazine, filled with articles covering a wide variety of topics. They were kind enough to send me a complimentary copy, and ironically enough,

when it arrived, the cover picture is of Jersey’s own, Grimaldi’s pizza. I’ve heard a lot of great things about this pizzeria, and it is usually making a Top 10 list of sorts for their pizza … might be time to actually visit their restaurant and do some, ahem, research. Check out the cover picture of the magazine — it’s one of Grimaldi’s pizzas – does that look scrumptious or what? The New Jersey location (one of three restaurants they have) is still owned by the founder, Patsy Grimaldi. They are one of the few places in the country that still use a coal-burning oven (which heats the pizza up to 800 degrees and finishes it in about 3 minutes!), and that’s definitely part of their charm, and one of the secrets to their delicious, consistently chart-topping pizzas. Spirit Magazine hailed Grimaldi’s pizza as “purist pizza at its best.” Doesn’t get much better than that folks. So now you have a new magazine to check out, as well as a pizza joint. And for those not located close enough to New Jersey or New York to enjoy Grimaldi’s pizza, other locations mentioned in the article include Tony Boombozz in Kentucky, Ristorante Fiore in Boston, Franco’s Italian Caffe and Pizzeria Bianco both in Phoenix, Red Rose in Massachusetts, Bazbeaux Pizza in Indianapolis, Totonno’s Pizzeria Napolitano in Brooklyn, Caioti Pizza Cafe in Studio City and Luisa’s Brick Oven in Charlotte, North Carolina. If one of these haunts is near you, drop on by and grab yourself a slice. Consider it research.

Okay folks, all for tonight. Weekend Dog Blogging is back here as usual this weekend, so bring on your pup pics to be included in Sunday night’s round-up.

P.S. Although you can get copies of Spirit Magazine by flying with Southwest Airlines, you can also subscribe for $36/year.