The nice folks from Florida Department of Citrus e-mailed me last week, and gave me four new recipes that they developed with Chef Michel Nischan to highlight, you guessed it, oranges! Since pure orange juice is a “naturally nutrient-rich source of essential vitamins and minerals, as well as beneficial antioxidants,” it’s an excellent ingredient to use in my ARF/5-A-Day round-up. You can read more info about the benefits of oranges and the other recipes Chef Nischan developed here. I corralled Stacey from Just Braise to take a whack at these recipes with me, and I think between the two of us, there was definitely some good eating!

I made Chef Nischan’s Zesty Shrimp and Orange Fajitas with Whole Wheat Tortillas. I love fajitas, but I am all thumbs when it comes to wrapping them up as well as restaurants do. No matter though, the flavor’s still the same. Although pineapple is certainly used in savory dishes (like Chinese food), I never would have thought to use orange sections in a fajita, and as unsure about it as I was, they definitely work. I made my Guacamole Cream and lined the fajita with that first, and then heaped the tortilla with the red and yellow peppers, the onions and the shrimp. Delish! Only change I would make next time would be to cut back on the peppers, and not add all of the marinade to the vegetables after cooking (was too much). I made the recipe as is, except I warmed the tortillas in the oven. Hey, the cleaning lady was just here – there’s a limit to how many pots and pans I want to dirty! Good stuff, and The Husband rated this one a WOW, though I put it at “good.” Next up is the orange recipe that Stacey tackled … the Orange Pinenut Buckwheat Pancakes. Pretty gorgeous looking! 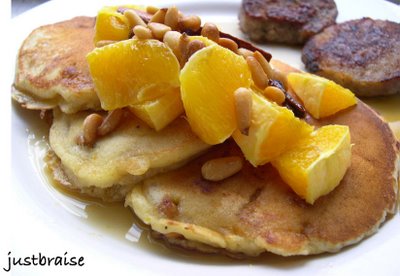 The Chocolate Lady from New York is next with a tempting White Bean and Tomato Soup with Oregano and Bay Leaves: 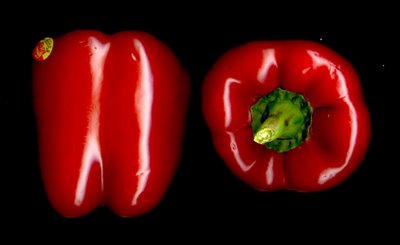 Back to entice us, The Spice is Right shares her Whole Wheat Pasta with Spinach and Feta: 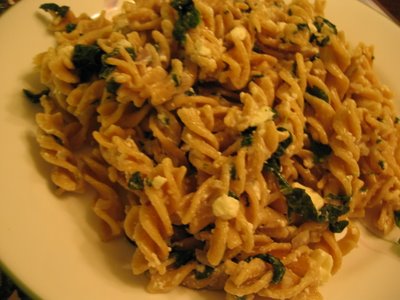 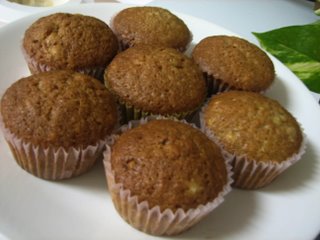 Stuffed Artichokes in Olive Oil comes by way of Veggie Way from Turkey: 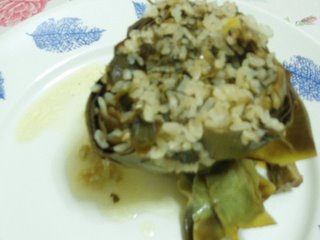 Cooking Within My Grasp brings a unique entry to the round-up this week with her Purple Cauliflower: 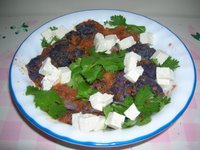 I’m always on the lookout for new stir-fry recipes, and I know we’ll be making this Leftover Grilled Chicken Stir Fry with Curry from Kalyn’s Kitchen in Utah: 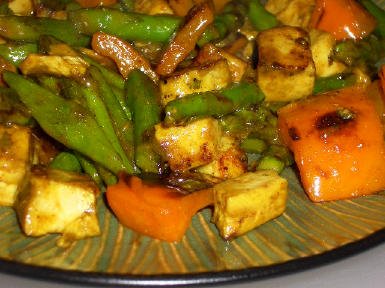 I think if wraps were around when Elvis was, he would have been a fan of Cucina Bella’s Peanut, Strawberry and Chocolate Wrap – I know I am! 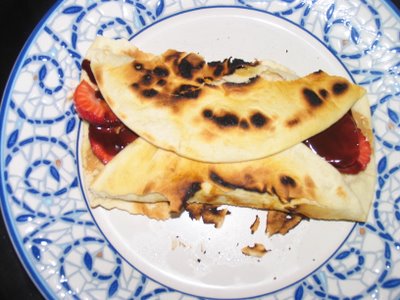 Another one that’s definitely going on my list are the Vegetable Patties from What’s For Lunch, Honey? in Germany: 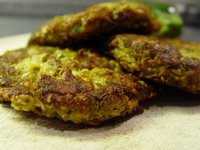 Another newcomer joins in the fun this week, it’s the The Unemployed Cook from Tennessee with her Cremini, Escarole and Eggplant Saute: 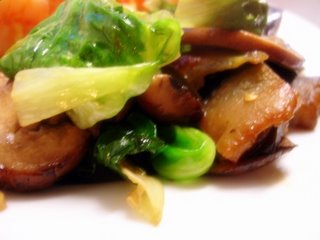 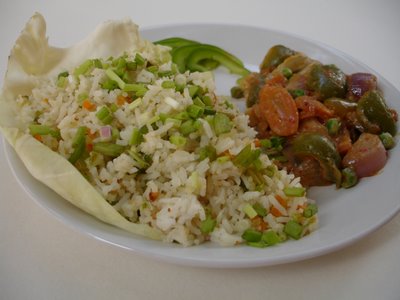 Pulling a Rachael Ray, Sugar, Spice and Everything Nice’s contribution this week is a 30 Minute Meal with her Egg Pulao & Fresh Sliced Tomatoes and dessert of Mango Delight: 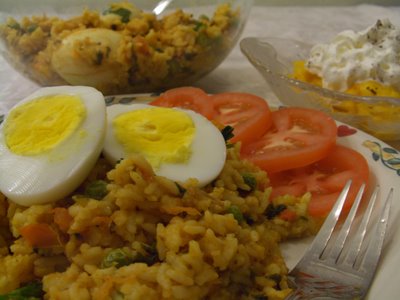 Go see what Farmgirl Fare from Missouri is doing with this … vampires beware! 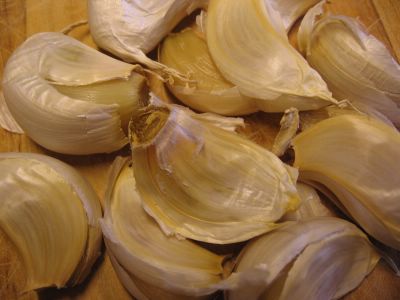 A great way to sneak those veggies into kids’ tummies, The Cookbook Junkie from Pennsylvania serves up Elbows with Sausages and Mushrooms, Carbonara Style: 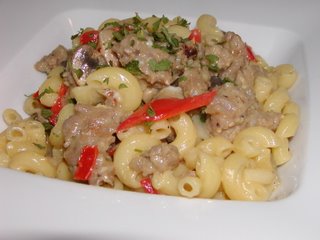 Know what the picture below is? No? Don’t feel bad, I didn’t either. But go check out Food, In the Main’s site and see what she did with SEVEN, count ’em, SEVEN other veggies.

Salt and Pepper joins us again, this time with her Kovakka Thoran:

And lastly, The Fat Free Vegan Kitchen from Mississippi squeaks in with her Zucchini Stuffed with Pinenuts and Herbed Basmati Rice: And that, folks, is the round-up for this week. Another all-star line-up, but what? No cabbage? Until tomorrow…

A year ago today… Banana Bread!.

Combine all ingredients, except shrimp and oil, in medium mixing bowl. Season with salt and pepper. Toss shrimp into marinade and refrigerate two hours. To cook: Remove shrimp from marinade and let drain for 5 minutes. Drain vegetables from marinade through a large colander over a saucepot. Bring reserved marinade liquid to a boil, then reduce heat and simmer 5 minutes; set aside.

Heat large cast iron skillet over medium-high heat. Add half the oil to pan. Add shrimp and sauté until lightly browned and cooked through. Remove shrimp from pan and keep warm. Add other half of oil to the pan, followed by drained vegetables. Cook until onions are translucent, about 5 minutes. Turn heat up to high and spread the vegetables evenly throughout the pan. Vegetables will start to brown on the bottom of the pan.

Heat large skillet over medium-high heat. Lightly spray one side of each tortilla with non-stick cooking spray. Place tortilla, sprayed-side-down, into hot skillet. Cook until tortilla begins to expand, about one minute, then flip over and cook another minute. Place tortilla on large napkin. Repeat until all tortillas are cooked.

Stack tortillas as you cook them, then wrap with napkin and place on a serving plate.