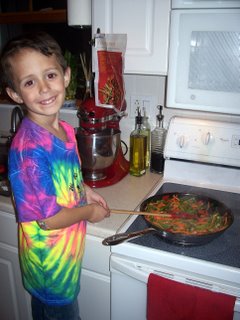 Hey all. A busy but semi-relaxing day today. House was shown again today, visited Mom at the rehab center (she moved from the hospital yesterday, so will now be concentrating on the physical therapy more) and relaxed. I managed to pop a blood vessel or two in my eye on Friday and it’s getting progressively worse, making me look like a very interesting Halloween experiment. It truly looks gross, and has apparently made me a freak show when out in public (gasp!), though Nicholas is fascinated by it. I was standing in line at the grocery store and the guy behind me caught a glimpse of it and did a doubletake to take a good hard look again, just inches from my face – nice. Saw the doctor yesterday just to make sure I didn’t need to be worried about it; honestly I just woke up with it like that. She said even something as simple as sneezing can cause it. This is actually the second odd thing this week … sprained my finger on Tuesday, completely out of nowhere. It was good for last week to come to an end. Who knew sitting still could be so dangerous? ;)

OK, dinner tonight. On Friday night, Nicholas and I made a new recipe from Redbook magazine, Beef and Asparagus Stir-Fry. Rachael Ray would be pleased – it’s billed as a 10 minute recipe, and we were pretty close to target. Filled with veggies, it’s fast, economical to make and healthy to boot. So, we had that as leftovers tonight, but that wasn’t enough, so I made a tried-and-true Rachael Ray recipe, Naan-chos. Her slightly Indian take on nachos. Just as tasty as the last time we had them, although neither Nicholas nor my stepdaughter cared for them; to his credit, Nicholas did eat all the cucumbers from the top though. Now … dessert, but first a bit of backtracking. Last week, there was a thread on Cooking Light’s bulletin board about cool must-haves that someone discovered at Wal-Mart – mini trifle dishes. Amazon also has them. Of course, when I saw them (honestly, they are too cute to resist!), I had to get some, and quickly set off on finding my own set. I knew exactly what recipe I’d make in them first … Cherries in the Snow. It’s another tried-and-true recipe, though The Husband isn’t a fan of the dessert. It’s the first time the kids tried it, and I knew they would like it, and they did, down to the last spoonful.

Alright folks, all for tonight. I’ll leave you with the Weekend Dog Blogging roundup. Until tomorrow…

First up, the adorable Mr. Woofy checks in from Kitchen Wench. We always knew he was a little angle – this winged picture just proves it:

The sweet Sophie from You Gonna Eat All That?: 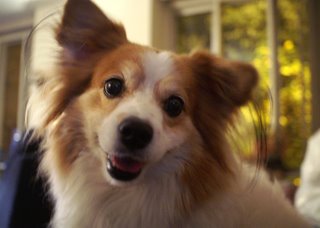 The pup from Experimentation of Taste pops in: Ziggy from Soul Fusion Kitchen in Los Angeles is back: 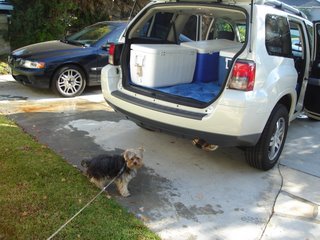 Simba from Up a Creek Without a PatL: 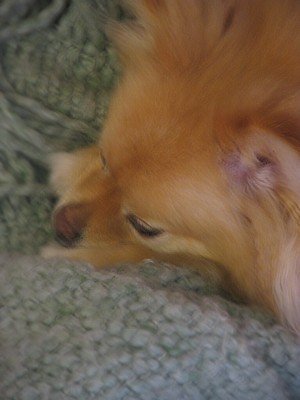 Heat remaining 1 Tbsp of the peanut oil. Add the steak; stir-fry 3 to 4 minutes. Add reserved vegetables and peanuts; stir-fry until heated through. Serve with rice, if desired.

Preheat oven or toaster oven to 400 degrees F. Heat oil and garlic in a small pot over medium low heat to infuse garlic flavor into oil. Pull the oil off the heat when garlic speaks by sizzling in oil.

Brush the breads with half of the garlic oil and reserve the remainder. Cut breads into tortilla-chip-size wedges. Sprinkle bread “chips” with Parmesan, poppy seeds and red pepper flakes. Bake breads to toast, about 5 minutes. Remove bread from oven and sprinkle bread chips with and parsley and salt. Pile chips on a platter and cover with cheddar cheese. Place platter under broiler and melt cheese.