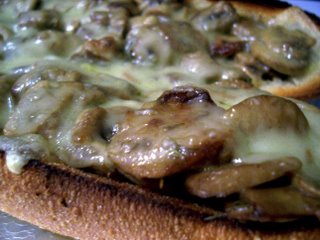 During the week, I spend most of the day at my parents’ house, mom-sitting. Although she is home from the hospital, she still can’t really stay home alone, at least not for extended periods of time, so I’ve been spending a lot of time there. It’s also been a great time to catch up on my magazine backlog – I can almost see the light at the end of the tunnel. Earlier in the week, I was reading an issue of Fresh magazine (an import), and a soup recipe caught my eye. Generally mid-November would be perfect soup weather, but, of course, the last couple of days, it’s been in the 70s. Go figure.

Anyways, back to the story. I spied a recipe for Camembert and Champagne Soup. How can you not gravitate to something like that? Very simple to make, it’s smooth and creamy, but not overly rich. It was just right. Rachael Ray made a recipe recently that looked divine … Really French, French Bread Pizza, oozing with dark, golden sauteed mushrooms and melty cheese. This one is from her new cookbook, 2, 4, 6, 8: Great Meals for Couples or Crowds

. Even though I’m the only one in the house that will eat mushrooms, I made it anyway, sending the kids over to The Newlywed Neighbors with half of it. And lastly, Nicholas has been on a major salad kick this week, and who am I to ignore that? I wanted to make a Greek salad for him, since it’s one of his favorites, and found the perfect recipe … Chopped Greek Salad with Feta and Olives. He gobbled it up. 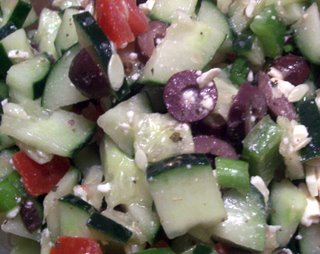 Before I go, remember those Lean Cuisine insulated lunch tote bags that I mentioned back here? I wasn’t paying attention to how many I ordered and ended up with 2 extra. If anyone is interested, drop me a line. They’re $10/each, including shipping (and half the money went to the Susan G. Komen Foundation). They’re very cute and no longer available. If you look on the Lean Cuisine site, the ones I have are pictured on the far left.

Pulse vinegar, oregano and garlic in a blender to combine. With the machine running, gradually add oil through the top vent.

Preheat the broiler. Wipe the mushrooms clean with a damp towel and slice. Heat a deep skillet with EVOO and butter over medium heat. When the butter melts into oil, add the bay leaf, garlic and mushrooms. Cook until the mushrooms are dark and tender, 12-15 minutes. Season with salt and pepper. Add the wine and cook for 1 minute. Add in the Dijon, Worcestershire and thyme, let reduce and thicken. Turn off the heat and reserve.

Split bread lengthwise. Hollow out some of the insides. Toast the bread lightly under the broiler. Fill evenly with mushrooms then top with cheese. Put loaves back under the broiler until cheese is melted and starting to brown. Remove from oven, cut each half into thirds and serve.

Heat the olive oil in a pan and sweat the onion and thyme until soft, but not colored. Add the potato and continue to cook for another five minutes. Add the Champagne and allow to reduce by a third in volume. Add the vegetable (or chicken) stock and cook until the potato is thoroughly cooked (about 20 minutes). Add the Camembert and heat until it has completely melted. Blend the soup until completely smooth (I just used a potato masher) and pass through a sieve. Add the cream and heat again slowly, but do not boil. Season to taste.