Don’t you love it when a loose plan comes together all on its own and everything is smooth and seamless? Yeah, me too. Tonight’s dinner was like that (though yesterday’s was pretty smooth too, so maybe we’re onto something).

Tonight we had an old friend over for dinner. We haven’t seen Chris in, after we figured it out, about 3-1/2 years … it seems like much longer, but it was nice to get together and catch up. Anytime we have someone over for a meal, I always ask what their food likes and dislikes are, because it makes menu planning much easier. No sense slaving over a hot stove making something that they don’t like or won’t eat, right? I actually keep a little notebook to keep track, even noting what kinds of drinks people choose, what they really like, etc., all the better to have happy guests. I remember Chris had a major aversion to mayonnaise and mushrooms, but aside from that, I was a little hazy. I asked, and mustard and vodka cream sauce were added to the list. Since I was originally planning to make Penne with Vodka Cream Sauce, it was definitely good that I asked.

Up until yesterday, I was strongly leaning towards Spaghetti Carbonara, which we haven’t had in ages, and Stuffed Garlic Bread, but I kept changing my mind. I just knew I wanted to keep it simple. I ended up making a new Roast Chicken recipe, which was downright delicious, and could not have been easier, and starting dinner with a Greek Salad. Love the stuff.

The chicken takes just minutes to assemble and cooks peacefully for an hour and a half. It doesn’t get much simpler than that. A few minutes before dinner, I quickly whizzed together the ingredients for the Greek Vinaigrette and tossed it in a bowl with romaine lettuce, Kalamata olives, feta and red onion (2 items I even already on hand).

If you’re looking for a perfect easy Sunday recipe, do try the chicken (slight modifications are noted below) – you won’t be disappointed.

And now, the pups.

When I saw all the puppy pictures of Phoebe on the site, Pip in the City, it was so hard to pick which one to put here. Make sure you go check out the others, each one cuter than the next: The trio from Urban Agrarian are back – how perfectly poised they are! 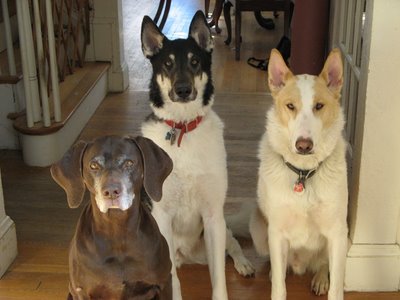 Although a Blogger glitch is preventing his picture from appearing on Soul Fusion Kitchen, Ziggy was kind enough to send it in for the roundup: The puppy madness from Dispensing Happiness is back – lots more pictures on the site to check out, but here’s a tease:

Kita from Sugar High Mountain Farm keeps an eye on the pigs: Newcomer Bessy from Pulau Yue-Li joins in the fun – love the tongue shots! Sophie is up next from You Gonna Eat All That? And last, but not least, my parents dog, Beauregard. Nicholas has been dogsitting him for the past week, and Beau went home yesterday. When Nicholas was at school, Beau loved to sleep on his bed. That happens to be the favorite nap spot of one of our cats, Callie. If she beat him there, he’d start whining until someone helped him share space with her. Big baby. Sweetnicks’ Notes: Instead of doing the potatoes separately, I added them to the roasting pan. Because of that change, I added more wine. No review on the asparagus yet – that’s tomorrow’s plan.

Preheat oven to 425°F. Place turnips, parsnips, carrots, shallots, fennel wedges and wine into a roasting pan. Drizzle with EVOO and season with salt and pepper.

In a small bowl, combine the chopped fennel fronds, tarragon, parsley, grated garlic, lemon zest, 1/2 cup of EVOO, salt and pepper. (Instead of the EVOO, I used 1/2 cup of softened butter to make it more of a paste)

Rub mixture all over the chicken, place the pieces on top of the vegetables in the roasting pan and season with salt and pepper.

Bake for 60-90 minutes, or until chicken is cooked through and vegetables are tender. Remove from oven, cover loosely with foil and let rest 10-15 minutes.

Once the chicken has been in the oven for 45 minutes to an hour, place the potatoes in a medium sauce pot and cover with cold, salted water. Place on high heat and bring up to a boil. Cook 12-15 minutes, or until potatoes are cooked through. Drain potatoes and set aside.

Once the chicken is out of the oven, add one inch of water to a high-sided skillet and place over high heat. Bring to a simmer and add asparagus. Cover and cook for 5-8 minutes or until asparagus is tender.

Drain the asparagus and return to them skillet. Place over medium heat and add the Dijon and butter. Toss until the butter has melted.

To serve, place a portion of chicken on a dinner plate, add a scoop of the roasted veggies and spoon some of the pan juices over the top. Serve the Dijon asparagus and the potato-leek mixture alongside.