The best buttercream frosting ever can be made from a few simple ingredients that you already have in your kitchen. You’ll find yourself making this one again and again. 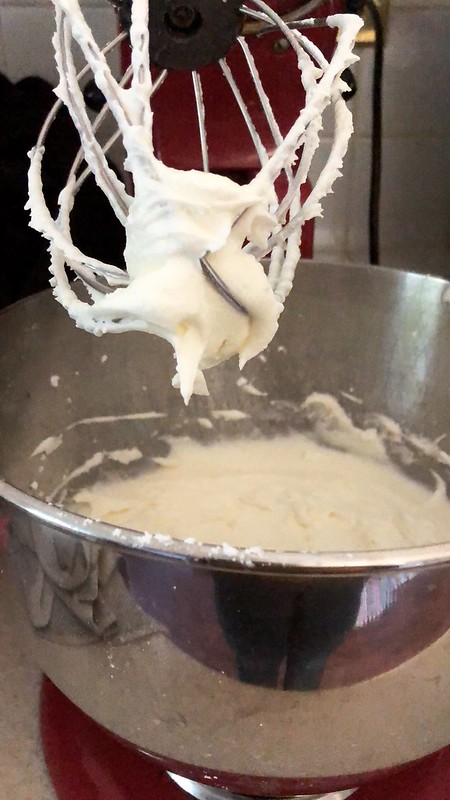 A friend asked me the other day if I thought about writing a cookbook.  No, I haven’t.  Truth be told, I have a nice cache of recipes I’ve created on my own, but my problem is writing them down.  I cook a lot like traditional grandmothers … a little bit of this, a little bit of that, wait, more of that.  I create the recipes based on feeling, intuition, how they look, tasting along the way.  That’s hard to put down in writing.  This buttercream frosting recipe is the perfect example.  To me, the frosting on the cupcakes from Billy’s Bakery in New York City was the one to beat.  I tinkered.  I played.  I improvised.  I created.  Four ingredients.  That’s all it needs.  Yet the finished result for me was always based on how it looked.  Its consistency.  And then, of course, followed by the taste.  But the measurements were what failed me.  I never measured.  I just did.  But a few months ago, a friend asked me to share my recipe, after having it one too many times here, and I decided it was time to figure it out.  There are some recipes I’d like to be able to pass down to my kids, and I can’t do that if I don’t find some way of getting them written down.  Another food goal for me this year.  Commit more of them to writing.

The ingredients are simple.  Butter.  Milk. Confectioner’s sugar.  Vanilla.  That’s it.  I tend to like my buttercream frosting a little on the stiffer side.  If you prefer yours a little thinner, just add a touch more milk until it’s where you want it.  Buttercream is my go-to frosting.  Whether it’s on a batch of homemade cupcakes, or atop a birthday cake or Rainbow Cake or smooshed between two Cinnamon Nut Spice Cookies (for that one, I make a maple buttercream version), I’m all about the buttercream. Forget Billy’s.  This one is now the one to beat.  And it saves me a trip into the city to boot. Eli never fails to get a laugh when he does this. He’d much rather walk himself than have someone else hold the leash, thankyouverymuch.

Place softened butter in bowl and add confectioner’s sugar.  Mix well, and then add the milk and vanilla.   Mix until smooth.  Enough to frost a two layer cake or 30 cupcakes.