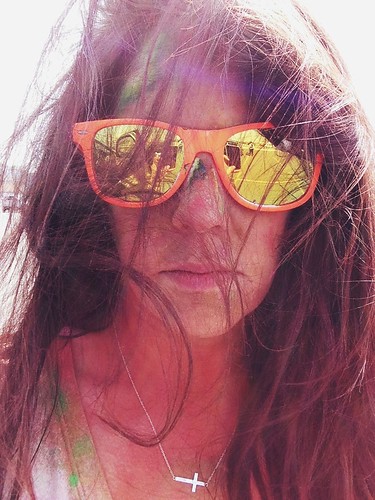 The kids and I, and a friend, did the Run or Dye 5K the day before we left on Spring Break. My mom thought I was crazy, loading up our time right before we left for vacation, and she might have been right. Except for the fact that that was the only thing we had to do that day, along with dropping off the dogs at their assorted caregivers for their own “vacation.”

This event was located right at MetLife Stadium in East Rutherford, with the 3.2 mile course laid out in the parking lot. Our wave was at 9 am, so luckily between the proximity to our house, and the later start time, we didn’t have to get up at the crack of dawn.

Almost at the crack of dawn, but not quite. 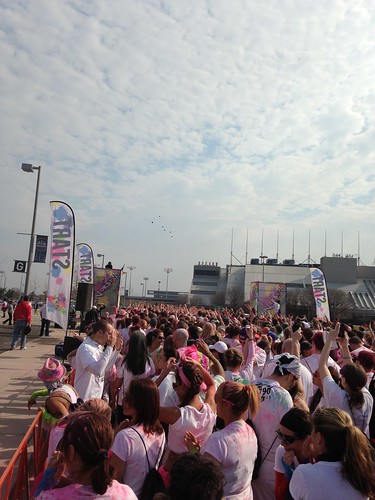 This was our first 5K to kick off the season this year. The kids and I usually do three or four a year, and it’s definitely a firm signal to Spring weather. The temps were in the mid-60s that day, which was pretty perfect. We’re signed up for one in July, and I’m betting I won’t be saying the same thing about “pretty perfect” weather. 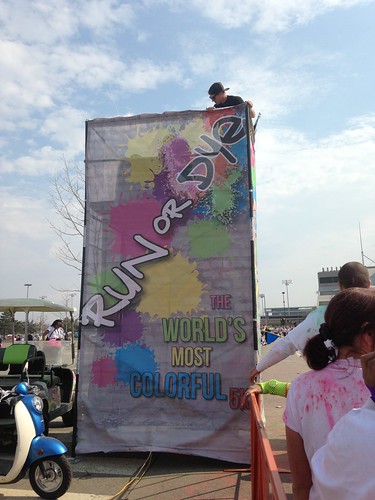 Since the advent of the originator The Color Run, tons of different similarly themed races have been cropping up ever since. Like last year’s Color Me Rad, and this Run or Dye, they’re all basically operating under the same premise. You go through various color stations and have colored powder thrown at you by volunteers.

All of the races give a portion of the proceeds to a local charity, which I love, and it makes for awesome photo opps, natch, and generally a great way to kick off your day. Although a good boost of steps for my Fitbit, with its 3.2 miles, the distance is really no big deal. I mean, Madeline has been doing them since she was three. 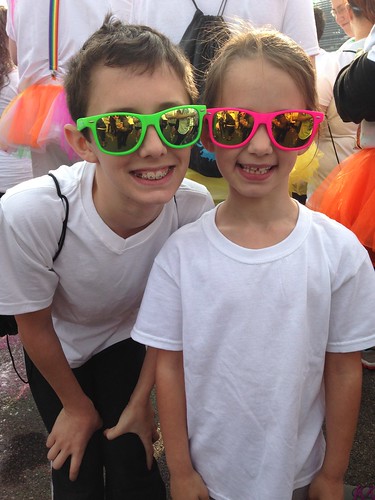 There are subtle differences between each of the throw-color-on-you 5ks, but nothing major, and if you haven’t done a host of them, you likely wouldn’t notice. That being said, I think the original Color Run does the best job of it. They’ve been doing it longer, obviously, and they know how to do it and do it right. Seamlessly.

When you pick up your registration and running bib, included with your fee, Run or Dye gives you a drawstring bag, which was awesome, except two of ours broke that same morning. They also gave out thin rubber band bracelets, especially loved by the kids, in neon colors (hello 80s resurgence!). Some races include tattoos, which I love. This one didn’t, although they were available for sale. A branded t-shirt is included in the swag as well.

Most of the color 5ks have 5 color stations. This one had the same, I believe, although with the twist that two stations combined two colors (more color ftw!), which was great. One station had both green and yellow and another had purple and pink (my favorite). One station, interestingly enough had white. Since everyone is wearing white shirts (all the better to get more color), although this was a unique twist, it didn’t quite resonate. Moreover, the white color was the last one, which means it kind of diluted the color you had picked up along the way. If white *has* to be there, reorder it. Maybe first as a base would be better? 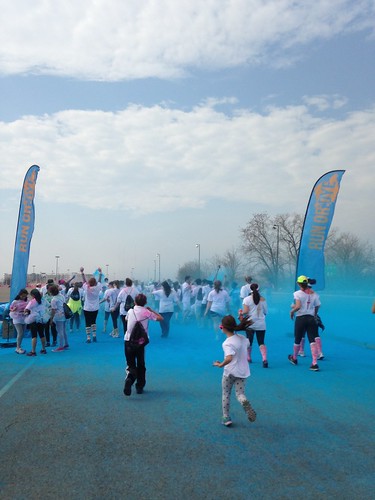 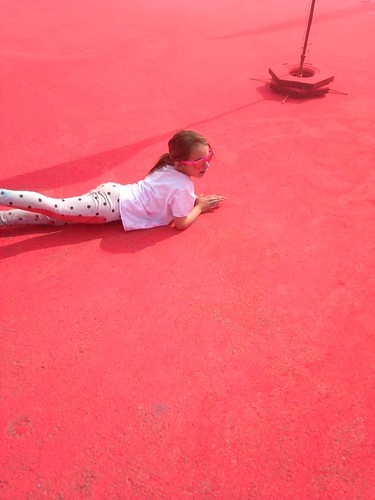 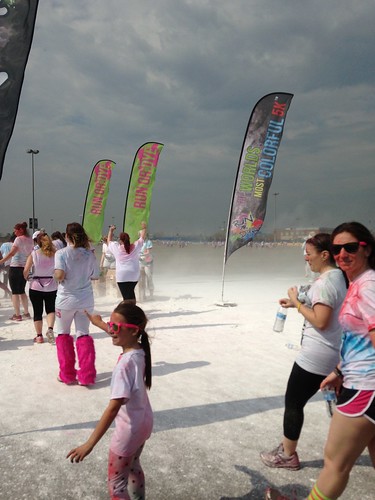 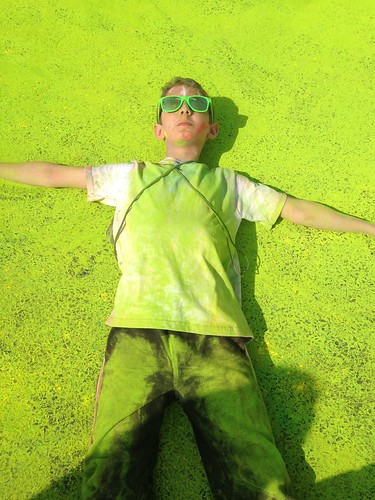 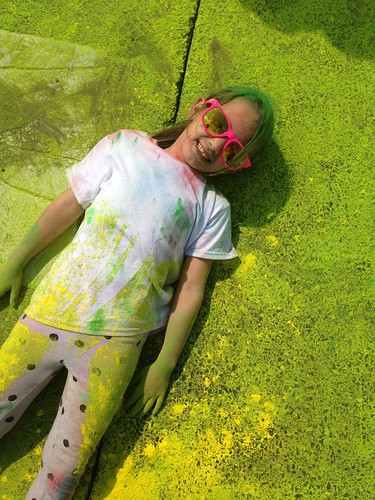 The race kicked off late, which meant we were queued up in line way longer than we had been for any of the other races. The gate was officially opened about thirty minutes past the original starting wave time, and it took 45 minutes until we were close enough for us to actually start. Over ten thousand people took part (compared to The Color Run’s 25,000 in the 2012 race we did).

There is one water station midway through the race. More stations along the way would have been nice. Also more garbage cans or recycling bins would have been nice too. There were a bunch at the Start and Finish line, and one right after the water station, but nothing else. Which means if you grabbed water along the way (um, everyone), and didn’t chug it right away (um, everyone), you were stuck holding it the rest of the race or you littered (a lot of people). 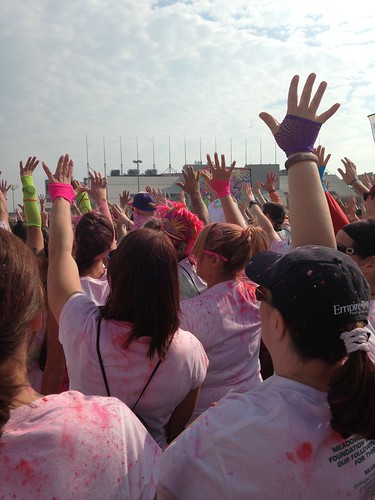 And speaking of garbage, every time we heard the DJ/emcee, Sam, which was at the beginning and end of race, he was reminding people multiple times to pick up garbage. Even going so far as to pass around a giant box to collect it in. The request was said so often, we wondered if MetLife had said something about the condition of the lots after other races that have been there. The concern about the trash is great, but would have been easier to comply had there been more trash receptacles available at additional locations. 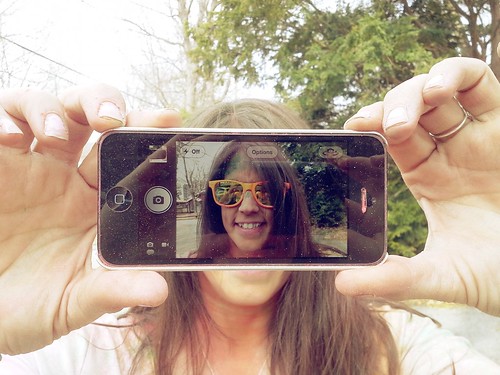 The DJ was lively and upbeat, and took time to give the military a shout-out and show the race’s support. He told everyone to high-five their neighbor for being out so early on a Sunday morning, and took time to acknowledge anyone celebrating a birthday that day (with a serenade and free t-shirts). Sam and his co-hort gave out a ton of free color packs at the Finish line. They have three “color parties” at the end of the race to celebrate finishing, and to make sure everyone gets plastered with all the color they want. 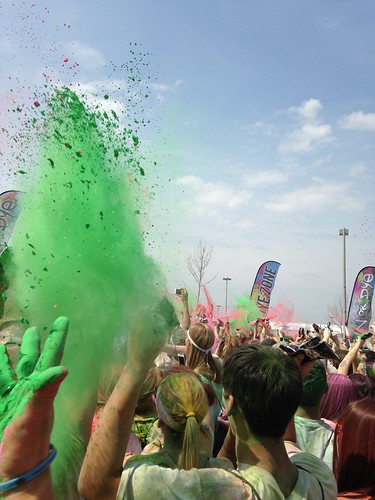 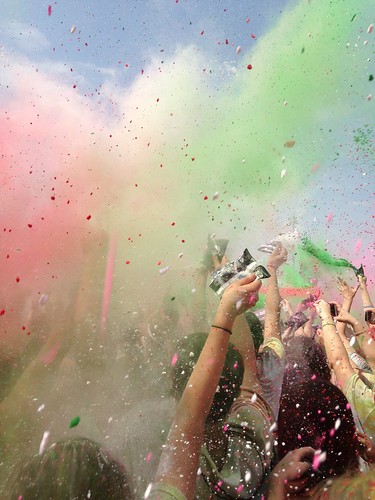 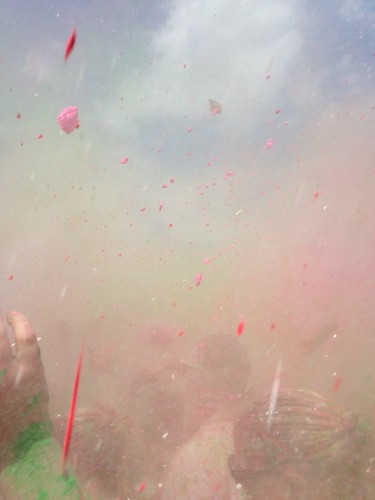 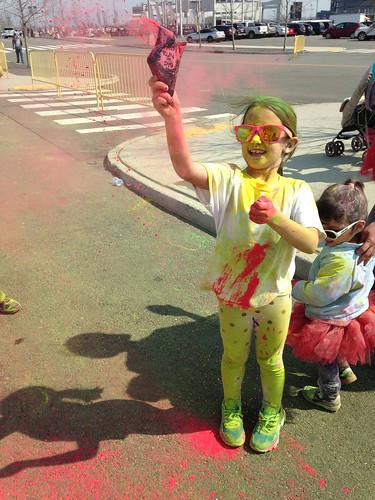 At the end of other races, and most notably, The Color Run, there are food stalls and assorted vendors at the Finish Line. Not here. There was a stall selling Run or Dye merchandise, and that was it. A vendor selling fruit and granola bars and the like, as we’ve seen at other 5Ks, would have been awesome.

All in all, a great day, full of color and happy and exercise. 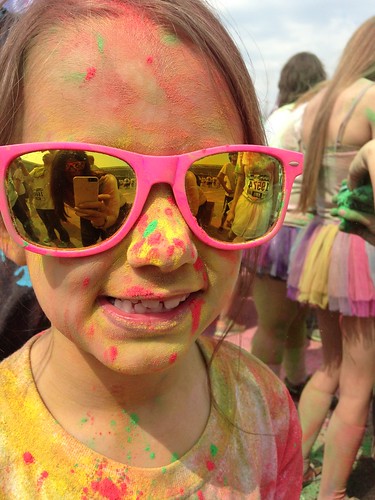 Which ended up being the perfect kick-off to our Spring Break. 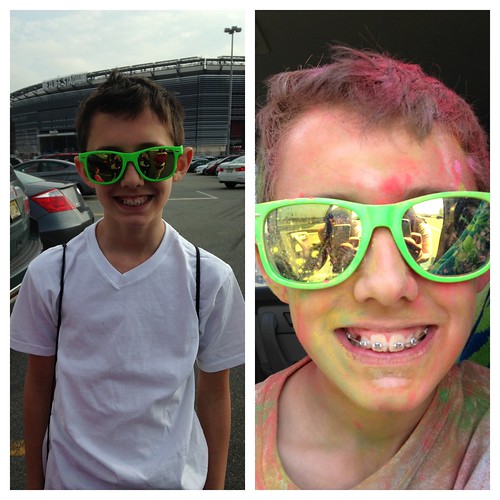 If you haven’t participated in a color-based 5k yet, there are a bunch of tips right here. Do see if there’s one in your area (they’re all over!), from any of the color franchises – it’s too much fun to miss out on. 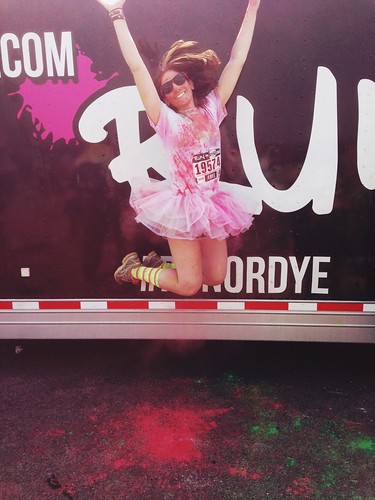 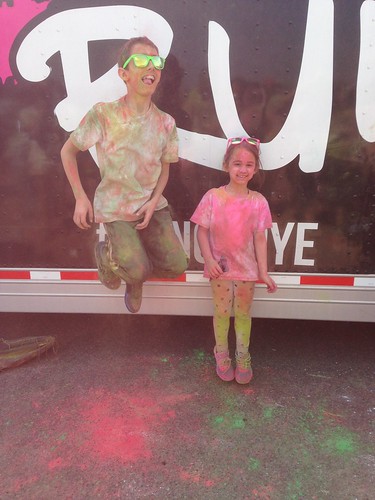