Need to know the best eats in Nashville? Jack’s Bar-B-Que. That’s pretty much all you need to know. 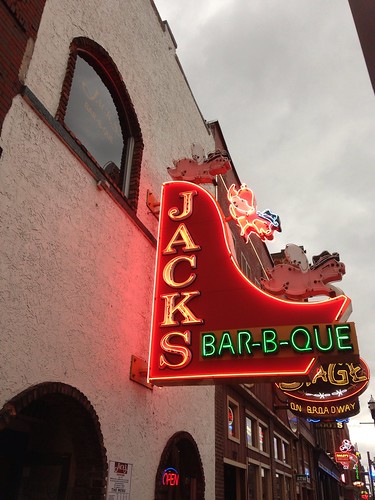 As soon as we pulled up to our Nashville hotel for our first night in Tennessee, I asked the valet for a dinner recommendation.

Want to know the best place to eat in town?

But I gave him very specific criteria.

Kid-friendly. Reasonably priced. Not a huge wait. A place that screams Nashville.

And the place where he would go to if he could only go to one place in all his time in Nashville.

And Jack’s Bar-B-Que it was.

Originally started as a catering company in 1976, the restaurant was about four blocks from the hotel, and since the weather was pretty clear, and I am intent on keeping up with my Fitbit friends, we decided to leave the car and walk to dinner.

Which totally would have been awesome had the skies not opened up during dinner to welcome us with a torrential downpour.

Nothing that a six dollar cab ride can’t fix. 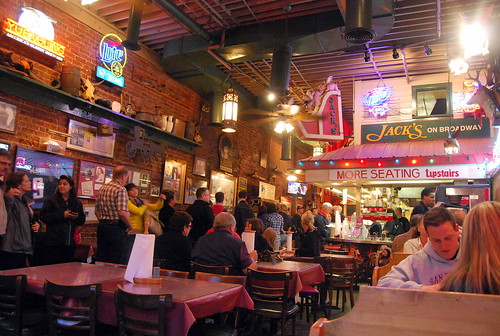 So we walked into the lively Jack’s and I dispatched Nick to grab a table. There are a handful of tables in the front of the restaurant, and more on the second floor (seating that you can view from a tv screen while you’re in line).

Luckily we were a bit early for dinner, and there were just a few people in line. I queued up and started scanning the menu so I would be ready. The menu is short and direct.

They are focusing on what they’re good at.

Which is pretty much the way to go.

During our Tennessee adventure, I wanted to be sure to hone in and enjoy local Tennessee specialties. Really chow down on the best the state has to offer.

And BBQ is definitely a sure-fire way to go.

Right before I placed my order, one of the servers rattled off a list of meat that they were already out of, three items, to the line that had quickly formed behind me. Luckily what we wanted was still available.

With a sampling of nearly every side they have to offer. 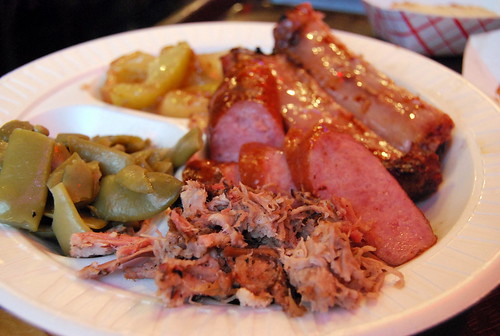 I moved down the line, got my drinks and we sat down and dug in.

Barely coming up for air, I asked the kids what they thought. Nick had inhaled the meat on his plate and was ready for round two. With the line nearly out the door, but a table close enough that we could hop in when it died down, we waited a bit. This time, he went with a Pork Shoulder sandwich. 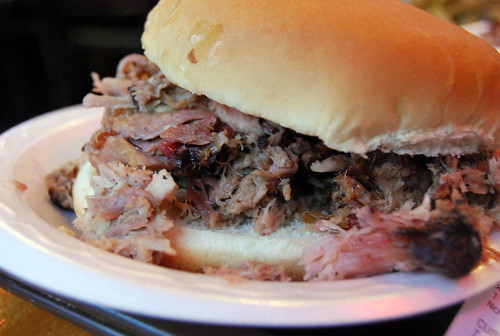 The meat is beyond tender. But largely underseasoned. Which makes it pretty perfect once you add their house-made bbq sauce to it. A smart marketing move for sure, since they sell several varieties of the bbq sauce to take home, but it also makes it easy to appeal to a broader customer base … those who like just a touch of sauce, those who want it with a bigger kick, and those that just like it dry.

With a slightly sharp tang of their original bbq sauce, it was just perfect. On our, um, third round, we just ordered the pork shoulder by the pound.

We restrained ourselves from licking the plate. 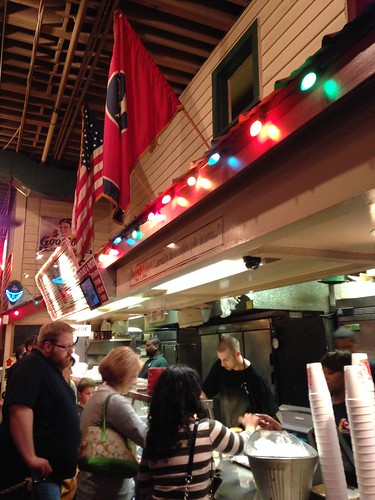 The vegetables were all good, solid Southern fare through and through. Everything lightly seasoned, the perfect temperature, and generous portions. Nothing that was a true stand-out, but comfort food that was the perfect foil for the main event.

There were several slices of dessert available on the front counter, but as tempting as they were, we passed.

Because, you know, pork shoulder.

There are fountain drinks (with free refills), and a bbq station so you can put on as much and as little as you want. No wait staff, this is casual, stand in line, get your food, sit down, and eat. No frills but full-on friendly.

We ended up buying several jars of bbq sauce and their spice rub to take back with us, and surprisingly, given our grand total of a ridiculous amount of glass in our suitcase, everything arrived home in one piece.

Because, man, that would have been quite the challenge trying to get bbq sauce off of everything.

Our hotel valet knew what he was talking about when he extolled the virtues of Jack’s Bar-B-Que. If you happen to find yourselves in Nashville, do check it out.

Although there are three locations to visit, this is the one we dined at:

It is not to be missed.