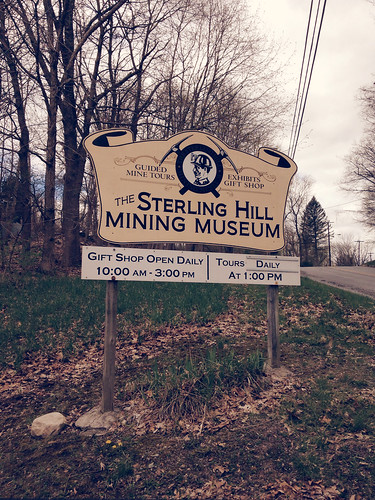 When my sister and I were kids, we used to do family day trips on Sunday, with each of the four of us taking a turn choosing our destination. I routinely chose Chinatown or somewhere else in NYC, as my sister did sometimes as well, and my Dad was always good for something steeped in history (bonus points if it was Civil War or involved trains), and my Mom usually chose something with antiques.

And so when the kids and I found ourselves with a completely free Sunday this past weekend, we set off on our own little adventure. I have a running list of activities saved on my phone, which is a great reference point when we’re looking for something to do. And also so I don’t forget any places I want to visit. A great jumping off point, it’s a mix of local and not-so-local destinations, and has a variety of things to appeal to all of us. It includes everything from activities and destinations to food we want to hunt down.

As we were getting a slow and lazy start to our Sunday, I had narrowed down our destination to four locations. One was two hours away, one an hour, and two under an hour. I decided I didn’t feel like driving four hours over the day, in an attempt to retain the chill vibe we had going on, so crossed that location off the list. The destination that was an hour away would have been good to tack a picnic onto to as well, but it was a bit too windy for that, so I crossed that one off our options list. The place that was 45 minutes away had two tours during the day. One in the beginning, and one at the end. Neither of which worked for our plans.

So with the process of elimination in full effect, we ended up at the Sterling Hill Mining Museum.

With two extra kids in tow.

A mere thirty minutes from our house, one of my continuing goals for this year is to discover more of what is already in our own backyard, so this was perfect for that as well. Nick has been on a field trip to this place before, but the girls and I hadn’t visited before. He has a keen interest in rocks, so I knew that even though he had been before, he wouldn’t mind going again, and it turns out that parts of our tour he hadn’t done with his class, so win/win.

An easy drive off the highway, the Sterling Hill Mine has been around since 1761. It officially ceased mining operations in 1986 for a variety of reasons, and after being sold in a tax sale in 1989, it reopened as a museum. It was later classified as a state historic site, and a national historic site, and is also a non-profit. The mine is perhaps most known for its zinc ore with a high concentration of minerals that glow underneath an ultraviolet light.

See also: fun for all ages.

The two hour guided tour starts in a 5000 square foot building that is packed with various exhibits. We were encouraged to participate in a scavenger hunt there, which was fun and kept the kids busy running from one corner of the hall to the next. 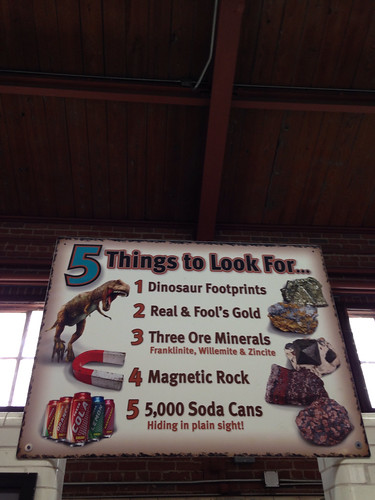 Beyond the scavenger hunt items we were looking for, there is over six million dollars worth of minerals in this building alone. When the mine was in operation, this is where the miners would change and shower. Forty showers lined one wall (and are still there, seen on the right hand side of the below picture), and iron baskets hang from the ceiling. The building was kept warm and dry, and at the end of the day, the men would put their clothes and boots in one of the baskets and string them up to the ceiling where they would dry overnight. 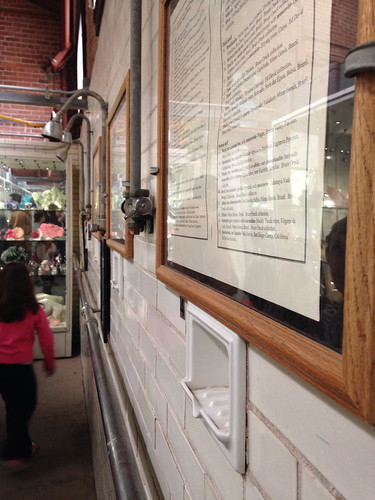 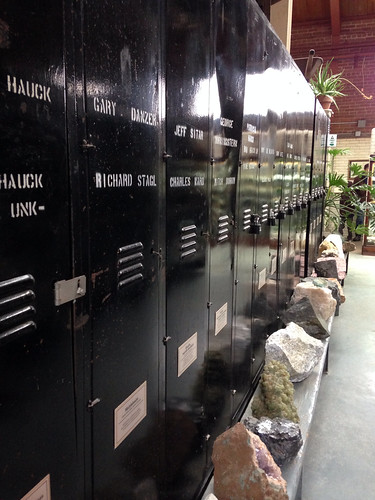 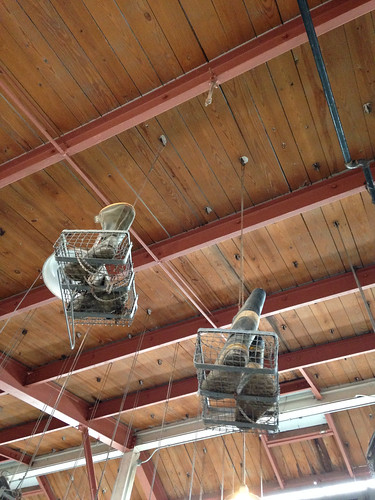 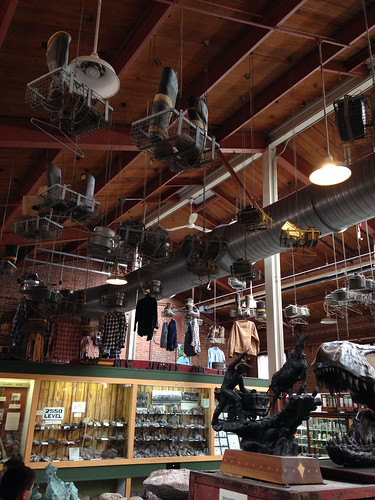 After our time in the building, we set off to enter the mine. If it is cold outside, the mine is warmer inside, and vice versa. It was about fifty degrees when we were inside, which was pretty perfect. The mine has 25 levels, and only two safety exits. This is when I knew I could never be a miner. I couldn’t imagine the panic trying to get to an exit. Pretty much because I saw how far apart they are, with one being some 1850 feet deep into the mine.

Added to, of course, the lack of, ahem, restroom facilities inside the mine. The kids were completely grossed out when they saw the specifics. 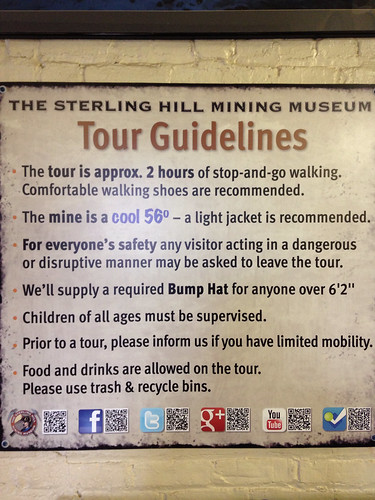 During the course of its heyday, 11 million tons of zinc were removed from the mine, but there are still over a million tons inside to this day.

One of the first areas that we visited on the mine tour was the Lamp Room, which is also where the miners would start their day. They would take one of the numbered brass tokens off the wall, signaling to their supervisor that they were there for their shift, a helmet with a rechargeable battery-operated light (good for ten hours), and a self-rescuer designed to help the miner with their breathing should something happen during the day. 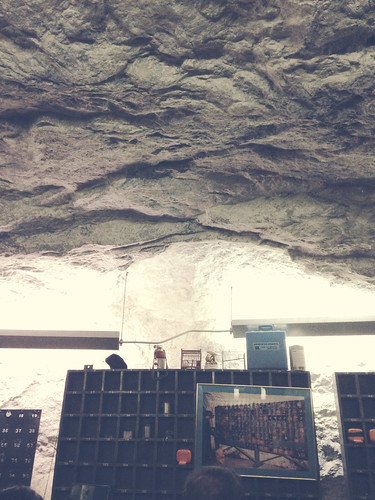 The tour inside the mine was quite thorough, more so than I expected, and we explored every nook and cranny of that place. I made sure to keep an eye on where our guide was the whole time, because the place is like a maze. Adam was a great tour guide, and knew the history backwards and forwards. 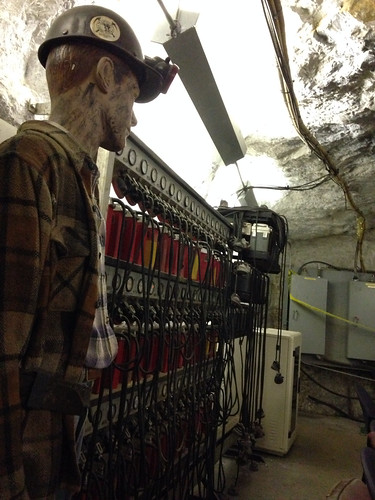 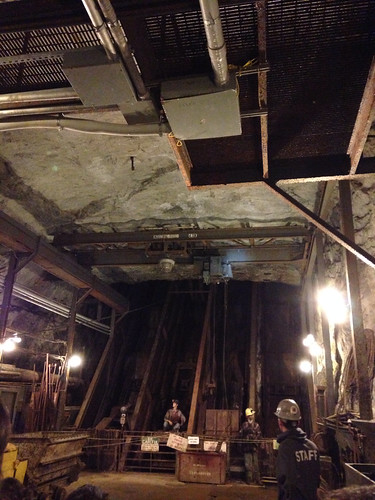 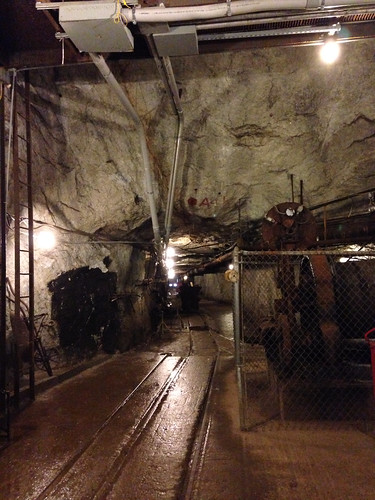 One of the stops along the way was the Rainbow Tunnel, which has a vein of fluorescent zinc ore, which doesn’t exist anywhere else in the world. There are buckets filled with fluorescent zinc ore in this room, and we were allowed to select a piece to bring home. Not before seeing it under the ultraviolet lights of course. 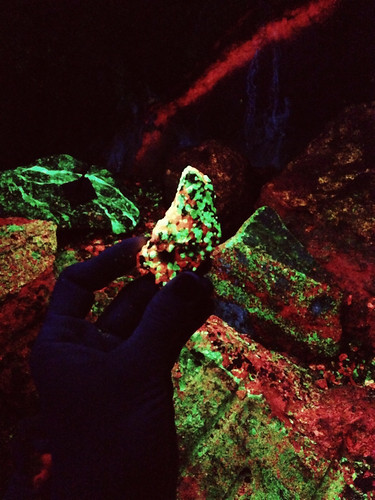 The tour wrapped up in the Warren Museum of Fluorescence, where there are over 700 pieces of fluorescent minerals, as well as every day household items that also fluoresce (Slinkies!). 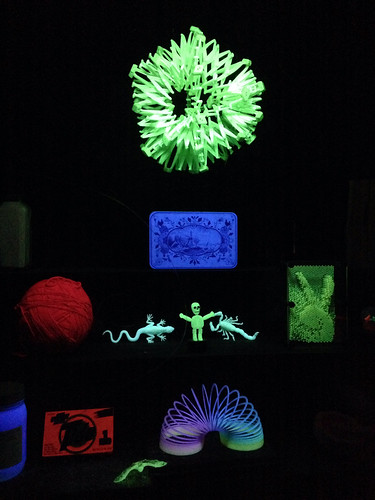 After the tour, there is a small gift shop to browse through, and a lunch area that served pasties (the favorite lunch of miners, and you can read more about pasties and their history here), along with mini pizzas, hot dogs, and other snack items. 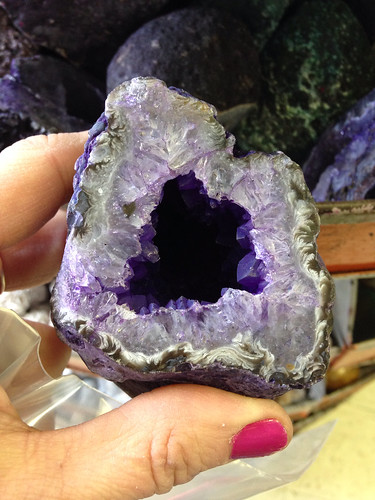 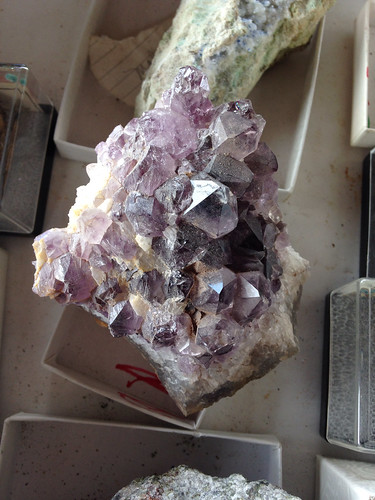 Tours are done daily at 1 pm, and the mine is open seven days a week, rain or shine.

If you happen to be looking for a fun excursion, kids or no kids, it’s a unique place to check out, and at the inexpensive tour prices (AAA discount as well), it’s worth a visit.

Hungry for more New Jersey day trips?
You can visit Thomas Edison’s estate, museum, and laboratory for a rich step back into his life and mind.
Now that the weather is starting to warm up, head for the Jersey shore and Jenkinson’s Aquarium.