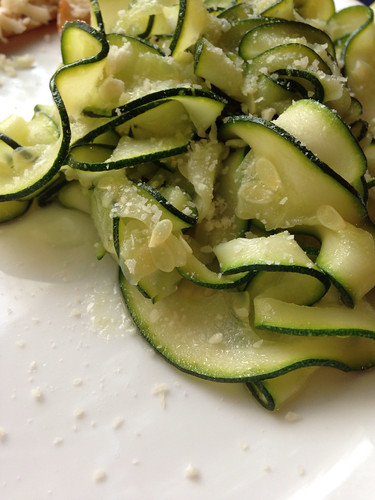 Real estate in my kitchen is a pretty valuable commodity.

Which is to say, it’s not filled with gadgets, machines, and the newest as-seen-on-tv must-have.

No bread machines, pasta makers, and not even a rolling pin.

A quote from William Morris comes to mind. “Have nothing in your houses that you do not know to be useful, or believe to be beautiful.”

I’ve never been a fan of low-use items, and I really just keep my kitchen maintained with the basics.

It worked in the kitchens of the 1950s. It works now too.

But every now and again, there is something that proves its case and I make an exception.

I’ve been making zucchini noodles (sometimes also referred to as zoodles, which is perhaps even more fun) for awhile now, doing it the old school way via vegetable peeler.

And it works fine.

But then I happened to see a spiralizer in action last year and became intrigued. 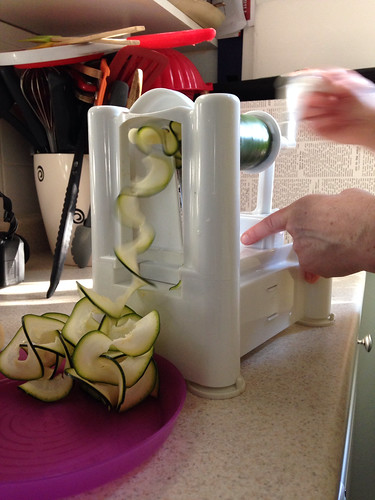 One, because it makes quick work of making vegetable noodles.

And two, because there is less vegetable waste using it. I just slice off a little from both ends of the zucchini, put it in, and go to town.

Which means we get a little added nutrients from the (well-washed) skin and less is going in the trash.

Which is kind of a beautiful thing. 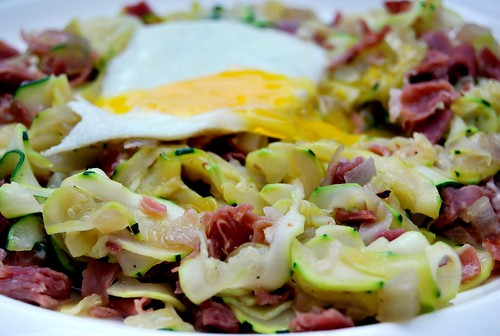 Now, of course, the spiralizer can be used for creating noodles with tons of other vegetables as well. Sweet potatoes and squash, for example. Even from fruit.

The contraption is made from sturdy plastic and doesn’t really take up that much counter space (and I conveniently shove it into a cabinet when I’m not using it). It comes with three different blades, so you can easily change the thickness of the cut.

The pieces are dishwasher safe, so it makes for an easy clean-up.

And really, who doesn’t want that?

Because we’re kind of turning vegetables on their ear, and they aren’t presented in the normal way they usually are, it has made it even easier to get the kids to warm up to some vegetables they didn’t like before.

They both hate zucchini.

Or so they say.

I just make a plate of zucchini noodles, topped with marinara sauce, or sometimes just garlic, butter, and Parmesan cheese, and they scarf them down.

Now hopefully you can’t wait to get your own spiralizer? And now you need even more ideas?

Then check out Ali’s website, Inspiralized, for more recipes than you’ll know what to do with. Everything from Apple Noodle & Rhubarb Crisps to Vegetable Cornmeal Fritters.

This Deconstructed Manicotti Skillet is next on my list.

Eat all the vegetables. ‘Nuff said.

*This was NOT a sponsored post. I’m just sharing something I love. The link to the Spiralizer up above *is* an affiliate link with Amazon, which just means should you buy your very own Spiralizer, I make a few pennies for more zucchini noodles. ;)