The inspiration to do a donut crawl came recently when I spied a write-up on one that was done in New York.

And really. When the topic is donuts, it’s not hard to get on board.

A date was picked. A kid-free Saturday afternoon. Research began. How to find places to include in our crawl? Yelp, information from Jersey’s own Munchmobile, and Google were my friends. There are a handful of really good donut shops down the shore, but for the purpose of our first donut crawl, I eliminated South Jersey completely, figuring that when the kids and I head down the shore over the summer, we can hit those up. And since some of those are “made to order” joints with very positive feedback, you can bet we won’t be missing them. We also excluded any shops that were near other places we planned to visit in the future. And I eliminated any that were in a bad area. Even if they were said to have the best jelly donut in the state. Because. You know. Safety first.

So all that research left us with 7 donut shops. Which seemed pretty perfect.

Because, a girl’s gotta have some limits.

Our first stop was Francesca’s, a cute little bakery in a strip mall in Pequannock. When I asked the shop keeper which donut was their number one seller, he responded, “The Boston Cream is pretty popular. And so is the chocolate frosted. And oh, the jelly too.” And we, of course, bought all three. And that’s when we knew we were in trouble. 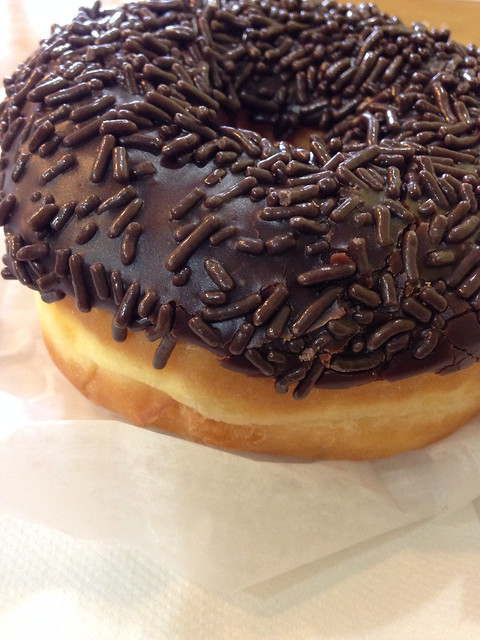 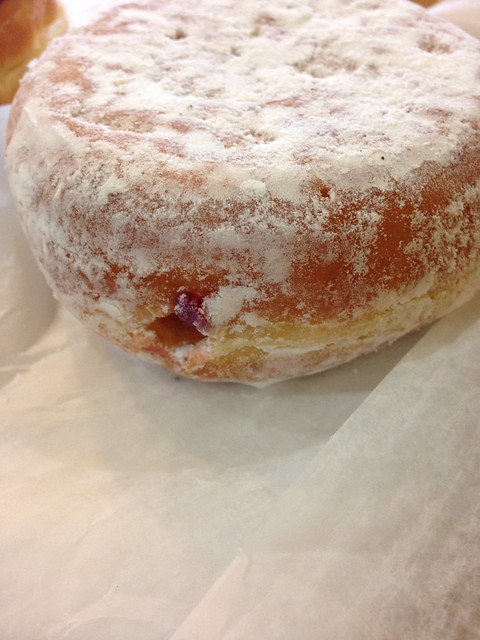 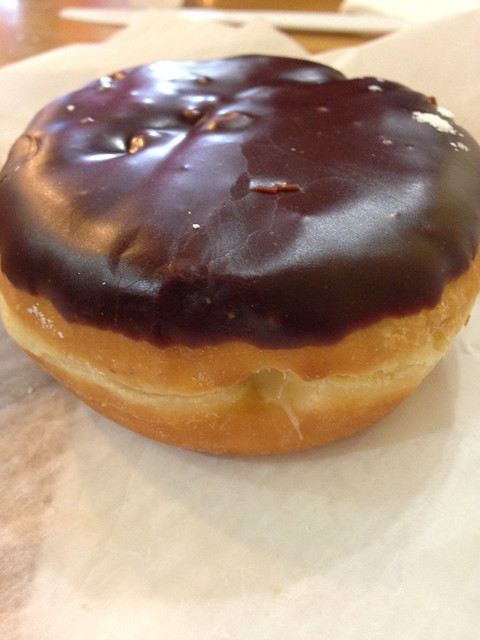 Because, realistically, a donut crawl is a pretty cheap endeavor, with most donuts at around a buck a piece.

Until we get swayed by many different kinds. And then get distracted by crumb cake and stuffed croissants and custard cups and sprinkle cookies and mouse shaped Madeleines and a million other things.

So we paid the nice man for our donuts and headed next door to the pizza place. We hadn’t had lunch yet, so we ordered a slice and sat down to devour the donuts. 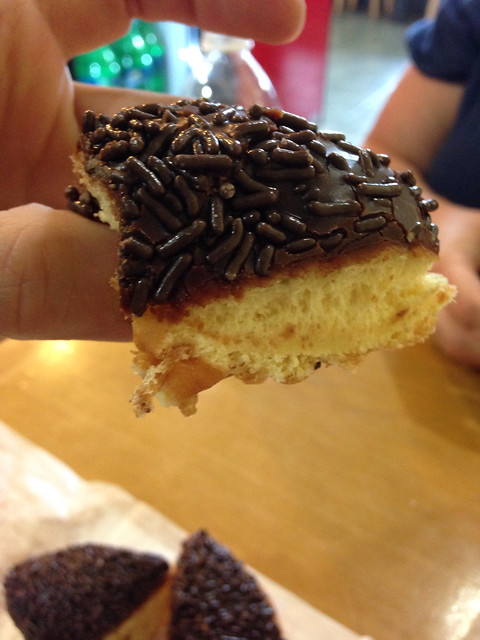 And I may have moaned slightly when I bit into the jelly. And momentarily wondered how we were going to fare for the rest of the afternoon. Because three donuts at the first stop… 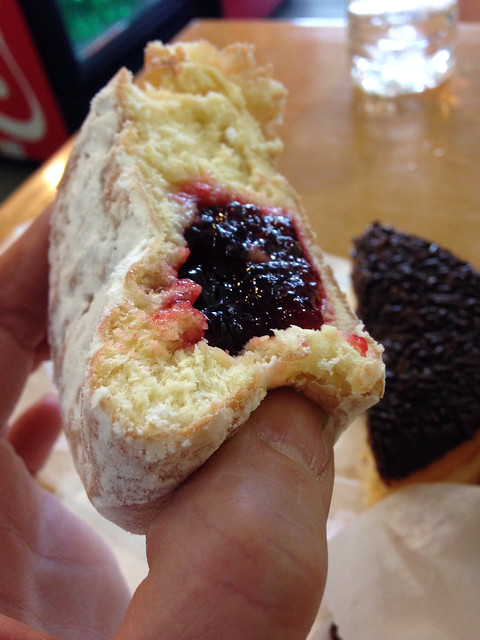 The donuts at Francesca’s were bigger than what you might find at Dunkin’ Donuts. Not greasy or fried tasting in the least. The chocolate frosting on the sprinkle donut and the Boston Cream was perfection. Sweet, but not too sweet. More like a ganache and less like a frosting. Just that perfect balance.

And this trio became the one to beat.

We quickly finished our pizza, grabbed water, and headed to Stop #2, the Packanack Bakery. Located a short distance away, the bakery is in a strip mall on a busy highway. 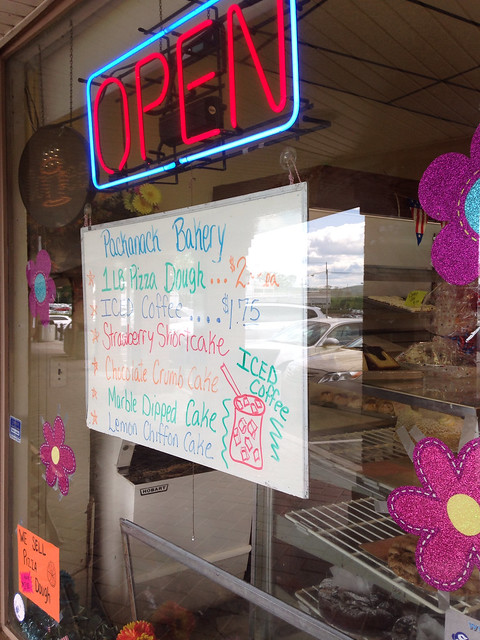 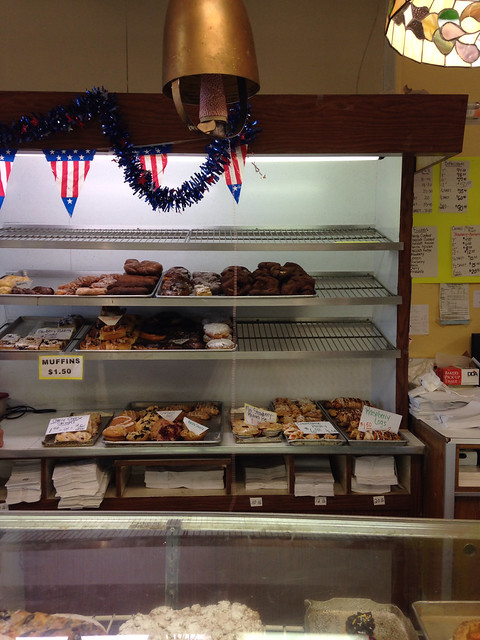 Their donut selection was very small, and some were incredibly overcooked (the kind that you would throw away and not sell to customers; they are pictured in the top right of that picture above). We ended up going with a cinnamon sugar donut and did some dashboard dining outside after making our purchase. It was small, chewy, and quite unremarkable. We didn’t go beyond a quarter piece each. 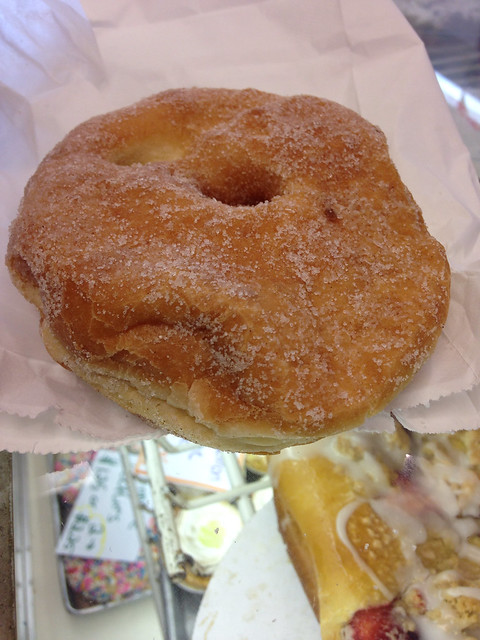 Calandra’s has several different locations and is known for their bread, first and foremost, which you can find in many local grocery stores. As soon as we walked in, a burned smell assaulted our senses. They had no donuts left, so we ended up going with a cinnamon sugar twist. All donuts are half price after 1 pm, so we lucked out, pay only 55 cents for the twist. Which was good since we threw it away after one bite. No ingesting calories that aren’t worth it became my motto of the day. It honestly tasted more like bread than a donut, which is totally what we think they should stick with.

Our fourth stop was Supreme Bakery in West Orange. We lucked out, finding a parking space right in front. A small bakery with a handful of tables inside. 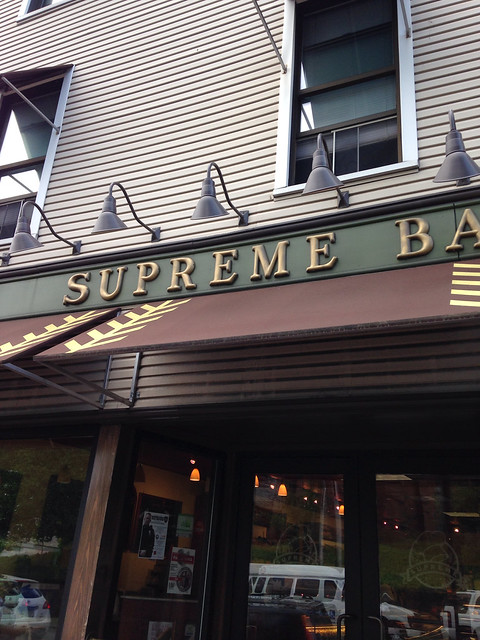 Donuts are $1.10 here, and the offerings were chocolate frosted, custard cream, and jelly. They have something called dossaints, which are a cross between a donut and a croissant. We went with the chocolate frosted here and it was okay. Not overly sweet, not a wow, still good but didn’t beat Francesca’s. 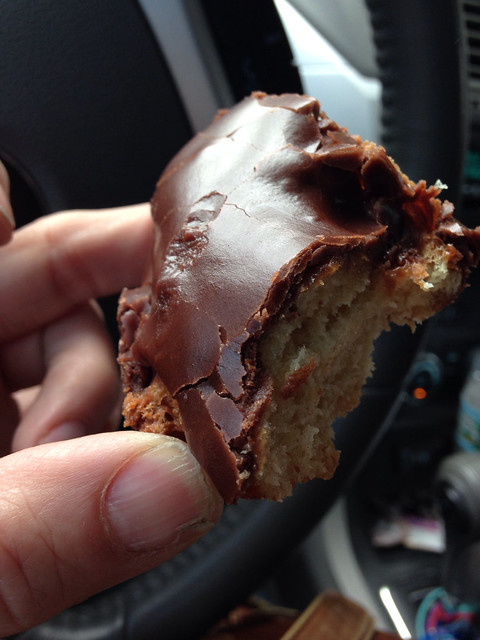 If you happen to stop in at Supreme, be sure to check out Thomas Edison’s Museum, just a short distance down the street. 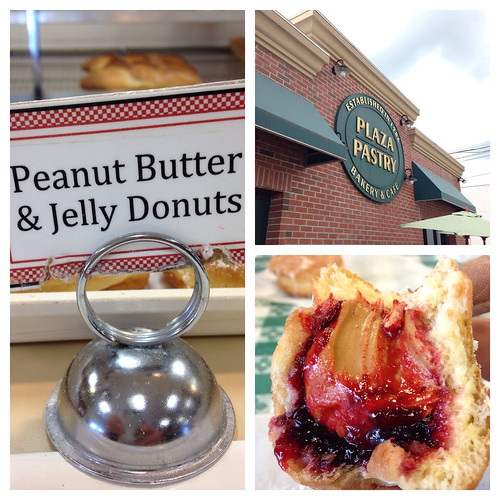 Stop #5 was Plaza Pastry in Nutley. And here is when it started to get more interesting. Finally, slightly different donut selections. While I wanted to make sure to try just regular donuts on our crawl, I also wanted some unusual flavors to throw into the mix. And Plaza Pastry helped with their Peanut Butter & Jelly donut.  I wanted to love it. It was well covered with the perfect amount of confectioners sugar, which I much prefer over the sugar covered jelly donuts, and the jelly inside was awesome. Full of flavor. Until you get to the peanut butter part. Way too much, so when you bit into that area, you just got a mouthful of peanut butter and found yourself searching for a drink. Love the idea, and love the jelly, just needs less peanut butter (and it was the heaviest donut ever). Plaza Pastry also had some empanadas, which were really tempting, but we were trying to keep our focus on the donuts. The glazed donut was delicious, with the glaze on just one side, inside of the entire thing being dipped, and that was perfect. 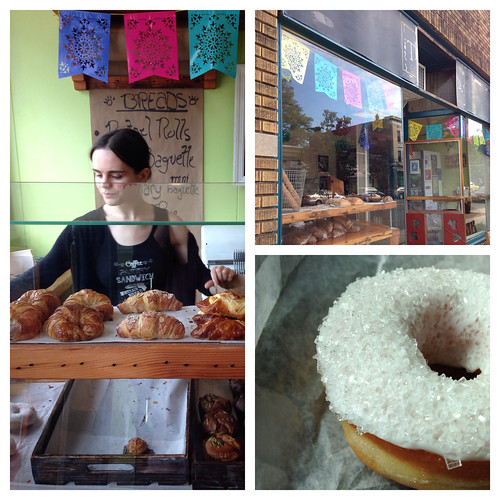 Stop #6 was the Montclair Bread Company in Montclair. Natch. This place was so cute, super small, and I would go back to it in a heartbeat. They only had one kind of donut available, but they were adorable. White frosted with glistening sugar crystals on the top. Easily the prettiest donut we had all afternoon. It was good, but the underside was a little oily, which was a turn off to me. I didn’t leave without getting some cute mouse Madeleines for the kids. Their sandwich selections sound delicious, and if we weren’t binging on donuts, I totally would have grabbed one. We did, however, pick up a spinach and cheese stuffed croissant, which was light, and flavorful, and the perfect foil to our sugar overload. 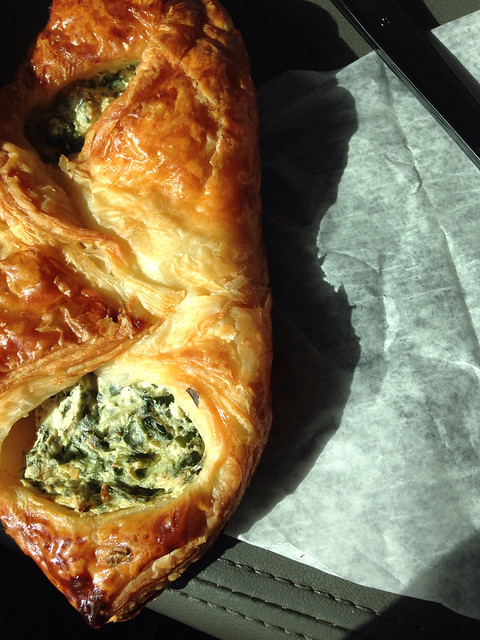 Our last stop, #7, was Gencarelli’s. Another spot that had some unusual donut selections – hurrah! 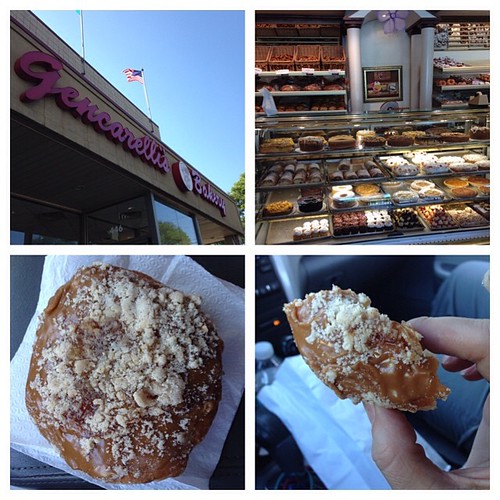 I had a really tough time choosing between the caramel apple donut and the nutella donut. Considering it was nearing the end of the day, they had a good variety of donuts left. I ended up going with the caramel apple. The caramel was, of course, very sweet, but oh so good and definitely the star of the show. While I liked the apple filling inside the donut, I would have liked it more if it wasn’t a canned filling.

The purpose of our donut crawl wasn’t necessarily to find the best donut of the Garden State, but more so to get a sampling of what our fine state has to offer. That being said, if I was craving the most delicious donut ever, I would go straight to the jelly donut at Francesca’s. It was that good.

Plans are already underway for our next food crawl adventure, but in the meantime, please do share YOUR favorite donut …!