A quick-to-table salad dish that combines sweet and savory ingredients, using the best the summer has to offer. 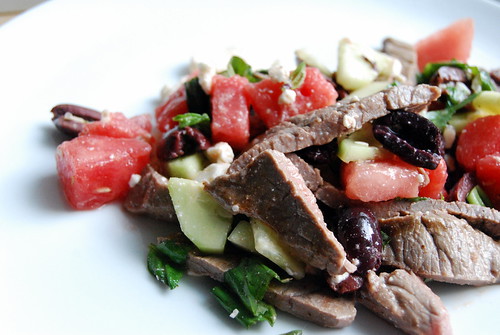 Many years ago, in 2008 to be exact, I was at my monthly Supper Club gathering with friends. Someone had brought a watermelon salad with feta and, I think, mint in it. There were probably about a dozen other dishes on the table that night and I tried everything. Except that watermelon salad.

I just couldn’t wrap my mind around combining watermelon with savory ingredients.

They say your taste buds change every seven years or so. And I tend to agree.

Because just the other day, I saw a recipe for tonight’s salad, combining watermelon with savory ingredients, and, for some reason, it caught my eye. I can’t even explain why. If nothing else, perhaps I was lured in by how easy the recipe is. Because in fifteen minutes, start to finish, you’re done. Barely heating up your kitchen. Totally not breaking a sweat. Which is pretty much perfect considering today’s high reached 97 degrees.

Jersey summers are no joke.

But whatever led me to make this recipe, I’m glad. Because it was delicious. I’ll be the first to admit. It’s an odd assortment of ingredients. Cold cubes of watermelon. Tangy bites from feta cheese and kalamata olives. Grilled strips of steak. And cool bits of crunchy cucumber. No real dressing except for a splash of lemon juice.

But. Somehow. Magically. It works.

To wit, my almost-twelve-year-old inhaled it and proclaimed it “the best ever.” I wasn’t expecting either of the kids to like it, but they both cleaned their plates.

An easy, delicious, healthy meal that I can table in 15 minutes?

Steak and Watermelon Salad With Olives, Feta, and Basil
Recipe by Christine Byrne from BuzzFeed
Serves 4

Procedure
1. Heat canola oil in a large cast iron skillet over high heat. Meanwhile, season skirt steak liberally with salt and pepper on both sides. When oil is extremely hot and about to smoke, lay the steak down in the middle of the skillet. Sear until a good crust begins to form on the underside of the steak, about 2 minutes. Flip steak and cook until a crust forms on the other side and the steak is cooked to medium rare (135°F), about 2 minutes. Transfer steak to a cutting board and let it rest for at least 10 minutes.

2. While the steak is resting, combine watermelon, cucumber, olives, feta, and basil in a large mixing bowl, season with salt a pepper, and toss to combine. Add the lime juice and zest, and toss to coat evenly.

3. When the steak has rested, cut it into thin slices, against the grain. Cut each slice into two to three pieces, so that the steak is in bite-sized squares.

4. To serve, divide the salad mixture among four plates, and top each with equal amounts of steak.