Consistently voted “Best Breakfast” and “Best Brunch” in New Jersey, and rightfully so, Shut Up and Eat, a kitschy restaurant in Toms River, New Jersey is well worth a visit. Just do it on an empty stomach. 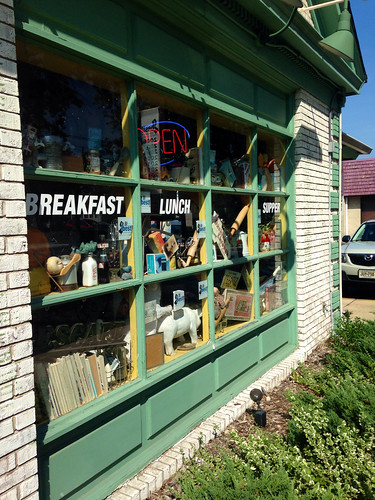 “You go in,” Madeline said, pushing her brother forward.

“No. YOU go in,” Nick said, trying to swap places with her.

Given the restaurant was called Shut Up and Eat, I understand their hesitation. I mean, really. We had no idea what to expect. 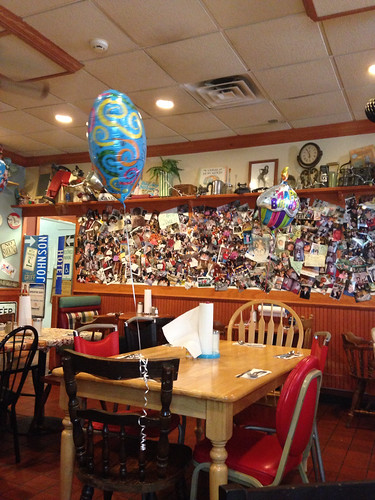 As soon as we opened the door, we were greeted with a rush of nostalgia. Or, ok, I was, since the kids probably didn’t recognize a lot of the old memorabilia that adorned the interior of the restaurant. There is a corner in the front that is a small area for kids to play with old-fashioned toys, a counter seating area and the most adorable 1950s style mismatched tables and chairs throughout. 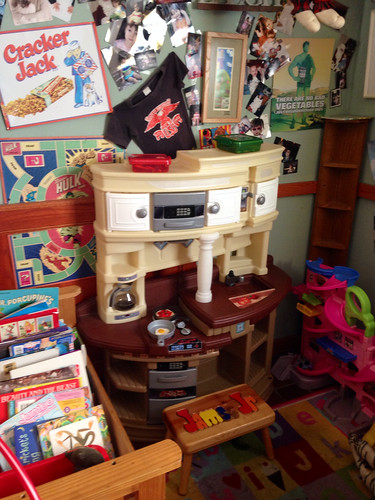 We were greeted with a friendly hello as soon as we walked in, and were led to a table in the back.

“You were here yesterday, weren’t you?” the employee asked.

His mom owns the restaurant and he was there the day before with his wife, setting up for the next day’s breakfast service. A google search of the restaurant shows them open through dinner time when, in fact, they aren’t (they close at 3:30 pm). If you wear pajamas (must be a set with a matching top and bottom), you get 13% off your tab, so we had arrived the evening before, in our pajamas, for dinner.

Now I can save you that embarrassment.

They’re only open for breakfast and lunch.

Despite what Google says. 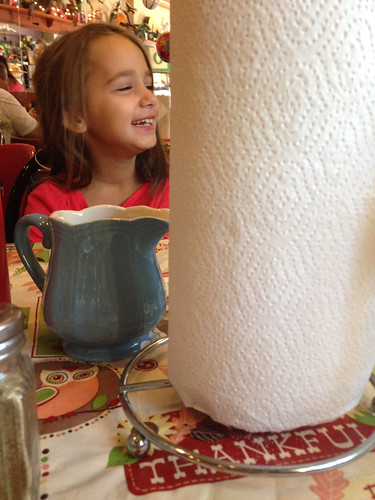 As he handed us the menus, he said he would give us some time to look it over. “It can be pretty overwhelming the first time.”

The menu is packed. Solid. Full. 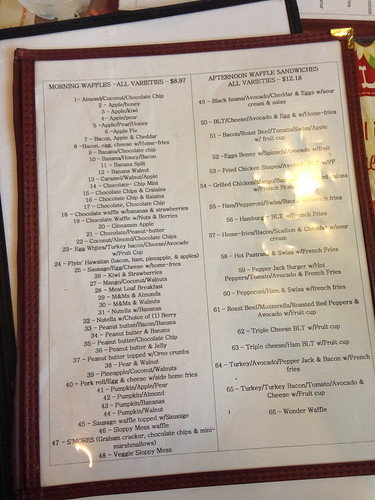 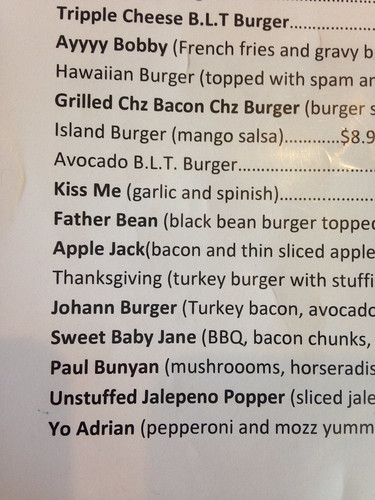 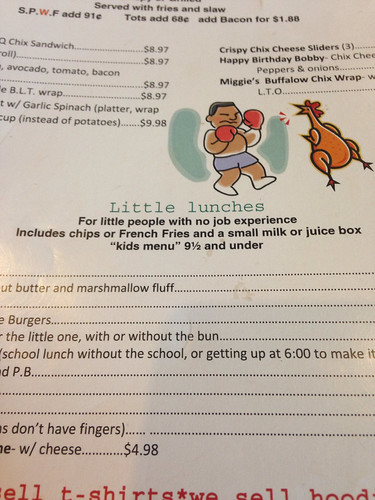 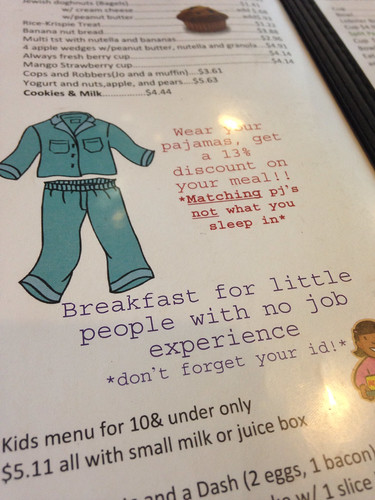 So many choices. Breakfast. Lunch. Side dishes. Whatever you could possibly want, I would hasten a guess that they have it on the menu. And my favorite part? So much Jersey goodness represented.

Grilled Banana Bread caught my eye and since we were hungry, I ordered that as something quick and easy to give us something to nibble on while we figured out what we wanted.

My favorite way to eat Banana Bread is lightly toasted with a slight smear of butter.

But grilled? OMG, even better.

So good that I actually ordered another round of it to take with us when we left.

And then, I spied that little walnut heart in the slice. 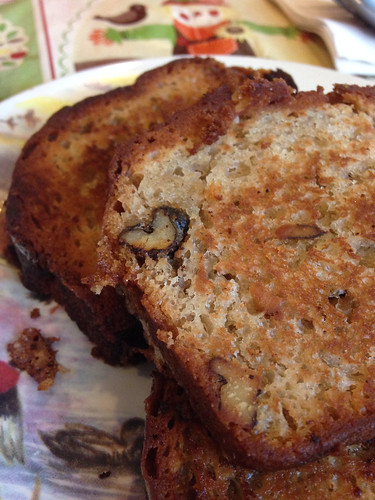 Nick ended up going with the French Toast with Strawberries and Bananas, and Madeline with Nutella Waffles. 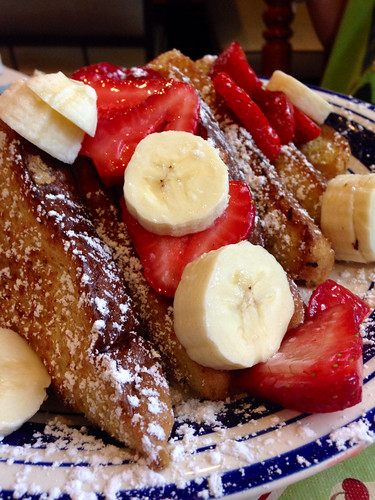 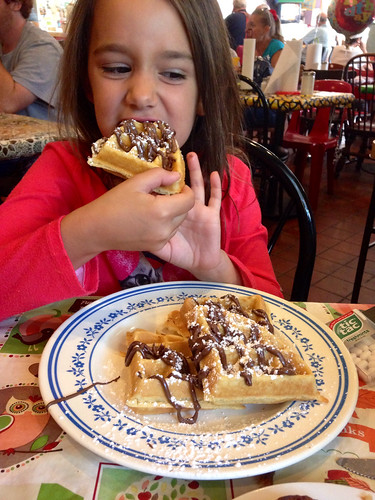 I really had a hard time deciding what I wanted, because everything sounded amazing and I really wanted one of everything.

But I ended up going with an omelet stuffed with avocado, mushrooms, and cheese (you can choose whatever you want inside), which comes with toast and hash browns. 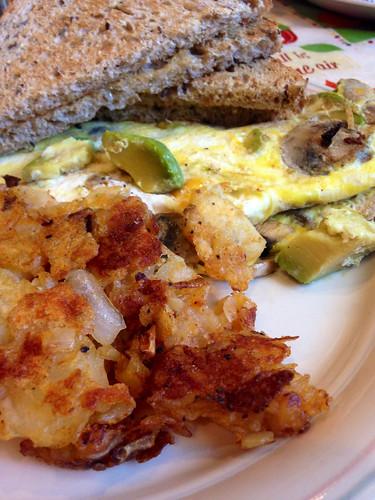 Generous portions all around (we ended up taking half of the kids’ dishes home with us) and everything was cooked perfectly. Every time our waiter came around, he playfully swatted Madeline’s head. When he saw Nick was leaving about half of his food, he shouted from across the restaurant, “You better clean that plate before you get yourself a whipping.” At which point he came over and asked Nick what the problem was and if playing the airplane game would help.

He picked up a piece of banana, a piece of strawberry, and a piece of French Toast with Nick’s fork and started zooming towards his mouth. “See, it’s easy. Open up!”

Although Nick was likely thoroughly embarrassed, I think he was also loving it.

There aren’t too many restaurants we love down the shore, but Shut Up and Eat is definitely one we’ll come back to. 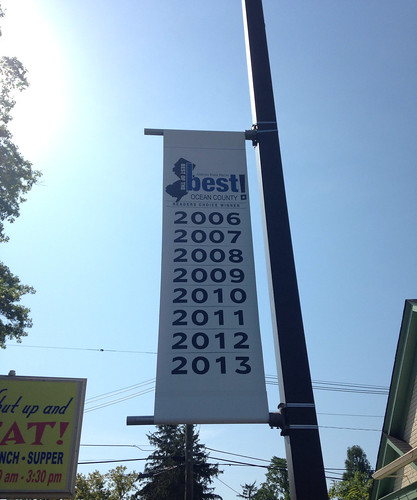 The restaurant has been at this location for two years, but in business for eight. The staff all wear pajamas and are a lively, friendly bunch, often sitting down at customers’ tables, chatting with them and sneaking bites of their food. Shut Up and Eat was included on the recent 20 Jersey Shore Food Experiences You Must Try Before You Die, and the Star-Ledger Munchmobile named it the Best Restaurant in Munchmobile History in 2010.