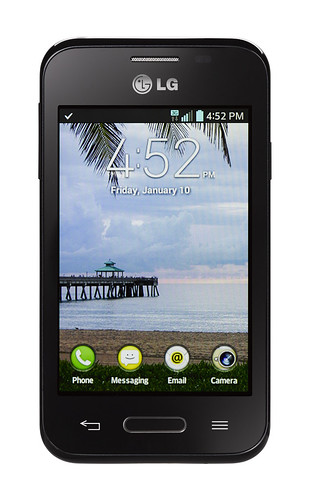 When I was in my early twenties, I had a pager. It was all the rage.

We had fancy little codes to say “I love you.” If someone paged you, you would have to then scrounge up some change and hunt for a payphone. When my kids saw a payphone a few years ago, they wondered what it was.

And then, a year or two later, I got my first cell phone. Still in my early twenties!

And these days? Well, the times, they are a changing.

Sample a group of 12-year-olds and see how many have their own cell phone.

Instant access to anyone and everything in the world.

Right in their back pocket.

And something like this is right for a million reasons.

While it means they can text their friends at any hour of the day, instead of the dread of having to pass through (gasp) the house phone and having a parent answer, it also means my son can text me when he needs to be picked up from somewhere. Or if there is a problem. It has saved us from a sticky situation more than once. But it’s also used for research while doing school projects. And as a learning tool.

I will be the first to admit that my son got his first cell phone far earlier than I had planned.

The Ex and I were separated, and Nick was going to Boy Scout summer camp for a week for the first time. And although he was with some kids from his troop, he was boarding a bus with many other troops that I didn’t know, and traveling some 45-minutes away.

And he would be gone from the early hours of the morning until the end of the day.

I put him on the bus that first day and then promptly freaked out.

What if the bus broke down?

What if they were hiking and got lost in the woods?

What if he got hurt and couldn’t find his counselor?

So many what ifs.

I spent my lunch time visiting the store to get him a pre-paid phone. And that was when it all began.

The few dollars I paid was worth every bit of the peace of mind it gave me. And since then, of course, his phone has changed over the years, technology has advanced, and despite my misgivings about him getting a phone so early, I don’t regret it one bit. I feel a million times better knowing that he is just a text or call away.

And I always smile when I see his picture on my phone when he’s calling. Unfortunately with the advancement of technology, also comes the need to continue to stay one step ahead of our children. Because with that access comes the great unknown. I monitor everything. I have his password and sporadically check his phone for downloads, text messages, web browsing, and the like.

There are ways to give your kids a little more access to the outside world, to let them still keep up with their peers, and still keep the reins tightly in your hand. Phones with pre-paid minutes are definitely one easy way. And parental controls are another.

TracFone Wireless recently released the LG Optimus Fuel™ Android™ Smartphone that has access to exclusive SpongeBob SquarePants content and the award-winning NQ Family Guardian™ App . Which means fun SpongeBob SquarePants games and apps for the kids, but that also means it has a parental control app for the parents. With this app, you can access information via an online dashboard so you can check on what your kids have been browsing online, who they have been texting, what pictures they have been taking, what apps they have downloaded or accessed… basically everything you want to know about their phone usage. Which means more peace of mind.

The LG Optimus Fuel™ smartphone is usually $79.99, but it’s on sale for only $29.99 at Walmart, Target & Kroger until the end of the year, and with that, you get a year of free parental control monitoring. Our rule is that as long as I’m paying the bill, I do random checks. My son is fine with that and if he wasn’t? It’s simple, no phone. And it’s not him that I worry about … it’s pretty much the rest of the world. Because as long as we have easier access to reach our kids, that also means strangers have that same access to our kids. And because of that, I am hyper vigilant. Always and forever, amen.

When and if you decide to give your kid their own cell phone is a personal decision, and beyond it being personal to each family, it’s really specific to each kid. You decide what they need when, and how much, and find the right phone and plan that fits you.

This content was sponsored by my partnership with The Motherhood. As always, all opinions expressed are completely my own. Thank you for supporting the brands that support this blog and my family.