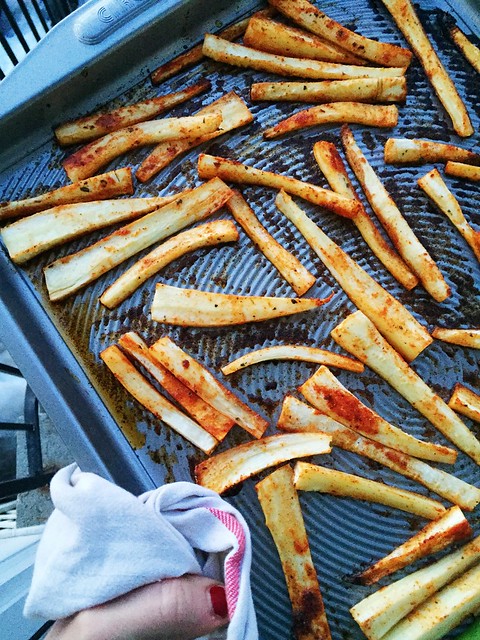 Last week, I was in HomeGoods looking for new bathroom towels, and ended up in the flour and oil aisle.

As I picked up a package of coconut flour (healthy stuff!), a woman nearby struck up a conversation. We chatted for fifteen minutes, and by the end, we had covered parsnip fries, almond flour, clean eating, and she had convinced me to make my own coconut flour.

I would say it was a pretty productive visit.

Especially since I found the aforementioned towels I went in search of.

I think I have only had parsnips once.

The only reason I remember such a random date is because my sister-in-law was over for dinner and I remember making a tray of roasted root vegetables, including parsnips and turnips.

And then The Ex and I got separated the month after.

So that first foray into parsnips stuck.

But clearly it didn’t stick enough for me to have them again.

Yeah, I don’t know what’s wrong with me either.

But after talking with the woman in HomeGoods last week (and we didn’t even discuss how to make them), I got parsnip fries on the brain and went searching for the parsnips this weekend. I tried to find them at the farmer’s market, but the vendor said they weren’t popular enough in this area (go figure!), but luckily I scored at my favorite grocery store.

The method to making this deliciousness could not be more simple, and it is completely forgiving. Use whatever herbs and spices you like to make a version that speaks to you. I happened to use Flavor God’s Pizza seasoning, but a million other spice and/or herb combinations would be equally awesome.

Parsnips (I used one bag of four, which was enough for me and the kids)
avocado oil (extra virgin light olive oil would work just as well)
seasoning

Preheat oven to 425. Trim off the ends of your parsnips and peel them using a vegetable peeler. Cut the parsnips into French fry sizes, making sure they are all uniform in size and shape so they bake evenly. Spread in an even layer on a baking sheet. Drizzle with the avocado oil and spices and use your hands to mix them up so they are evenly coated. Bake for 12 minutes, flip ‘em over, bake them for another 10 minutes. Just keep an eye on them so they don’t burn.

They are delicious as is, and they also tasted fab when dipped in this buffalo aioli sauce.