A new restaurant with Spanish Asian fusion street food and a casual vibe opened up nearby … one mention of Pork Belly Fries and I was there. 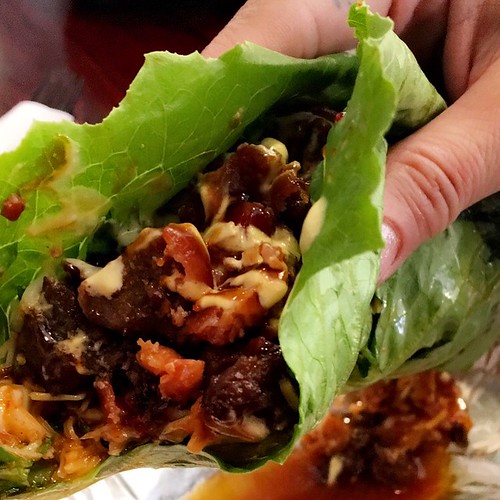 The kids are at this new stage in their life (read: growing up) where they can do fun things like offer to take me out for dinner for my birthday.

While them growing up is equal parts awesome and bittersweet, they’ll always be my babies.

When they let ME choose where we can go for a meal, I usually choose some place new and some place where they might possibly not like the food.

Because all the OTHER TIMES we go out, it’s to their favorite places.

If I can’t choose what I want on my birthday, there’s no hope!

A friend had mentioned a new restaurant, Taco Bao, had opened up nearby and that she and her family loved it. Once I heard her mention Pork Belly Fries, it was a done deal, so when the kids offered to treat me to dinner for my birthday at the end of the summer, I knew exactly where I wanted to go.

Being a good mom, I did scan the menu ahead of time, just to make sure they could find something they liked, because, after all, I wanted them to enjoy the meal just as much as I planned to.

Located in the quiet little suburb of Lake Hiawatha, the restaurant was easy to find, along with on-street parking. We grabbed a space right in front, but it was also a weeknight when we went, so on a busier weekend night, you might have to circle the block once or twice.

It’s a small, casual restaurant with just a few tables, and a steady take-out business. Any time you go to a new restaurant, the menu can be a little overwhelming, and this was no exception. The best way to alleviate that? Ask them what customers LOVE to order, and order that.

The style is sort of like Chipotle or Moe’s, where you customize your order with a few different choices. First you choose your base, then your main ingredient, and then your toppings, and then the sauce. Seriously, the sauce is always my favorite part – the messier, the better (except on date nights!).

I love Bulgogi, so when the owner suggested that, I was all in. I chose lettuce leaves as my base (wrong choice!), and instead of picking from all the different toppings and fillers (too many to choose from!), I went with the owner’s suggestion of the “chef’s special,” which was cheese, kimchi, bacon, Peruvian queso sauce, beets tobiko, and teriyaki sauce.

The only reason that lettuce was the wrong choice was because everything basically fell out and dripped all over. Which, in theory, is completely fine, but I think I just needed a slightly more stable base. The taste, however, was out of this world. Full-on flavor, and definitely a little bit of heat, but my mouth is watering just thinking about it again.

I’ve had Pork Belly Fries from a few other places over the last two years, and I love them, so I immediately added those to our order, hoping the kids would love them as much as I did. Spoiler alert: not so much. 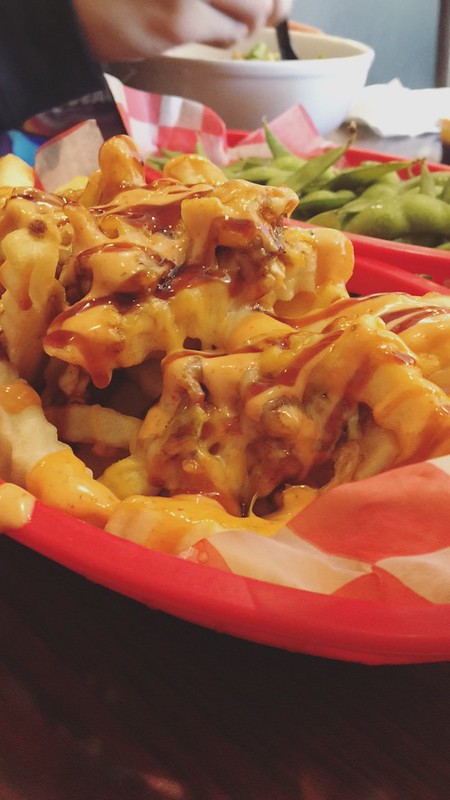 For her dinner, she went with a beef taco, and Nick chose a salad bowl. That kid LOVES his salad, and theirs was no exception. Unfortunately Madeline didn’t love the taco, but it wasn’t for lack of trying … it just had a little too much heat for her. She also ordered a side of edamame, and devoured the little suckers. 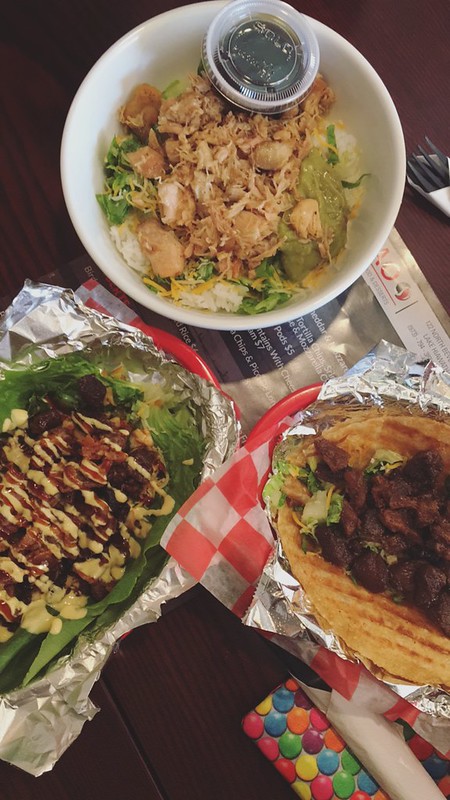 The service was friendly and efficient, and the food was ready in about ten minutes. The restaurant is very clean and has a slight industrial vibe in terms of decor. Besides the main entree items and side dishes, they have some pretty elaborate milkshakes and desserts available as well.

For the most part, the restaurant items are reasonably priced, but it tends to be a plus plus plus situation. Your entree doesn’t include a side item, so once you order an entree and a side for each member of your party, it can get really pricey really quickly, and I wouldn’t say the entrees are super filling, but, of course, that depends a bit on what you order. We split two sides, and that was enough for three of us to share, but if each person gets an entree, side, and a drink, you’re looking at about $17 per person, which, for a mostly casual restaurant, well, that’s a little on the high side. I think our bill was around $40 for three entrees, two small sides, and three bottles of water. Not the worst, but not the most economical.

I talked to the owner for a few minutes when we were done. He opened the place up in the Spring, and has said that business has been slowly growing, and he was happy. He’s young, maybe mid-20s (?) and eager; I give him a lot of credit. I have a few friends who have (or had) restaurants, and it’s always been my dream … but the schedule and demands are brutal.

If you’re looking for a fun new place to check out for a delicious meal, give Taco Bao a try. I’ll definitely go back, just maybe with friends instead.