Join me for today’s episode of “Moms Play Hooky,” as we ventured into the city to attend a taping of the Rachael Ray show. 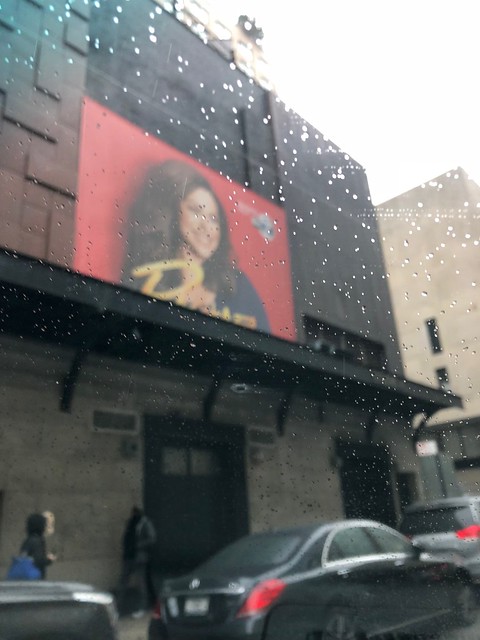 To say I requested tickets for a taping of the Rachael Ray show a long time ago would be an understatement. Like, if I’m not mistaken, I originally requested them some 13 years ago!

And the moment finally arrived. I received an email in early April saying that my request had finally been approved, and they gave me two dates to choose from, and I could have up to four tickets. I picked a date, found some accomplices, got the kids off to school, and headed into the city.

The studio is super simple to find, and with rush hour traffic, it took us about an hour and a half to get there. There is a parking garage on the same street that is not outrageously overpriced, and I parked there to save the loops around the city blocks trying to find street parking. One of my friends was already in line, a line that stretched about half a city block.

The email states that while you have tickets, your entrance is not guaranteed. We missed getting into the show by about ten people, which was a total bummer. But the people in front of us in line, who also didn’t get in, had actually flown in the day before, just to attend the taping … that they now couldn’t get into either. So, perspective.

The good news about getting turned away in line, is that they give you an email address that you can email to request tickets again, and since you didn’t get it in on the first attempt, this next round is guaranteed. The coordinator emailed me back within a day with two dates and two different times to choose from, so that worked out nicely. Since we already were in the city, we took off for some adventuring, and returned back two weeks later for our taping.

Parked the car again, and walked to the studio. This time I approached the coordinator, and because we had guaranteed seating, we were ushered right in.

We had to sign a disclosure, and go through a security checkpoint, and then we waited in a holding room for about half an hour. Good time for a bathroom break! When we first got there, there were only about 20 people in the room; by the time we were done, it was standing room only. Rachael’s audience warm-up guy, Joey Kola, came out to get everyone hyped to attend the taping, and go over some ground rules. Interestingly enough, I’ve only gone to one other taping (Martha Stewart a million years ago), and when I went to go look up the link for that one, it turns out that it was the same warm-up guy.

The biggest rule (and contradictory to Martha Stewart) was that you couldn’t use your phone. It had to be completely turned off the entire time we were in the studio. If you were caught by security, you were escorted out. And that practically killed me. Partially because I wanted to take a picture to document our day and partially because if my kids aren’t with me, I don’t want to be completely cut off like that. But I followed the rules, and luckily no emergencies. 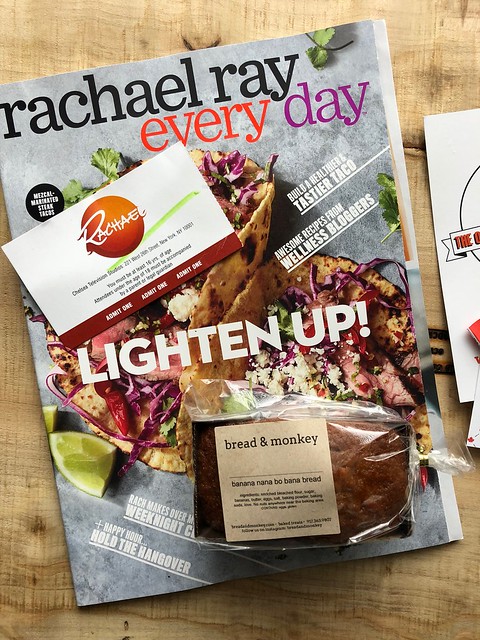 *taken once we got out of the studio

The taping we attended was in celebration of National Foodie Day, so it aired last week. The guests were Emeril Lagasse, Daphne and Lisa Oz, and Jason Scott. Since it was National Foodie Day, the show also did something different. They had six different food vendors in the studio from Smorgasburg (a market in Brooklyn’s Williamsburg), and during our time there, Rachael and Emeril talked to each vendor, briefly shared their story, and we were allowed to go down to the floor and sample all the food. Rachael made a point of saying that they only do something like this, with an abundance of food for the audience, every six months or so, so we were very lucky!

Of the vendors that were there, I tried everything, but really loved the spring rolls from Roll Play Viet Nom, and the Butter Tarts from B Tarts (like pecan pie without the nuts and so amazingly buttery and smooth). I very carefully saved the banana bread from Bread & Monkey and the sticky buns from Big Buns to take home and share with the kids (and so I could get at least ONE picture from our day). I shared the Banana Bread with Nick, but found it very dry, and unfortunately our dog stole the sticky bun when I walked down to get Maddie off the bus, so only he knows how it tasted, but it looked amazing. (You can watch a clip with the foodie vendor portion here).

During most of the taping, Rachael stayed engaged with her crew and Emeril and was really working; she didn’t talk to the audience too much. Once in the middle for 2-3 minutes, and a quick thank you at the end. I’m sure with at least two tapings a day, it’s a whirlwind of jam-packed activity, but I wish they could carve out 5-10 minutes for a quick Q&A with the audience at the end.

Daphne and Lisa Oz made two recipes from each of their new cookbooks (Daphne’s can be found here, and Lisa’s here … both women and their recipes looked amazing, btw!), and Rachael and Emeril made two recipes, and then Jason made two as well. It was a pretty full taping! You can find all the recipes right here, and you can watch the whole episode here. 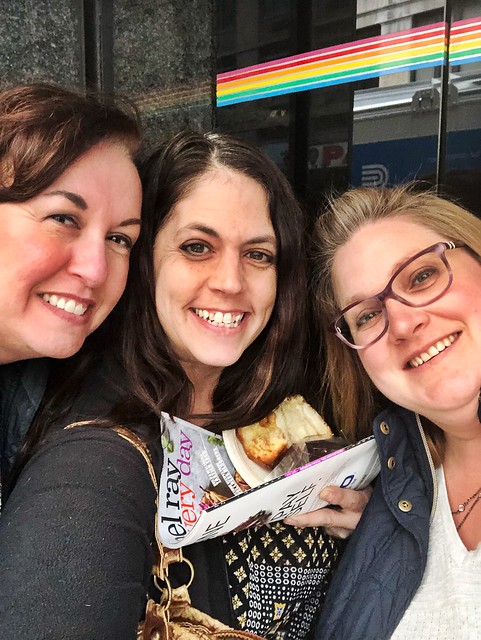 All in all, it was a fun way to spend the day. We left with a copy of her magazine, and full bellies, and got home in time to get the kids off the bus.