You don’t have to give up ALL your favorite foods when you’re on Whole30, you might just need to tweak a few. Like these Buffalo Chicken Meatballs. 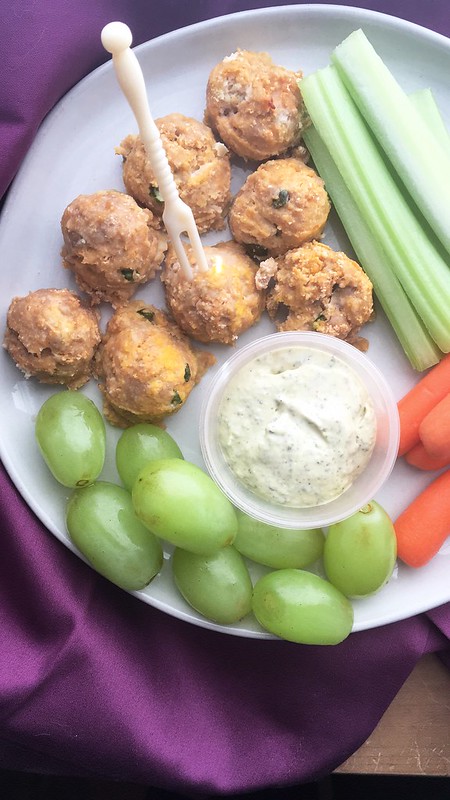 If you follow me on Instagram (cateomalley), you might have noticed I’m doing another round of Whole30. This is the third time I’m doing it, and it’s a little bit different this time. Because there are about 40 of my friends doing it too, so we’re all in a private facebook group posting recipes, sharing grocery store finds, and cheering each other on. Doing it with others makes such a big difference. We’re all holding each other accountable, supporting each other, and commiserating as we pass up our favorite non-compliant beverages. #teamwork

When I was married, my (then) husband was all about buffalo wings. And me? Well, wings didn’t do anything for me, nor the “buffalo” flavoring either. Flash forward a few years, and, well, I’m all about buffalo anything. This is dip is a favorite time of ours, and I even have two Pinterest boards dedicated to buffalo-themed recipes, one specifically chicken, and one not.

So when I spied a recipe for Buffalo Chicken Meatballs, you know I was going to make it. Sooooo simple to throw together. Mix a few basic ingredients in a bowl, use a mini cookie scooper to form your meatballs, bake, and devour.

And devour I did.

Nick didn’t love them – the texture of ground chicken threw him off a bit. But that just left some for me for lunch the next day. I used coconut flour instead of almond, because I happened to have it on hand (and you can’t taste the coconut), and I used Primal Kitchen’s chipotle lime mayo for dipping (a Whole30 compliant ranch would be good as well (and I used that for the next day). I think the next time I make them, I would mix a little ghee and hot sauce and slather them with it after baking. I did miss my usual bleu cheese, but for now, this will do the trick.

Whether you’re on Whole30, or just want a healthier version of an old favorite, dig into these.

END_OF_DOCUMENT_TOKEN_TO_BE_REPLACED

A quick and easy salad that packs a flavor punch with hot sauce and bleu cheese. Let’s dig in. I used to have a complete and total aversion to anything “buffalo” and, really, hot sauce in general.

But then Nick started taking a serious liking to buffalo wings a few years back, and in making them for him, my tastes have changed.

Most likely because any time you have buffalo anything, bleu cheese is never far behind, and it’s one of my favorites of the strong cheeses.

And now hot sauce is pretty much on the regular when it comes to our menu.

Allow me to introduce you to Baked Buffalo Chicken Salad.

Although it hardly qualifies as a “recipe,” per se. It’s more of a guideline.

And what that really means is that it’s so crazy simple to make, you will always remember it after today.

No need to write anything down. Or remember ingredients or measurements.

You just go and do.

Let’s get this started.

END_OF_DOCUMENT_TOKEN_TO_BE_REPLACED When it comes to the “buffalo chicken” flavor, I am admittedly a late adopter. The Ex loved buffalo wings. Well, any kind of wings, really. It’s like guy code or something. And Nick started liking buffalo chicken anything a few years ago.

So basically, if you can’t beat them, join ’em.

When I was trying to figure out what I was making for our recent Girls Night In party, I knew that our current potluck offerings were heavy on the sweet side (not that that’s a bad thing, of course), so I concentrated on finding something savory to balance it out a bit. And I turned to the easiest source of inspiration.

Namely my Appetizers board, because I wanted finger food. I pinned this recipe for Baked Buffalo Chicken Bites ages ago. Simple, easy to find ingredients, the buffalo chicken flavor profile that everyone likes, and baked (so healthier).

I did give pause when I saw the directions, because it was a bit fiddly and time consuming for a last minute addition to a party menu. Particularly when I don’t want to be stucking dredging chicken bites in flour, egg, and crumbs when everyone is arriving. I’d much rather be drinking Mom Juice.

And as I was in the kitchen dredging while everyone was filtering in, I swore I probably wouldn’t make these again.

Because of the dredging.

But that’s probably not true.

They have the heat of buffalo chicken, are perfectly bite size, and a bit healthier because they’re baked.

And the first platter I put out was gone within minutes.

And really, in the grand scheme of things, they took all of thirty minutes to make. So whining aside, they’re worth making.

Good for a little bite when you have friends over. An appetizers-only party. Tailgating. A cozy night in when you just want to have finger food and pop in a movie. Whenever.

Make ’em. Dredge them. And all will be good.

END_OF_DOCUMENT_TOKEN_TO_BE_REPLACED When it comes to Buffalo Chicken pizza, Nick and I are all in. Whenever we’re trying out a new pizza place, we usually get a slice of it so we can see how it stands up to others we’ve tried, but with my latest assignment for the folks at Pillsbury, I thought it was high time we try and make it ourselves.

Nick inhaled his and asked for a second slice as he was heading out the door for the weekend. The Ex gave his approval. And man, oh man, this might be my newest favorite homemade pizza.

I will do my best to save the rest for Nick when he and his sister come home on Sunday.

But I make no promises.

In the meantime, if you’re a buffalo chicken fan, or like things with a little bit of a kick.

Sliced in thin strips, pizzette-style, it’s the perfect little game-day appetizer. And given it’s so quick to make, it’s a great weeknight meal, and I promise it beats anything you can get from your local pizza joint. Hungry for more homemade pizza recipes?
This Bacon Cheeseburger Pizza recipe is definitely my second favorite. That cheesy base gets me every time.
This Brown Sugared Pear Sweet Pizza is a delicious dessert. Light, simple, and unexpected.
Double Delicious Pizza is perfect for your favorite meat lovers.