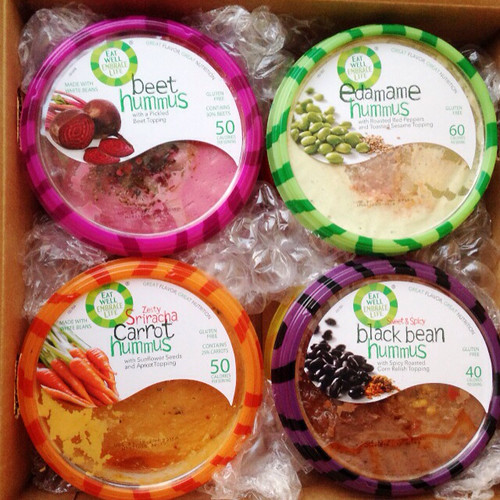 Is it possible for hummus to change your life?

Or at the very least … for it to change the way you think about hummus.

And such was the case with this delicious delivery I received a few months back.

I am partial to homemade hummus, so the fact that there were completely differently flavors available, instead of spins on an old favorite, was a step in the right direction.

The folks at Eat Well, Embrace Life kindly sent me a box for taste tasting, which I promptly brought to the office to get extra opinions on. And share, of course.

I’m going to start with my favorites.

Edamame Hummus with Roasted Red Peppers. I love edamame, so I knew I would love this from the start. It is smooth, creamy, and has such a light taste that I couldn’t help go back for more, again and again. And it was the office favorite as well, and the first one demolished.

Spicy Yellow Lentil Hummus. This one was slightly sweet with a subtle kick towards the end. It is topped with crunchy little bits of sunflower seeds and chewy pieces of apricot. Simply awesome….

END_OF_DOCUMENT_TOKEN_TO_BE_REPLACED When I came home last Sunday with our monster-sized haul of fruits and vegetables, I thought it would be fun to do a week’s worth of vegetarian lunches.  I started the week off with this favorite tried-and-true recipe for Warm Butternut Squash and Chickpea Salad, and a few roasted vegetable sandwiches, and when I saw this recipe from Two Peas and Their Pod recently on Pinterest, the Smashed Chickpea and Avocado Salad Sandwich, it was the perfect finish.

Truth be told, avocado and I are closerthanthis.  On any given day, we have several on our kitchen counter, in smattering degrees of ripeness.  My 9-year-old son, Nick, and I will have one or two with dinner, or I’ll have one in various sandwich incarnations.  He likes an avocado drizzled with a little bit of olive oil, hot sauce, and kosher salt.  I do too.  It’s an awesome way to bring out the full, buttery, creamy rich flavor of the avocado.

This Smashed Chickpea and Avocado Salad Sandwich became my lunch on Thursday.  I almost skipped the “shell the chickpea” step.  I mean, really, I can honestly say I have never thought of shelling chickpeas when I’ve used them before, but to try the dish in its original form the first time, I shelled.all.the.chickpeas.  Each and every one.  Man, super tedious work.  A task I should have put one of my little helpers to, but luckily for them, they were outside enjoying a few moments of (rare) sunshine.

END_OF_DOCUMENT_TOKEN_TO_BE_REPLACED You know my favorite indication that a recipe is a keeper?

When you can’t wait to have the leftovers the next day.

Which is quickly followed by when someone asks for the recipe.

Or when there ARE no leftovers, so you have to make it again.

Right after just making it.

This is that recipe.

This week, I’ve been on a vegetable kick.  I cannot wait for the farmer’s markets to reopen.  Roasted.  Braised.  Sauteed.  However they’ve been made, it’s been vegetables after more vegetables lately.  Augmented by with salads and fruit for good measure.

It may or may not have something to do with Nick’s declaration that he wanted to give up meat for Lent.

For the record, I said no.

He can eat less, no problem, but until he starts eating fish or opens up his palate to more vegetables, he can’t just give up meat.

So back to my new favorite dish.

END_OF_DOCUMENT_TOKEN_TO_BE_REPLACED END_OF_DOCUMENT_TOKEN_TO_BE_REPLACED

I was one of the bloggers selected by T. Marzetti Company and Clever Girls Collective to host a Marzetti Otria Greek Yogurt Veggie Dip review. They provided me with product to test and compensation for my time. However, my opinions are entirely my own.  But you knew that already, right?

When it comes to the kids eating vegetables, regular readers know that I am not a fan of hiding them a la Jessica Seinfeld. I just feel that if they have half a shot of liking a vegetable, they have to be introduced to it properly, and honestly, not by way of sneaky methods. If they like it, great. I then find more ways to cook and serve the vegetables they like. If they don’t like a vegetable, we move on. I usually circle back after some months because we all know that taste buds change. Heck, it took me nearly forty years to learn to like salmon!

One of the easiest way to get veggies in their little tummies is by using veggies as a dipper. Nick loves hummus, and will dip carrots and celery into it with reckless abandon.  Well as much reckless abandon as a nine-year-old can muster.  Sometimes green pepper strips. And always cucumbers. It’s a perfect snack for him to take to school. Madeline (and believe it or not, the dog!) love carrots. She’ll also eat cucumbers. They both eat salad without any prompting from me.  When time permits, I make a homemade buttermilk dressing, because she doesn’t care for hummus. And when time is super tight, I also sometimes use this Greek Yogurt Veggie Dip (the ranch version) at Marzetti – perfect to stuff in her little pink lunchbox. Since I typically don’t use disposable bags for the kids’ lunchboxes, I pack up the veggies, dips, fruit, and what have you in these snap-and-lock containers (love them!).  They have a tight enough seal that nothing seeps out, but are easy for Madeline’s little fingers to maneuver.  She is also pretty partial to these cute containers, which are great because they have a divider.  And I’m partial to saving money on Ziploc bags.

The Marzetti dips are nice and creamy, and the tang from the Greek yogurt is light enough that it’s not a tough sell on the kids.  And since I use Greek yogurt a lot as marinades and in homemade dips, they’re used to it anyway.  I don’t have guilt about what they’re eating. They get the vegetables they desperately need. Everyone is happy, happy, happy.  And that is just the way I like it.

PS – I snuck in a little bonus post on yesterday’s schedule – did you catch it?  Go read, and then watch the short video, and tell me you’re not happy.  Just a little bit. As I was packing up the kids’ snacks and lunch this morning, Nick stopped me.

“Wait, I need pretzels and hummus for school!”

I love that he loves hummus.  And I’m certainly addicted to it myself.  Especially lately.  Clean eating.  Healthy.  And delicious.  It’s the perfect mid-day, tide-you-over-till-lunch bite.  And with our recent reboot of Eat.Live.Be., this is a perfect guilt-free snack to take the edge off, and it seriously whips up in five minutes flat. If you’re playing along, tomorrow’s Eat.Live.Be. will take its inspiration from somewhere online.

It turns out that Mystic is not a fan of hummus.  Or chick peas.  Or apparently beans of most any kind.  Couldn’t even get him to try it, and he’ll usually try anything.  I haven’t given up yet, but in the meantime, it’s most definitely his loss.  Adding to his list…

I brought some in to work last week and asked one of my new co-workers if she wanted some.

“Hey now, do you think I would make something gross?  Come on now.”