The richest, most delicious cheese sauce accompanies cavatappi noodles in this delicious mac and cheese. 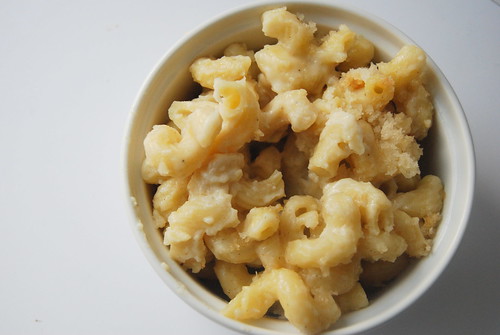 I hadn’t planned to have a Super Bowl party.

But we accidentally did.

It started with Nick asking to have a friend over.

And then I didn’t want Madeline to feel left out, so she invited her besties.

And then one more.

But it was awesome.

Because I could spend the afternoon cooking a random array of delicious food and the game was punctuated by fits of giggles and rounds of Truth or Dare.

HOW DO SIX YEAR OLDS EVEN KNOW ABOUT TRUTH OR DARE?

I have no idea.

But luckily my eavesdropping revealed that it’s a pretty clean-cut version.

END_OF_DOCUMENT_TOKEN_TO_BE_REPLACED

“What are you doing?” I asked Mystic after watching him for a few minutes.

Taking the onions out of Nick’s sandwich.

This was totally news to me, and I’ve known the kid for 9 years.  I know he doesn’t like the smell of onions, and usually vacates the premises as quickly as possible when they’re cooking, but he’s never said he didn’t like the taste, and I’ve never noticed him pick them out of a meal.

But darn it if Mystic wasn’t right.  Confirmed by the fact that I watched Nick carefully remove the little onion pieces from tonight’s dinner.  Mystic is crazy observant.  I thought I was, but he has me beat.

The first time Mystic cooked for me at his house, I was keeping him company in the kitchen while he finished plating the food.  He stopped for a minute to rummage around in a drawer and handed me a little light bulb.

Your ice maker light is out.

“I have a light for my ice maker?” So tonight’s dinner had onions.  And broccoli.  In a healthified version of macaroni and cheese, courtesy of Skinny Taste.  The broccoli cooks in the pasta pot, making it very soft when it’s done and super tiny.  While I’m not hiding vegetables in this dish (I personally abhor that concept), they’re still visible.  The kids did notice the broccoli, and I explained that if they took a bite of the broccoli with the pasta, they wouldn’t even be able to tell they were eating it.  Most of the broccoli cooks down to smithereens, so they’re really getting plenty of broccoli in every bite.  Two heads of broccoli went into this dish.  Nick said it was good, and Madeline tried to pick out the broccoli, then we negotiated a bit, then I fed her, and she ended up cleaning her whole plate.

While this is not the end-all-and-be-all, stop the presses recipe for mac and cheese, it’s a creamy casserole type version that you can serve your family and skip the guilt.  Because the cheese is low-fat, it’s not going to have the sharp punch of a traditional Cheddar, but it’s easy to make, tasty, and if it gets some extra broccoli in their little bellies, I’m there.

For those following Weight Watchers, this one clocks in at 8 points per one cup serving….

END_OF_DOCUMENT_TOKEN_TO_BE_REPLACED There is a reason there are a million and one recipes for macaroni and cheese.  Total.comfort. food.  Anything that can warm you from the inside out is worth putting into your rotation.  Just sayin’.  Of course all the cheesy goodness comes with a price.  It might mean an extra Zumba class at the gym or another 30 minutes on the treadmill, but surely the ends justifies the means, right?

When it comes to macaroni and cheese, Nick tends to be a blue box kind of kid.  He will eat a few bites of the other homemade versions that I make, but he really prefers Kraft or Velveeta.  He’s entitled.  Madeline will eat any kind.  That is, when she stops long enough to actually put food in her mouth.  When I saw The Pioneer Woman had her own version of macaroni and cheese, I added it to my to-try list.  I made this one back in February after one of the umpteen times that we got hit with a crazy amount of snow.  Can you tell I’m a bit behind in sharing recipes with you? Even while taking pictures of the kids in the snow and doing laundry, the macaroni and cheese was simple to make and uses basic ingredients you just might have on hand.  The taste?  This is a good standard mac and cheese recipe.  Not OMG, but basic goodness.  And the real test?  Nick came back for seconds.  Winner winner, mac and cheese dinner. “Do you want the Dora seat?”  No.  “The Princess one?”  No.  “How about Elmo?”  No, Mommy.  Clearly she was getting exasperated with me.  “Which one do you want?”  Go Diego!  Diego it was.  We have successfully entered Day Four of Diaper-Free, Accident Free Territory.  Whoo-hoo.  I used the same boot camp method I came up with when training Nick (was it really that long ago?!) and though Madeline is much younger than he was, it worked like a charm.  Really should patent the O’Malley Method.  ;)  Forget Go Diego … go Maddie!

END_OF_DOCUMENT_TOKEN_TO_BE_REPLACED I feel like I am on a lifelong search for THE macaroni and cheese recipe.  The one to stop the searches.  And on that journey, I’ve tried a number of recipes that, while good, haven’t been the one.  Nick, on the other hand, is strictly a blue box kid and has zero interest in my lifelong quest and the all versions the journey entails trying.  I am really trying to find a match for a macaroni and cheese that my sister and I grew up eating from a local restaurant.  Wait.  That sounds like our mom never cooked us dinner.  She did.  All the time.  You know what I mean.

That mac and cheese that I long to replicate was your very traditional kind with the nice crust on top.  Nothing fancy, just downhome comfort food.  This version I’m going to introduce you to is a kicked-up adult version if you will.  They are not interchangeable.  They each serve their own purpose.

I’m a big fan of Food Network’s Ultimate Recipe Showdown, where home cooks like you and me compete with their original recipe to win the top prize of $25,000.  Besides a nice hunk of cha-ching, the winning recipe also appears on T.G.I Friday’s menus very soon after their win.

When I saw the episode on comfort dishes, I was rapt with attention.  Especially when I saw a recipe for a mac and cheese.  The end result looked so good that win or lose, I was going to make it.  Rick Massa, the creator of the recipe, was quite a fun guy.  A former LAPD SWAT team member, once he retired, he started cooking.  While he was making the dish, the judges worried about all the cheeses, particularly the strong Maytag Blue that he used.  Rick himself worried about finishing up a little early during the competition (you can catch a little video from the episode here).  Well, it turns out that nobody needed to worry, as Rick’s dish took top honors.

Weeks later, I headed down to T.G.I Friday’s to try it out and it was love at first bite.  When the restaurant gets ahold of the winning recipe, they sometimes do a little tweaking, and their version includes a grilled chicken breast.  For $5.99.  The entire dish for $5.99.  Such a great little bargain.  I order that, I give Madeline half of the chicken for her dinner, and the remaining chicken and pasta is enough for my dinner and lunch the next day.  All for under $6!

So I’ve fallen into a rut and every time we go to T.G.I. Friday’s, I order the pasta.  But this past weekend, I finally got the chance to actually make it myself and it did not disappoint.  Just pulling it out of the oven and seeing all the little bubbles of cheesy goodness was enough to let you know you’re in for a good time.  Now after tasting both versions, I think the restaurant’s rendition is also a touch creamier and might have a little more blue cheese than the original version, but both are good.  You just might moan at first bite.  Creamy from all the cheese, with sharp pockets of bite when you hit the blue cheese, this is comfort food at its best.

Whether you go have it at the restaurant, or in your very own kitchen, you won’t be disappointed.  A wonderful adult version of mac and cheese….