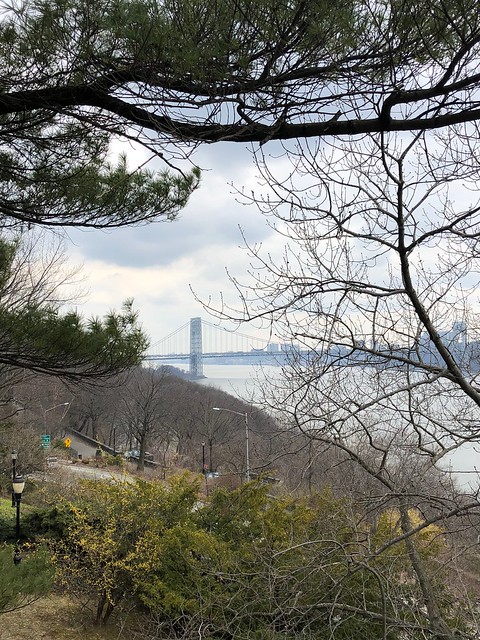 When we were shut out of our first attempt to attend a taping of Rachael Ray’s television show last month, we had to quickly find a Plan B. Because, after all, when three moms have carved out a bit of free time, we weren’t about to head back home defeated.

And so that’s how we ended up at The Met Cloisters. It was about a half hour drive from the Chelsea Studios of Rachael Ray, and after a friend had mentioned her visit last year, it had been on my list of “things to do,” but had never quite made it to the top of the list.

There are two smaller parking lots that we saw, and on a Spring weekday, the first lot was already full, so if you’re going on a weekend or in the Summer months, I would target for arriving earlier to make sure there’s a place for you to park. The parking was free and easy to find, and we soon made our way to the building. 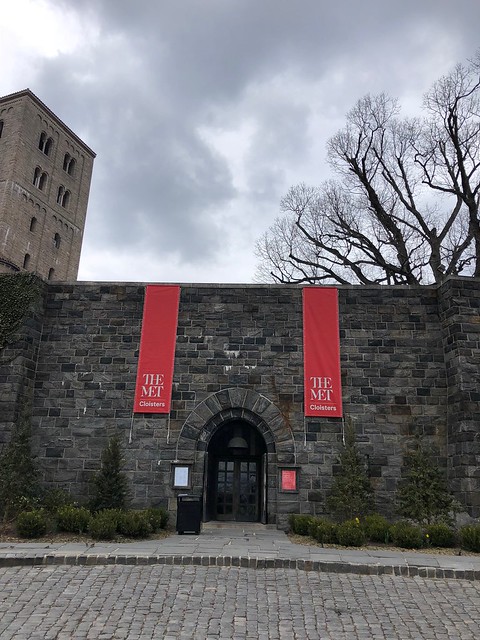 There are a number of winding staircases leading up to the main entry way, and as we climbed the staircases, various signage indicated that admission was “donation only.” 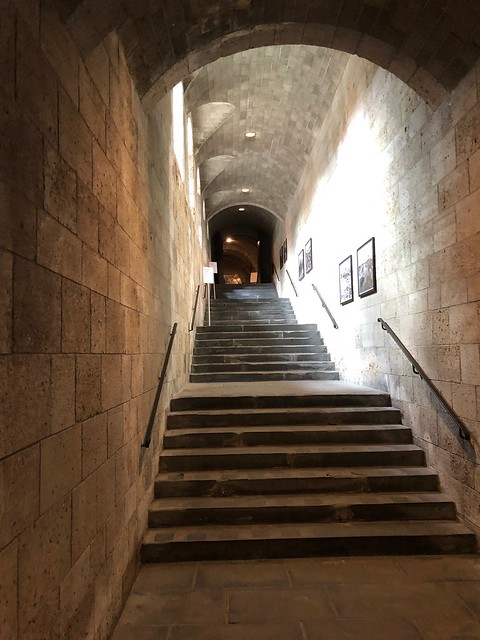 Well, it turns out, that it is and it isn’t.

END_OF_DOCUMENT_TOKEN_TO_BE_REPLACED

A quiet zoo in upstate New York, it’s the perfect place to visit for a bit of family fun. 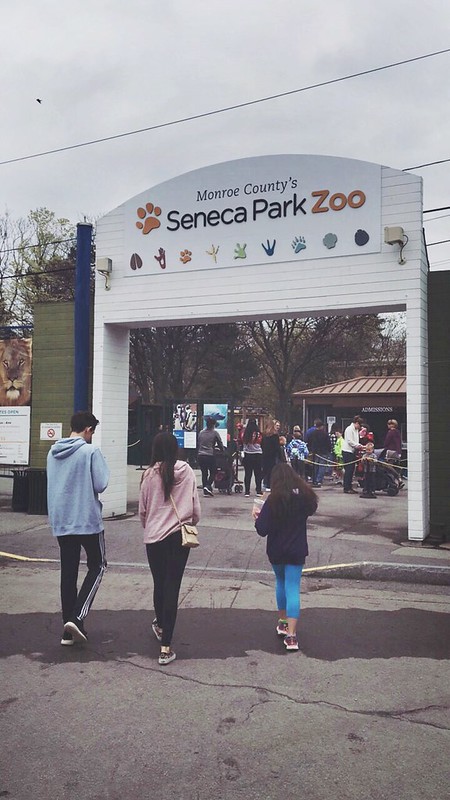 So, last week we were in Canada for a few days (more on that coming soon), and we decided to overnight in Rochester, New York on the way home. When we were eating breakfast in the hotel the next morning, I checked out what was in the area, as we wanted to poke around a bit before heading home. I saw that we were less than ten miles away from the Seneca Park Zoo, a zoo that we haven’t been to, and with my kids, a zoo is usually a sure thing.

Well, it turns out Nick wasn’t in the mood for a zoo, but he also wasn’t keen on my follow-up suggestions of the Jell-O or brewery museums, so with a little gentle coaxing, we were off to the zoo, which pretty much put my 9-year-old in seventh heaven. Because if it involves any kind of animals, she’s all in (and once we got there, Nick admitted that it was a good stop, so win/win). 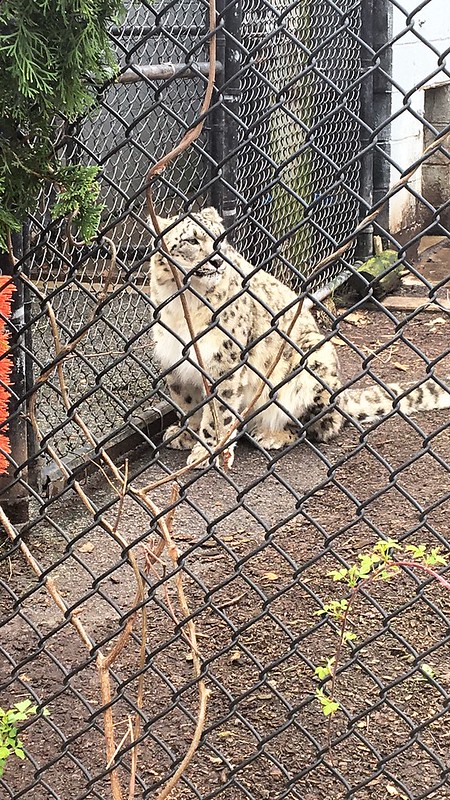 It was really easy to find and parking is free (hurrah for small wins!), and we were lucky enough to find a space near the entrance. I didn’t want to spend the entire day there, because we still had a 4+ hour drive home, but when I saw people leaving at 11:30 am, when the zoo only opened at 10, I figured it was the perfect size for the time we had, and I was right.

It’s bigger than Turtleback Zoo, but smaller than the Bronx Zoo, which made it exactly what we wanted. The zoo was also laid out in a very simple and straight-forward manner. No traipsing all over to find animals you missed, it was actually one of the most cleanly laid out zoos we’ve visited. 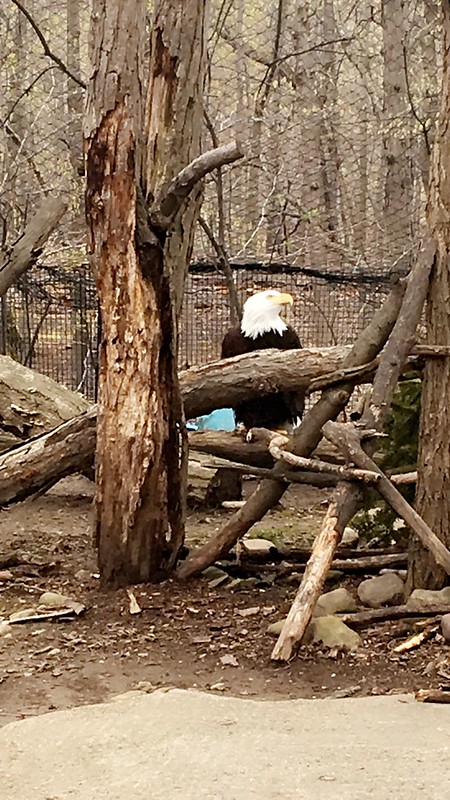 The otter was so adorable and obsessed in doing laps. He looked so zen swimming back and forth in his area, he would swim towards us with his face up, and turn around at the end and flip over and swim back the other way on his back. It was the cutest thing ever. 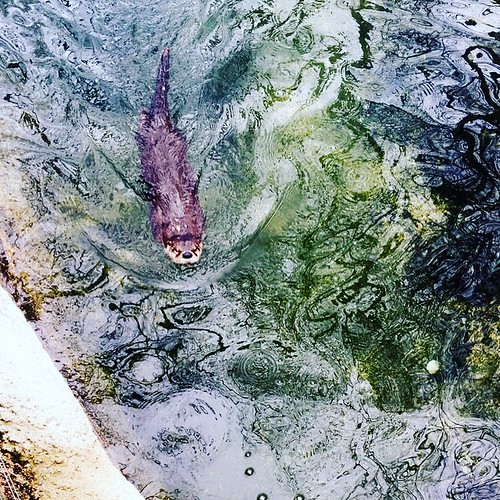 And the baboons? Well, they were so hysterical to watch. So interactive with each other. Whether they were cleaning their nails, looking for bugs in each other’s fur, or chasing their friends around their enclosure, they were just funny, and it was hard to tear ourselves away. 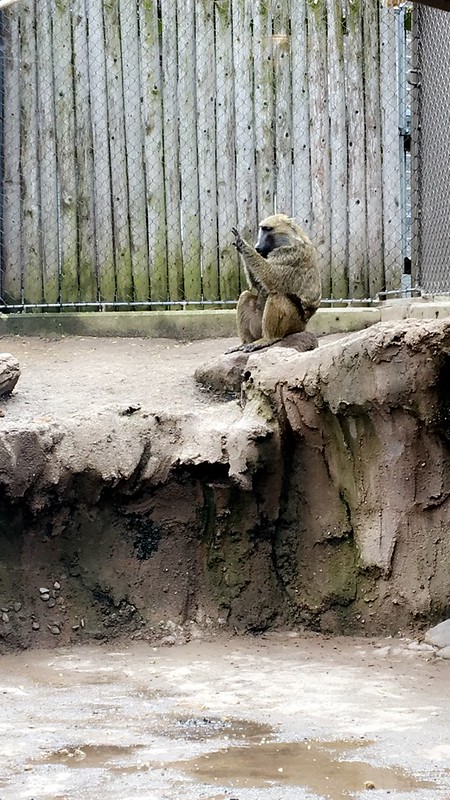 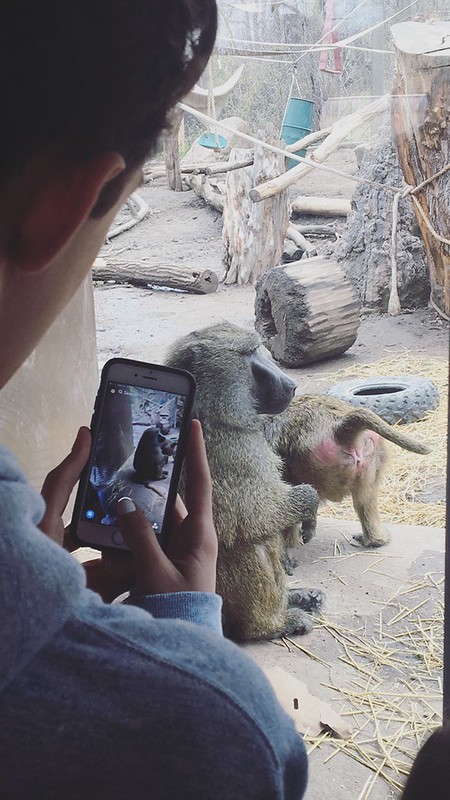 END_OF_DOCUMENT_TOKEN_TO_BE_REPLACED

A bustling restaurant with amazing views right on Lake George. Let’s pop into the Boardwalk Restaurant. 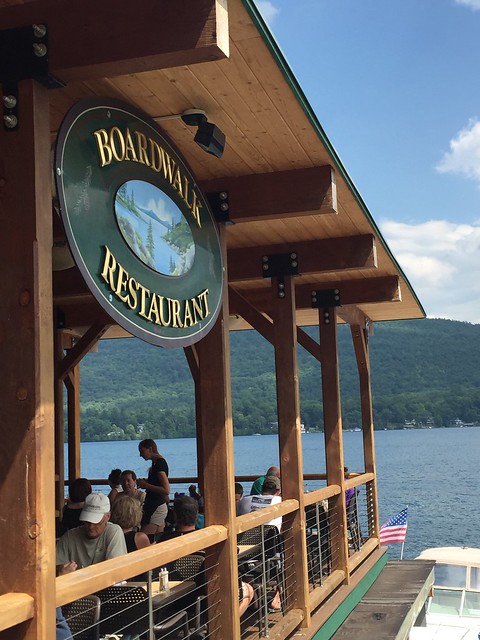 When we were on our way home from Vermont over the summer, I just wanted to get home. You know how that is, right? It’s wonderful to go away, whether it be for a day or a week, but it is so good to come home. But even though I was tired of driving, and didn’t want to add any extra time to our trip, my friend mentioned a wonderful restaurant right on Lake George, which was pretty much on the way home.

And I was sold.

Because, I mean, really. 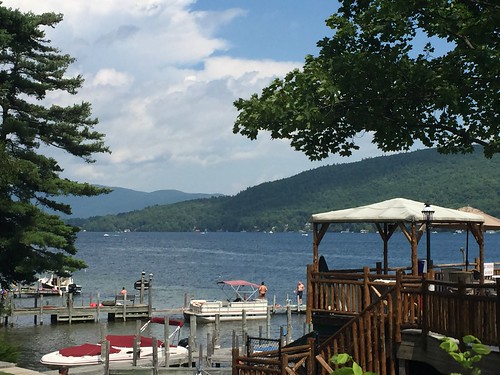 And, well, we needed lunch.

Easy to find off the main drag, the restaurant has its very own, albeit small, parking lot with an attendant. Get your ticket validated when you pay your restaurant tab and that gets you free parking.

Although the restaurant was pretty busy when we arrived mid-afternoon on a Sunday in the summer, they were able to seat our party of seven within minutes. 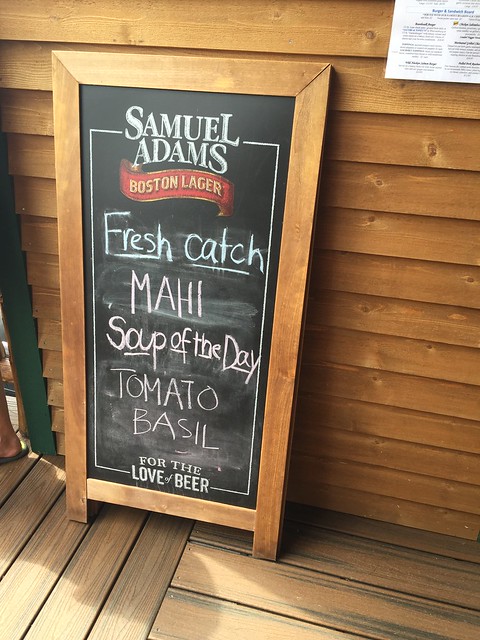 Once seated, I quickly scanned the menu to check out their fish selections. Neither of my kids will eat any fish of any kind … yet … which means if I’m out or they’re not home, I take full advantage to get my fish fix. They’ll come around eventually.

And then I saw it.

It checked all the little boxes of what I was looking for. 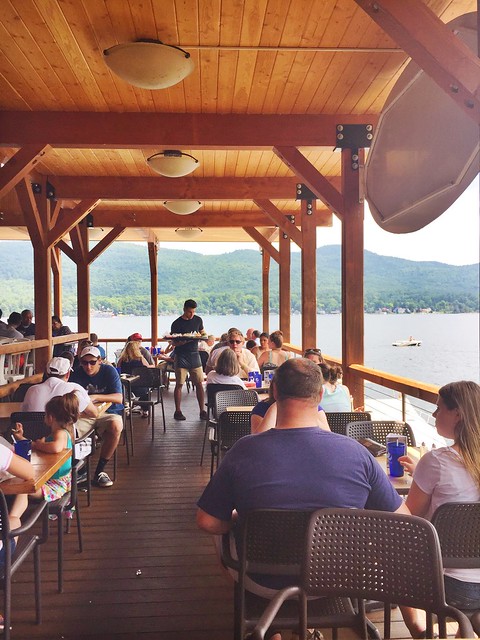 END_OF_DOCUMENT_TOKEN_TO_BE_REPLACED

Looking for something to do with the kids or just spend a little time outside? Let’s visit the Bronx Zoo. 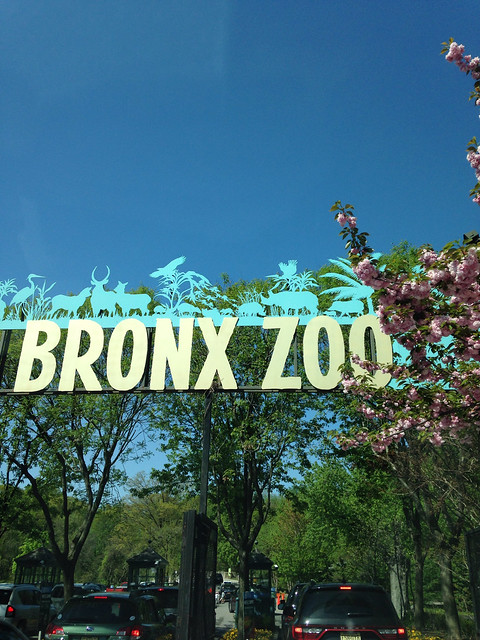 You would think with all our trips to zoos over the years, that we would have long since visited the Bronx Zoo, since it’s so big and one of the closest zoos to our home.

Madeline had never been.

Nick went once on a field trip last year.

If I’ve gone, it was as a kid with my family or on a school trip.

Which means it was a good 35 years ago.

So we have never been as a family and we were clearly long overdue.

It’s kind of one of the reasons staycations are so popular … it’s a good reminder of what is in your own figurative backyard.

So last year, when friends invited us to go with them on Mother’s Day I, of course, said yes. 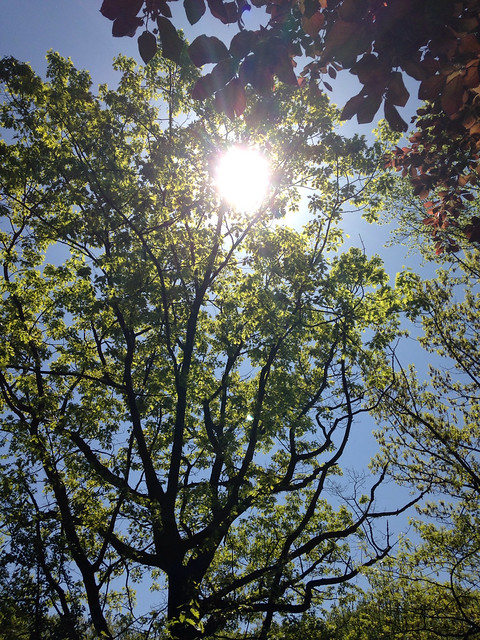 Less than an hour by car, it was pretty easy to get to, and even easier since I just followed them. We arrived close to when the zoo opened, so parking was a breeze, and since they are members, I think they have access to lots that non-members don’t.

The zoo is huuuuuge. 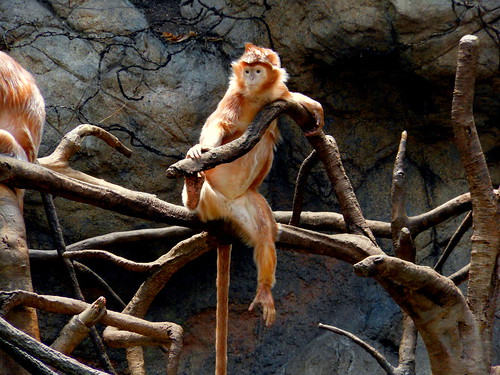 We spent about six hours there and I’m not even sure we did half of it.

Tons of walking, so be prepared.
…

END_OF_DOCUMENT_TOKEN_TO_BE_REPLACED

Looking for a fun, yet historical, day trip? What about a trip to the mansions of Hudson Valley? Vanderbilt … Roosevelt … Let’s go! 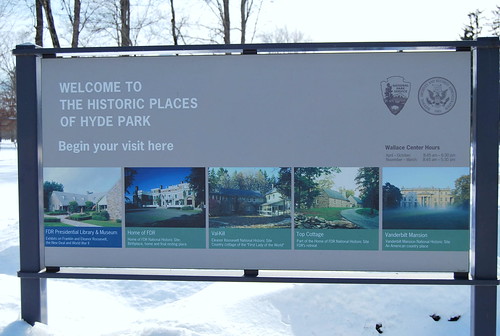 When we visited the Rhinebeck area for our Jones Dairy Farm trip in February, Sarah and I planned to leisurely check out some of the sights before heading home to our kids. You know, before my kids called and asked if I could come home early. We thoroughly explored the downtown Rhinebeck shopping area, and just before hopping on the highway homeward bound, we made quick visits to the mansions in the Hyde Park area. Although a chilly weekend, the scenery was gorgeous nonetheless. 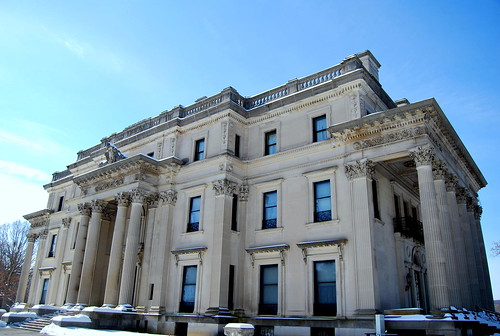 Vanderbilt Mansion was our first stop. What struck me most about this first stop was the sheer immensity of the mansion. All things considered, it’s huge by today’s standards. Which means it was positively ginormous back in the day. The original construction began in 1764, when the Gilded Age was all the rage. It sits on over 200 acres of beautifully maintained grounds, just east of the Hudson River. It is a National Historic Site, and with its proximity to New York City and the railroads, the mansion became prime real estate in the Hudson Valley. With over 54 rooms, it was the epitome of grandeur, and in the early 1940s, parts of the mansion even served as quarters for President Roosevelt’s Secret Service to stay. 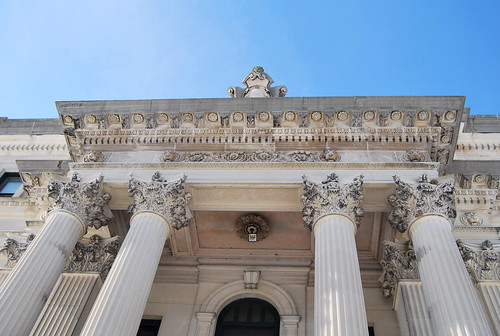 One hour guided tours are available daily, and entrance to the grounds and parking are free. There is a small gift shop inside the visitor’s center that features great little treasures and souvenirs. 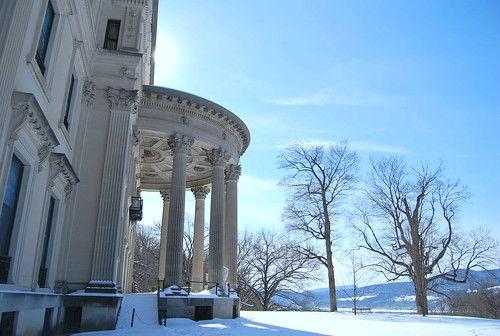 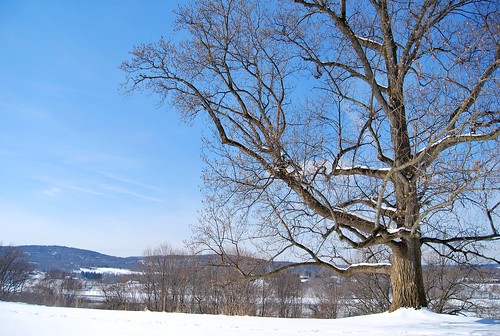 END_OF_DOCUMENT_TOKEN_TO_BE_REPLACED

Looking for a quaint little getaway? Look no further than Rhinebeck, New York. Have dinner at the Culinary Institute of America, shop in tiny boutiques along the downtown streets, and grab some zzz’s at the oldest inn in America. When I visited the Culinary Institute of America a few weeks ago, the weekend included a stay at the Beekman Arms, a very quaint hotel in downtown Rhinebeck, and the oldest inn in America (its wonderful history can be found here). Located in the main shopping/restaurant section of the downtown area, it has boasted many famous guests along its 300+ year tenure so far, including Presidents George Washington and Theodore Roosevelt. The hotel features a main house with guest rooms, and additionally, a few houses within a few blocks of the main house that also include many guest rooms. 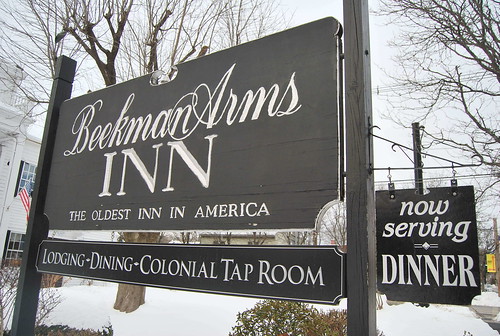 Very easy to find, with parking lots right behind each building, we checked into the main house and, while there, got a peek at their bar and restaurant area. Filled with antique furniture, historical artifacts, and gorgeous wooden beams, it was warm and cozy. 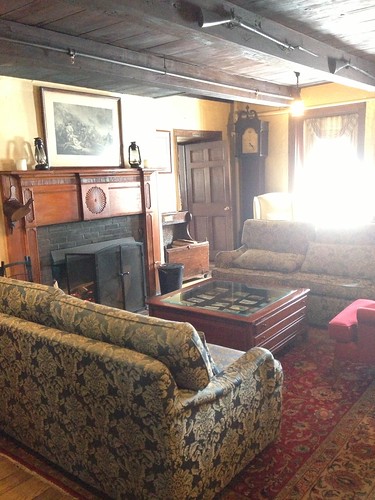 Sarah and I were both staying at the hotel, though we ended up with very different rooms in adjacent buildings. Her room was an upstairs single with dark blue walls, a tv, and small bathroom, all nestled into the eaves of the house. Mine was a short distance away, a first floor suite, complete with tv room, pull-out couch, day bed, king size bed, and a large bathroom. At the surprisingly affordable price of $145.00.