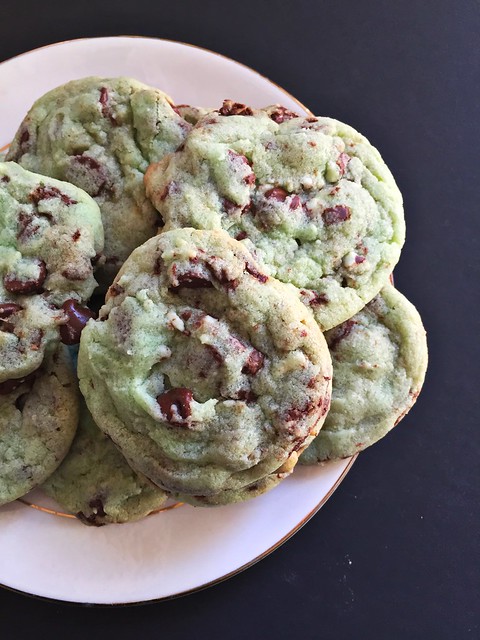 I haven’t had a hand-held mixer since a million years ago before I got married. Back then, I used it ALL THE TIME, but then soon after I got married I got a Kitchen-Aid stand mixer and never looked back.

When the good folks at OXO ask if I wanted to try their new mixer, I jumped at the chance. 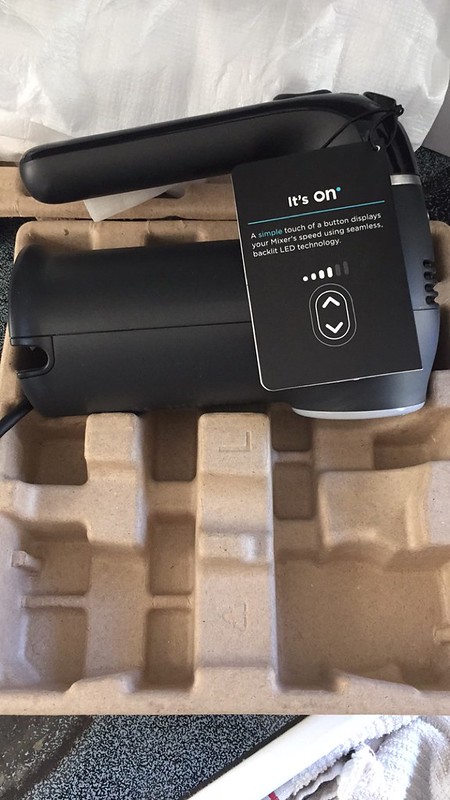 Mostly because my hand-held mixer of yesteryear was LONG GONE, and there many times during the week that I look at the Kitchen-Aid on my counter and really want that counter space back.

I have it there because if it’s out in plain sight, I will use it more.

You get my drift. 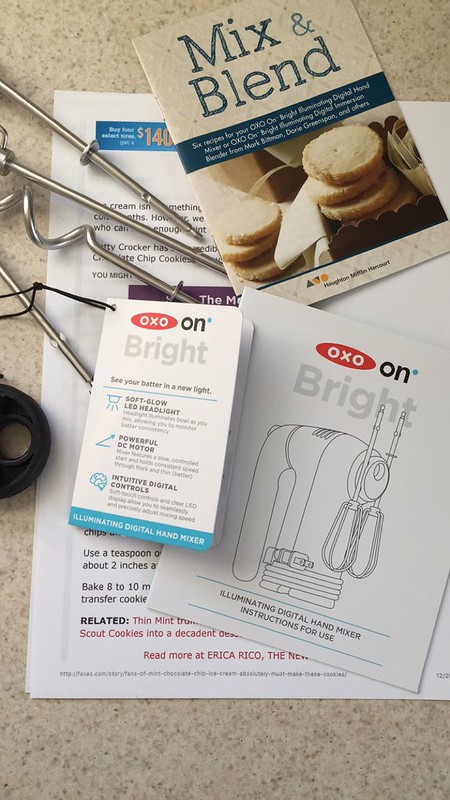 When I was initially reading the details on this new mixer, I noticed that it featured a headlight.

Yes, a headlight for your mixer.

And I will be quite honest, I thought that was a little bit ridiculous.

What could you possibly need a headlight for?

But then I used it.

You need a headlight for your mixer.

I even took a short ten second video for you, so you could see how illuminated the inside of my mixing bowl is:

Although I was doing my baking in the early afternoon and it was sunny outside, you would think the headlight feature wouldn’t have been that big a deal.

You would be wrong.

I could suddenly SEE everything in my bowl. It’s like you don’t even realize how dark your bowl and batter is until it is suddenly all lit up.

It was the coolest thing ever, and I was instantly a convert.

There are, of course, other highlights to this mixer. It comes with the standard beaters, and also pastry hooks, and a handy little thing on the front where you can attach the beaters to the mixer. Very convenient, although I did secretly wish it came with a little case or even just a bag to keep it from getting dusty when stored.

The other thing I noticed … you know when you’re mixing, sometimes you feel like being a rebel and don’t hold the bowl … and then you’re sorry you didn’t because there is batter everywhere?

No need to worry with this one. The motor is slow and steady and even with me not holding the bowl, the mixer didn’t get all crazy and my bowl stayed put.

It’s the little things, what can I say?

Now … what did I make with my first foray with this mixer? 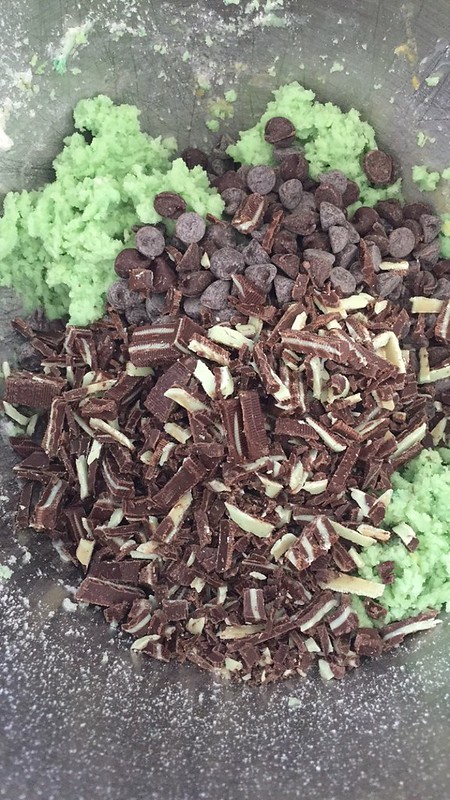 Nick had a holiday party tonight with his Leaders club, and this was the perfect thing to make for a crowd of teenagers. With the Andes candy chunks throughout, and the mint extract, no denying the flavor.

Fresh out of the oven? Amazeballs.

I will admit, the green color is a little off-putting at first. The kids said the cookies looked like they were sick. My mom said she was hesitant to take one too. But once they bit into them… all bets were off. And you could, of course, skip the green food coloring, but where’s the fun in that?

Two quick notes and then I’m off … WATCH THE BAKING TIME CAREFULLY. Can you tell which cookies are overdone? 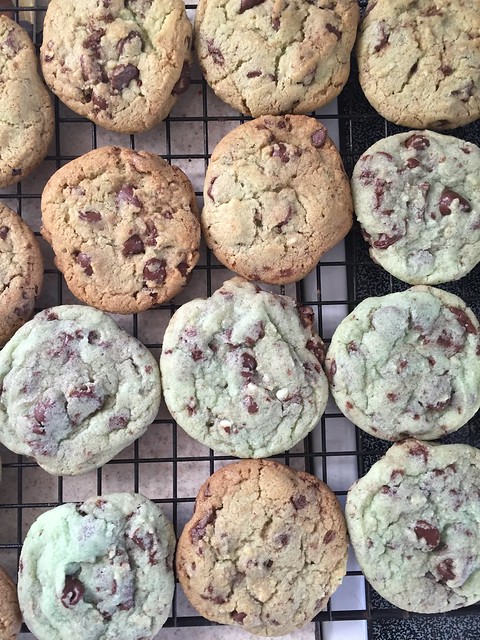 And two, don’t use the mixer when you’re mixing in the chocolate pieces – that will make your batter a gross muddy color, and ain’t nobody got time for that.

END_OF_DOCUMENT_TOKEN_TO_BE_REPLACED I knew I had one other post topic planned for this week.  And, of course, I remembered as soon as I hit publish on last night’s post (and the mention of what’s coming up this week).

Do you happen to have leftover corned beef?

Then this one is for you.

It was a no-brainer, really.

And getting rid of a leftover.

Actually two leftovers, if you count the beer.

All in one fell swoop?

Even better?  The fact that the recipe is for one sandwich.  So the kids happily got their request of pancakes (made easier by freezing some homemade buttermilk ones late last week), and I got total comfort food.

The only thing I did differently in the recipe was that I used far less Guinness than it called for.  The original recipe said to use a cup.  I used what was leftover in a bottle that was opened for an Irish Dubliner and Guinness Fondue I made on Saturday night.

Which also means we’re chasing the walk-more-than-25-miles-this-month train too.

And by we, I mostly mean me.

The recipe also called for Cheddar.  Although it didn’t specify a kind, I used Kerrygold.  I mean, really.  Irish cheese for an Irish-food-inspired comforting grilled cheese sandwich only seems natural, right?

And man, if you haven’t discovered the heaven that is Kerrygold cheese, you need to seek some out.  I’m hoping they seek me out and ship me vast amounts of the stuff.

Because life can only get better with more of it.

(You can find the recipe for the sandwich right here.)…

END_OF_DOCUMENT_TOKEN_TO_BE_REPLACED I am hardly scientific when it comes to cooking or baking.  I’ve always been a fly-by-the-seat-of-my-pants girl.  Outside of the kitchen too.  But recently I’ve slowly come to appreciate better measurement devices when it comes to kitchen tools.  Although I still, um, use the same measuring cups when it comes to portioning out liquids versus mass, I am at least trying to be a little more conscious of it.  Hey, if it ain’t broke, don’t fix it, right?

As far as food scales go, I had one years ago and gave it up in the interest of gaining some valuable real estate back in the kitchen.  I hate when my kitchen gets bogged down with a lot of extra gadgets and the like.  I don’t use bread makers, pasta machines, or ice cream makers.  Instead, a lot of double-duty tools, and items that have to earn their space in my cupboards and drawers, you know?

That being said, I actually wrote “food scale” on my refrigerator notepad some months ago, intending to keep my eyes out for one that was on sale.  And then the generous folks at the OXO Blogger Outreach Program offered one up for grabs.  For me.  And for you too!  It was too good an opportunity to pass up.  For both of us.  It’s sitting right here on my desk, waiting to be fedex’d to you.  The slim design is perfect for stashing in a cupboard, within reach when you need it, but small enough to not waste space unnecessarily.

I just started using it this week, and I’ve got to say, weighing things is kind of fun.  And addicting.  Last week, I read that Katrina Markoff, the brains behind the amazing Vosges chocolate line, uses beakers in her kitchen to measure everything (like these on Amazon).  (You can read her own blog right here).  How cool is that?