A super fast, mega delicious dipping sauce that is perfect for all your upcoming Summer BBQs. 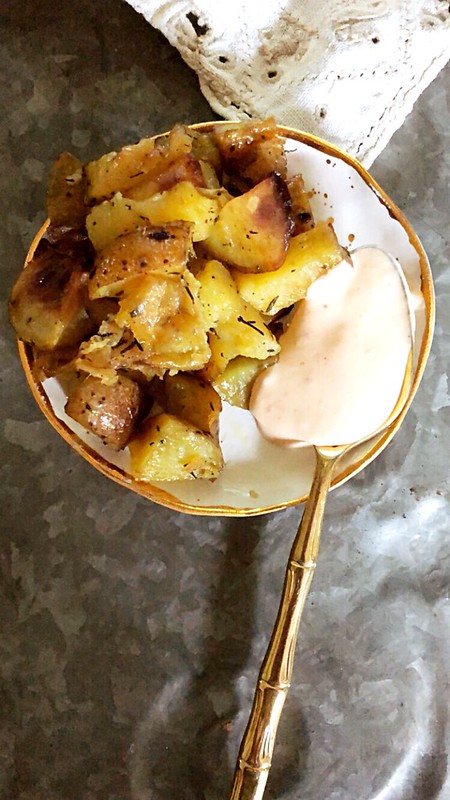 I host cooking classes and food tastings at a variety of locations. I have been doing it for two years now, and have about a dozen different places that I hit regularly. Sometimes I pitch concepts and recipes to my client, sometimes they ask for something specific.

But most times? I’m figuring out the recipe at the eleventh hour.

Part of it is that while I am a bit of a planner, I also have a whole lotta “fly by the seat of my pants” in me too. It can make for a very chaotic life sometimes, perhaps more so than necessary, but it’s served me reasonably well so far, so if it ain’t break, why fix it?

All that to say that I finally decided what I was making for a class last week at 11 pm the night before. I had pitched “unique BBQ recipes,” but just hadn’t settled on exactly WHAT that meant.

If you’ve been a regular visitor here, you know I love my condiments and dipping sauces. Like… LOVE. So I started brainstorming about other ways that I could use a BBQ sauce, because I was bringing a friend to present with me, and she owns a gourmet food shop that carries the Stonewall Kitchen line of sauces.

BBQ sauce tends to be high in sugar, so although I love all things BBQ, I tend to steer clear of a lot of it unless I make it myself, because it’s not exactly Whole30 or clean eating. So while I was brainstorming for this particular class, I was trying to think of ways I could make a sauce that was healthier.

As I was talking to the class attendees, I was telling them how much I really dislike Greek yogurt. Like, I’ll eat it drizzled with honey and topped with fresh fruit and granola… which means I pretty much do what I can to cover up the actual taste of Greek yogurt. Which is how this dipping sauce came to be.

I roasted a whole sheet pan of Yukon Gold potatoes (my favorite) for the class and everyone seriously devoured them.

Everything is better with a dipping sauce, I’m telling ya.