Thick, rich and hearty, this Bolognese sauce is perfect for a lazy Sunday supper, or to stockpile in your freezer. 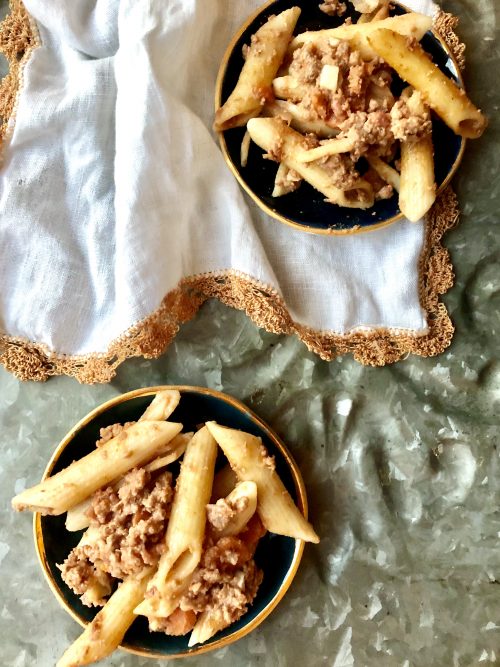 I sometimes see posts making fun of how bloggers will write four paragraphs as a preamble to the recipe, when all readers really want is the recipe. I do sometimes feel that way too, but in the interest of a happy medium, let’s do a few lines of a brief description and get right to the star of the show … this Bolognese Sauce.

I got this recipe from an old friend a million years ago and have tweaked it along the way and the end result is a thick and hearty pasta sauce that will warm you from the inside out. This is one of those recipes that you take a small taste from the pot to see if you have to adjust your seasonings and then you find yourself going back for more. Three meats, carrots and onions, a couple other simple ingredients and a low simmer for just under two hours. I usually double the batch and freeze half of it to save me on a busy weeknight. Add some garlic bread (this one is a favorite) and a nice green salad and you have the perfect simple and delicious meal for company.

In a large, heavy-bottomed saucepan, heat the olive oil and butter over medium heat. Add the onions, garlic and carrots and sweat over medium heat until the vegetables are translucent and soft but not browned (10-15 minutes). Add the beef, pork and pancetta and stir into the vegetables. Add it over high heat, stirring to keep the meat from sticking together until browned. Add the tomato paste, milk, and wine and simmer over medium-low heat for 1-1 ½ hours, stirring occasionally. Season with thyme, salt and pepper to taste.

Whether you’re obsessed with Panera’s macaroni and cheese, or you’re just looking for a recipe that embodies comfort food, this dish is the perfect thing to serve up this month. 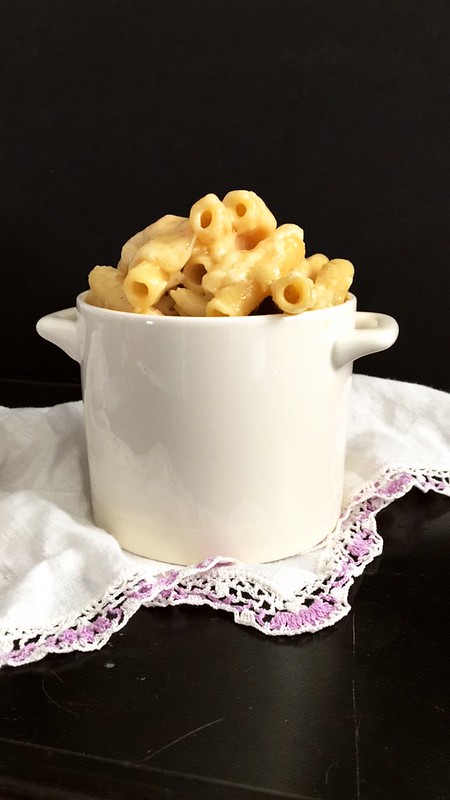 Truth be told, I’m not even sure why I make macaroni and cheese anymore. My kids used to LOVE LOVE LOVE it. Now … it just doesn’t excite them as much anymore.

I would say their taste buds are growing up, but I still like mac and cheese, so that’s clearly not it.

No matter, I still make it occasionally when I’m looking for an easy yet filling meal, and bonus points for a version that is quick to make and only dirties one pan.

Because, really, who wants to toil away in the kitchen any longer than necessary?

If you’ve been to Panera in the last few years, you might be familiar with their mac and cheese. Super creamy, very definitely cheesy, it’s the kind that seriously sticks to your ribs. So when I saw a recipe for a knock-off version, I had to try it.

Plus I had all the ingredients on hand, so win/win.

The recipe is as easy as it looks, with the most complicated part of the directions being to continue to stir the pasta as it cooks in the milk.

I can handle that.

For the cheese, since I do a lot of work with Cabot, I, of course, used freshly grated Cabot cheddar. The seriously sharp cheddar to be exact. I prefer to grate it as needed, instead of buying the pre-shredded bags. It just tastes so much better. 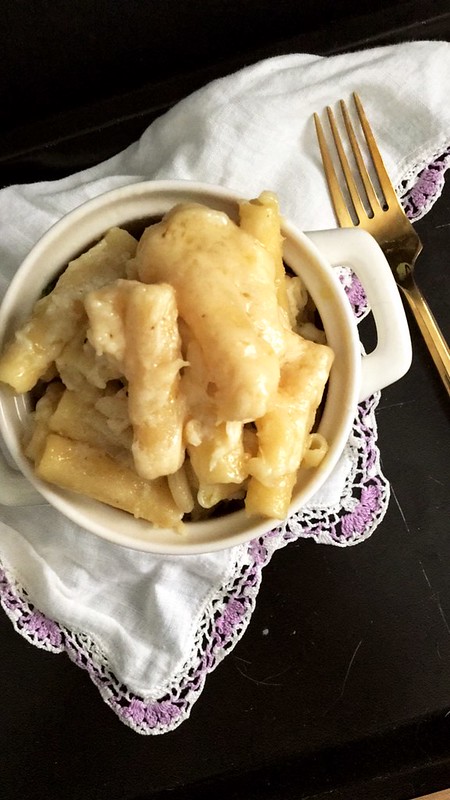 It’s pretty darn close, and I would definitely make it again. I served it alongside roasted broccoli (my kids’ favorite vegetable/preparation), and it would be great with the broccoli mixed in, or with pieces of grilled chicken mixed in, for a little variation.

However you serve it, it’s a less-than-thirty-minute meal that will warm you from the inside out.

Hungry for more mac and cheese recipes?
For a more upscale, fancier version, this recipe is still one of my favorites, as is this five cheese version. So decadent and worth every calorie.

Hope you have a great weekend!
…

END_OF_DOCUMENT_TOKEN_TO_BE_REPLACED

A crowd-pleasing recipe that is quick enough to whip up on a weeknight and will keep ’em coming back for more. 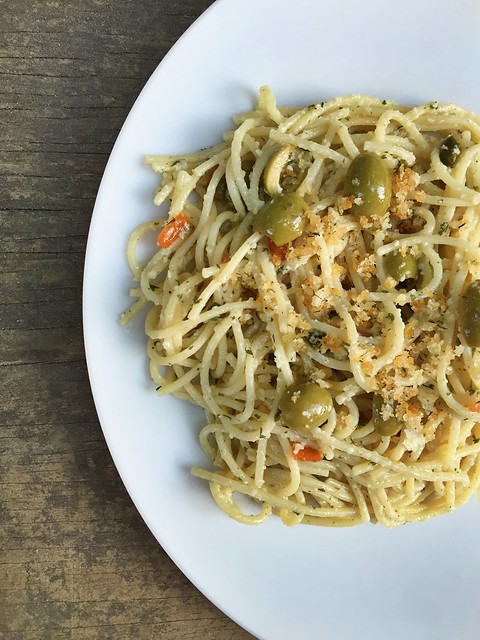 Every once in awhile, I stumble upon a recipe that everyone in my little family approves of.

(The sausage puffs last week were also that)

Maybe one out of every eight recipes?

But when I can just MAKE something and have everyone EAT IT?

That there is a good time.

This recipe originally appeared in the June issue of Bon Appetit magazine, and I love how quick and easy it is.

Even with cats, dogs, and kids underfoot.

Pasta dishes, for the most part, are usually a homerun in the O’Malley household. And Nick LOVES green olives. I, for one, adored the bread crumbs.

And NO ONE knew they were eating anchovies.

Because, if you didn’t know, if you mash or cook anchovies, there is no fishy taste AT ALL. Mashing or cooking them just bring out their saltiness.

Trust me, because I hate anchovies.

Now that the homework, sports, cheer, scouts grind has started, recipes like this are exactly what you need in your back pocket. You can easily keep the ingredients stocked at all times and have a good, solid dinner on the table in half an hour.

END_OF_DOCUMENT_TOKEN_TO_BE_REPLACED

A quick pasta dinner where bacon shines … kid-friendly, adult-approved, and perfect for company.

I’ve got to say, I might have salivated a little when I saw the most recent issue of Food Network magazine. 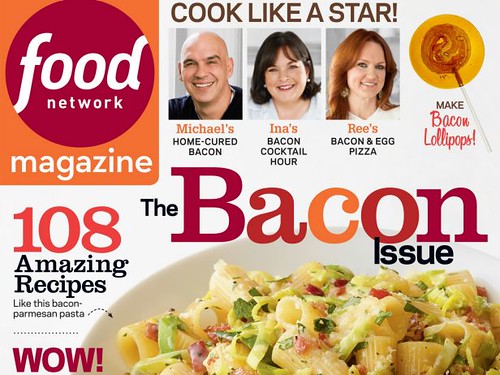 When it arrived, we were in the midst of planning a dinner with friends. Chrissie saw the cover recipe and said, “Make that, I’m coming.”

And then there was a plan.

You know the whole spiel that you shouldn’t try out new recipes on company, right?

I threw caution to the wind.

Spit in the face of failure.

And delivered a delicious meal in the process. 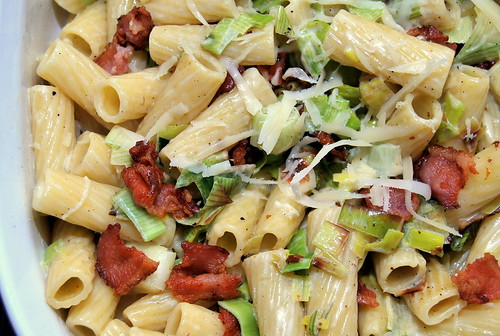 Would you believe I’ve never had leeks?

This was my first time, and they couldn’t have been easier to prepare and blended so nicely with the heavy cream.

Seriously, though, is heavy cream ever not gonna work?

Especially when you pair it with the likes of bacon.

The crispier the better.

The recipe said 15 minutes, and it was spot on. Which meant it was perfect for entertaining. We chatted in the kitchen while I made it and put the finishing touches on the rest of our meal. It wasn’t a high-maintenance dish, which means it didn’t go south when we started talking about boys, ex-husbands, school bullies, and tattoo adventures.

Which is pretty much my favorite kind of recipe. Who needs high maintenance?

The only thing I changed was to add more bacon. Because. Well, bacon. And also because, as we rationalized, as a recipe from the BACON issue, and a dish that had BACON in its name, four slices just weren’t gonna cut it.

So I think I added seven.

And our starter? These bacon-wrapped jalapenos. And, um, the entire plate of everything was gone by the end of the night.

Pretty much my favorite way to end a dinner with friends.

Hungry for more bacon recipes?
These Flourless Peanut Butter & Bacon Cookies are so light and so good!
Our dogs go crazy for these homemade Peanut Butter & Bacon treats and I bet yours will too.
This Hot Bacon and Cheese Dip is pretty much my favorite.
Bacon Cracker Appetizers … addicting!

END_OF_DOCUMENT_TOKEN_TO_BE_REPLACED The week before we left for vacation, I was quite practical and made sure to use up as much food as I could from our refrigerator.

Waste drives me crazy, and I didn’t want anything going bad in our absence.

Although it made for a few boring, ok and weird, meals, it was a good plan.

Until we came home.

Because said refrigerator was, of course, pretty bare. And since it was Easter Sunday and a busy day, there was no time for a grocery store run.

And this is where a well-stocked pantry and freezer can save your hide.

Although I didn’t have every single ingredient, I did have the lion’s share. Broccoli from the freezer. Pasta in the pantry. Olive oil, butter, lemon juice, and pine nuts all on hand already.

It came together in nothing flat, which means it’s the perfect meal for when your weeknights are a little hectic.

And if you’re like us, that means currently juggling homework, track practice, Scout meetings, and soccer.

Sometimes all on the same night.

While the inclination might be to find the nearest drive-thru, this recipe will save you from that.

So thank you, Curtis Stone and broccoli from the freezer. I think I love you.

PS If you’re looking for more easy recipes from Curtis Stone, he has a new cookbook coming out next week, What’s for Dinner? Delicious Recipes for a Busy Life.

END_OF_DOCUMENT_TOKEN_TO_BE_REPLACED When it comes to kids and dinner, there are a few must-have ingredients in your kitchen cupboard.  For me?  Canned tomato products (paste, sauce, crushed tomatoes) and pasta are at the top of the list.  I’m a big fan of the Tuttorosso brand, flavorful but not heavy-handed, as a starting base for a pasta recipe.  When the day is long and inspiration is short, I know I can whip up a quick pasta dinner, and the kids will be happy.  And when they’re happy, I’m happy.  It’s a pretty simple equation.

Although I have the occasional jar of pasta sauce on hand, I usually make homemade tomato sauce.  Some days (usually the ones that start with an S), it means a long-simmering sauce on the stove.  Others, it’s a quicker version.  You can still make a very homemade tomato sauce with pantry staples and skip the jar stuff.  Which is much better for you.  In my humble opinion, of course.

In my ongoing guilt over not making enough Italian food, I decided tonight was a good night for stuffed shells.  I haven’t had them in f-o-r-e-v-e-r, it’s easy for a weeknight dinner, and everyone can leave the table with happy, well-fed, warm little tummies.  Even this happy little sous chef.